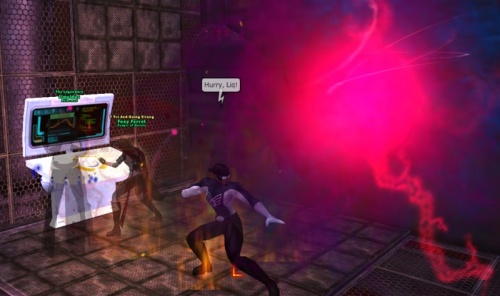 Dark matter is an energy that originates from the edge of the universe from space known as the "Dark Matter Zone". The DMZ was first discovered by Kellon Faris, a Crey employee who theorized the energy was pulling galaxies apart as stated in the expanding universe theory. Dark matter is incredibly powerful, but it manipulates human brain function, driving people insane. Such was the fate of Kellon Faris, who found himself so overtaken by the energy that he was eventually fired from his job. He developed "Darkness Armor" which was powered by raw dark matter from the DMZ and became the supervillain Exadeus.

For several years the only expert on dark matter was Exadeus and he had no intention of sharing his discoveries with anyone else. Crey continued researching the subject, but was sidetracked by other endeavors such as the Revenant Hero Project or the Terra Jones Project. Following a battle in Warburg, Exadeus was arrested and sent to Strongwall Penitentiary. In the following years, dark matter was virtually non-existant on Earth. However, Cyborg Sinister initiated a breakout at Strongwall in 2011, the first in the prison's history, and Exadeus managed to escape. 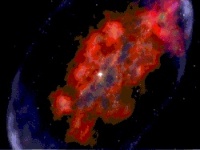 Only a few people are able to manipulate and control dark matter, Exadeus being the most adept at it. The Masked Renegade is able to control small amounts of dark matter due to his telekinetic abilities, but over-exposure to it will still result in him going insane. Syndicate boss Severo Dante had his molecules merged with dark matter after being blown up by a dark matter bomb by The Masked Renegade. This granted him shapeshifting abilities and he became the supervillain Deadwringer.

Some criminals are in the possession of dark matter-infused weaponry. The "Queen of the Warriors", Athena, wields a dark matter-infused blade and mob boss Tucker Clay had his laser cannons augmented with a dark matter reactor which was sold to him by Exadeus. He then used those lasers to try and kill the "invincible" Coldcrash. Coldcrash was not killed by the blast, but the dark matter he absorbed knocked him unconscious and slowly drove him mad, as it did to Exadeus.

It was discovered later that "dark matter wells" exist on Earth, believed to be connections to the Dark Matter Zone or left-over from some sort of cosmic intervention. Currently there are only three that are confirmed. One in Guatemala that lies near to the Mayan Temple that houses the Mass Eradicator. Another exists in Paragon City, in the tunnels underneath Eden. The final one is in Giza, underneath the Pyramids. There may be others, but those three are the only ones known to exist for certain.

Dark Matter's versatile energy lends itself to being a highly sought after source of weaponry. It can be wielded as projectile energy, or as a means to augment one's own strength. There is no known limit to what the strange power source is truly capable of. The first known use of Dark Matter in weaponized form was by Kellon Faris after building the first version of his darkness armor. It was only then he saw it's many capabilities and soon upgraded to the traditional armor he wore the entirety of his career.

The armor allowed him great strength, well beyond what was natural to the man otherwise. He was also able to manipulate the energies as a form of protective shielding, and force blasts. Kellon Faris is the only known human to show a great understanding of the substance which could be due to it's psychological side-effects. Kellon once theorized that the Dark Matter was sentient - if this was true he could have formed a unique bond with it.

Kellon also offered Dark Matter weaponry to major city gangs. Both mob bosses Tucker Clay and Showtime were sold a large cache of dark matter guns to use on their enemies, which at the time, included The Infiltrators. Clay's own personal arsenal was given an upgrade with Dark Matter Core's he could install in his Uber-Lasers (cybernetic arms), allowing him to now blast deadly amounts of the energy. Athena, of the Warriors was also given a powerful Dark Matter blade which could cut thought anything with ease. She used this weapon to take and then secure her position within the ranks of The Warriors for several years.

When the hero Zex accidentally discovered how to draw power from the Dark Matter Zone, it slowly corrupted her perception of reality and perverted her heroic persona. Calling herself "The Iron Tyrant", Zex created a suit of armor that used Dark Matter as a power source. The Iron Tyrant suit offered her deific strength and a nearly impenetrable shield, as well as the ability to manipulate Dark Matter to emulate telekinesis, teleportation, and destructive beams of energy. The Iron Tyrant was in the process of creating an experimental Dark Matter explosive named "Trinity", but was defeated before it could be finished.

Side Effects of Dark Matter