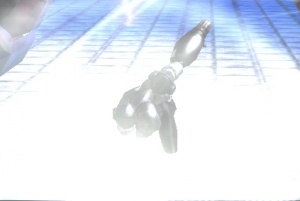 Lucas "Instaport" Rousseau is a professional supervillain and brilliant inventor. Rousseau was a greedy French engineer who sold a prototype reactor for several thousand dollars instead of giving it to the French government. He was hailed as a sell-out by the media and his career took a drastic turn for the worse. He was forced to move to the United States to start fresh, but his bad past followed him. The only job he was able to get was working as an engineer at Crey.

While in Crey employ, he built a suit of power armor and unlocked the secret of teleportation. Crey discovered this and moved in to kill him and take his suit. In the heat of the moment, he activated it and teleported away, saving his life. This ability became his trademark "instaport" as he joined the ranks of criminals everywhere, mainly acting as a getaway driver. He called himself Instaport after his signature skill.

Instaport eventually joined forces with Exadeus, acting as his personal chauffeur and at one point, instaporting him into an experimental portal facility. Exadeus took control of the facility and used the portal to access the Dark Matter Zone and bring back The Masked Renegade as part of a deal with Replacer.

Exadeus gave Instaport to Amon Aser to be arrested and incarcerated into Strongwall Penitentiary, but Exadeus merely did so to make Aser believe he was on board with building a prison in the Dark Matter Zone. Exadeus took advantage of Aser's resources to take over his prison and use it as a stage for an all out invasion. During Exadeus' attack, Instaport escaped the prison after a quick altercation with The Challengers and found himself at large once again.