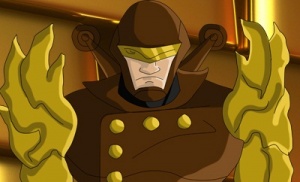 Marcus "Mega Midas" Goldwater is a professional supervillain and member of the high tech thieves known as the Gold Brickers. Goldwater had his skeleton fused with gold during a botched heist at a Crey facility. His newfound superpowers launched him to the top of the pack in the Gold Brickers and he became the bodyguard and most dangerous ally of King Midas. He originally went by the name Goldmonger.

Mega Midas' main motivation is wealth, through any means necessary. He often fights with a pick-axe or with a hammer made of gold. Mega Midas' arms and feet are usually encased in gold as well, leaving the only un-armored part of his body his head. All of this makes him a walking wrecking ball and a tough fight for any seasoned hero. In July 2012, he gained the ability to turn objects into gold just by touching them.

In early 2011, Goldmonger was arrested by Longbow during a daring attempt to steal high-tech weaponry from Agincourt. He was processed and sent to Strongwall Penitentiary where he spent two months before Cyborg Sinister hacked into the mainframe and initiated a breakout. After that, Goldmonger enjoyed several months of freedom and at one point came into the employ of the supervillain Smog, who had set his sights on the only remaining family of Nimbus after his identity was outed by Phanto.

During the final weeks of 2011, Amon Aser had Goldmonger captured by heroes and brought to him. He was re-incarcerated in the improved Strongwall Penitentiary and Rehabilitation Center and began psychotherapy courses with Aser. He only remained cooperative when heavily sedated with Aser's specialized drugs. When Exadeus took over the prison in order to access the dark matter zone, Goldmonger once again found himself fighting members of The Challengers. He was knocked out, but hobbled out of the prison while The Challengers faced Exadeus. It is believed that Goldmonger has finally decided to make a move and try to usurp King Midas as supreme leader of the Gold Brickers.

In the summer of 2012, Phanto's captive scientists at Styx Industries contacted Goldmonger and invited him to become the test subject for a molecular manipulation experiment. Though the experiment was originally thought to fail, the process unlocked a new power for Goldmonger, known as the Midas Touch. With this new power, Goldwater retired the Goldmonger persona and adopted a new villainous moniker, Mega Midas.