Oi! If it wasn't fer you Yanks and yer stupid laws... Me name? Me name's Polly, Polly McCracken. And yeah, I'm short! I'm twelve fookin' years old, ya bloody stupid berk! It don' help that I'm the smallest girl in me public school, neither. At least I started developin' last year and got me some proper baps.

Thanks. Ah, yeah, that's the thing. 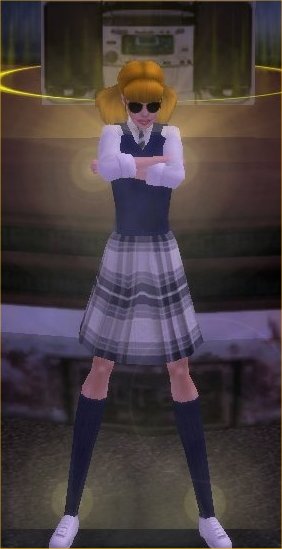 So like I was sayin'... Yer bloody Yank laws on what makes fer a super are fookin' mental. I was on hols in Paragon City -- yeah, by meself, ya wanna make somethin' of it? -- and I gets jumped by a crowd o' wankers in skull masks. On a street corner on practically the High Street, in broad daylight yet! And they're like, "let's have yer ready, girlie, we wants yer lunch money." And I'm saying, "You lot are fookin' stupid if yer tryin' to rough up a St. Trinian's girl."

An' they just gets mad and tries to grab me goodies, but hell, the sixth formers are better at snaggin' stuff off younger girls than this lot is, so I just dodge'em and pull out me field 'ockey stick and go to town, showin' 'em who not to mess with, ya know? It was brill, they went flyin' every which way. I even put one through a plate glass window which was fookin' cool if I do say so meself.

Next thing I know these Canadian-lookin' wankers with big guns are all around me and like, "Yer under arrest, girlie, fer yer bein' an unlicensed vigilante wi' super powers." An' I'm like, "Vigilante, 'ell -- I'm fightin' t' keep me ready in me pocket where it belongs. An' what bloody super powers? I'm a schoolgirl with a 'ockey stick!" And the one with the biggest gun says, "Yeah, an' I'm the Queen Mum. Come quietly like, or else."

Now that's like the one thing ya never says to a St. Trinian's girl, so I just had to give 'em what for. But there was more o' them than there was o' me, and they dragged me down, dammit. They have me in the dock right fast after that, and the judge just looks at me like a cow what's been hit between the eyes wit' a sledgehammer (you lot ever try that? Loads of fun) and says, "Well now, this is somethin' the law didn't anticipate none, we don't have no special accomodation fer 12-year-olds what have super powers and break the law."

An' I yell at him from the dock, "I ain't got no fookin' super powers, ya stupid git, I'm a field 'ockey player from St. Trinian's in the bloody U.K." An' the judge gets all pale just like the ones back home do, an' he says, all serious-like, "Until we gets this puzzle figgered out, we must protect both the public an' this young lady. Put'er in the Zig, minimum security with a matron from Child Welfare, until a determination is made."

Now I don' know what a "Zig" is, but it sounds like a bloody gaol, so I raise a right fuss about getting me barrister fired (and did I mention they gave me one? Bloody useless 'e was, too) and I fight back when they try t' take me away. I took down six bailiffs, I did, even without me stick, before one o' the wankers cheats and zaps me with one o' them shocky flashlighty things you sees on the telly.

I don' wake up 'til hours later, and bloody hell, I am in a gaol. I'm fookin' twelve years old, you don't put a fookin' twelve-year-old in a fookin' gaol! An' the matron, she weren't no bloody use for anythin' 'cept tellin' me to pipe down an' be patient.

I got me one phone call -- I seen that on the telly, I did, and I yelled right loud until they gave it to me -- an' used it to call the school and tell the Headmistress what's up wi' me hols. Miss Fritton tol' me she'll be sendin' her barrister -- th' one what gets the school an' us girls outta all kinda scrapes -- over on the next plane an' to just sit tight. So I goes back to me "room" an' sits tight.

And what d'ye think happens next? Middle of the night, these bloody fookin' wankers in black armour come breakin' down me door an' tell me I'm some kind o' bloody destined one. Well, I tell'em where they can shove that "destined one" shite, but they ain't takin' "no" for an answer, and bloody hell, I get hit with another o' those flashlighty shocky things.

An' again I wakes up somewhere strange I don' want t' bloody be -- some buildin' made outta iron from the looks o' it. An' I'm barely back on me feet when a couple o' bully boys in that black armour come by an' tell me I got t' talk to someone named Glinda or somethin' like that. Well, I gots me 'ockey stick back, but they're bein' 'alfway polite about it (even if they do 'ave guns and whatnot), so I figured, can't hurt, and follow them out an' about an' up some metal stairs.

This puts me on top o' the big iron buildin'. It's warm out, warmer 'an Paragon City was, and I wonders where the bloody 'ell I am now. So I takes a moment to look about. One side is ocean, but the rest, well, the place is right in the middle o' a neighborhood what looks like fookin' Liverpool on a bad day.

Anyway, me boys in black lead me across the roof to some bint in red with a trash can on her head, standin' on a steel pedestal thing. This, turns out, is Glinda. The boys march off, and I blow kisses after'em just for kicks, then Glinda gets all shirty with me. She tells me I'm in the fookin' Rogue Isles now, workin' for some bunch o' wankers what calls themselves "Arachnos", an' to prove meself worthy o' bein' "rescued" by the bunch o' gits, I have to go kill me some snakes.

Well, I don' bloody work for no one that I don' choose to, and I tells Glinda the Red this. Then I says, "I'm headin' back to bloody England because no one asked me if I wanted to be killin' snakes when I coulda been smokin' fags and playin' hockey." An' I turn around an' walk off.

Then, bloody hell! Some wanker shoots me in th' back with one o' them shocky things again!

So's when I wakes up again, I'm still in Iron House, only now a couple o' the bully boys is holdin' me down while some berk in grey with a fishbowl on 'is head lays down the law. Long and short, 'ceptin' for quick runs to Paragon to fook things up there -- an' them only with a fookin' babysitter from bloody Arachnos to make sure I don't scarper -- I'm stuck here. An' if I wants food to eat regular-like and a place to sleep what ain't got no holes in the fookin' roof, I gotta play by their rules.

By order of his Uglitude, Lord High Muckety-Muck Recluse, what rules all these here islands an' anythin' else 'e imagines 'e does.

An' after Fishbowl and 'is muscle leave, it's pretty obvious to me -- th' only thing keepin' me from gettin' back to dear old St. Trinian's is this Recluse wanker an' his circus o' spider freaks. So I comes up with a plan, I do.

I'm just gonna have to work me way across these fookin' islands to his headquarters, find the bloody git, an' beat him senseless. I can do it, too. 'Cause one thing every Englishman knows is the smaller a St. Trinian's girl is, the more dangerous she is. An' I'm the smallest o' them all.

This is goin' t' be bloody marvelous.