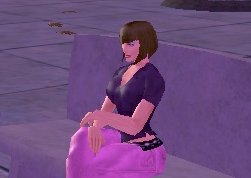 Abigail's power suit uses KF-KL Technology as it was originally designed and built by Nik. She has since modified it after attempting to repair it after her fight with her brother.

The shielding systems in the AB-GL suit were damaged in the fight. At first it simply sparked when she tried to use the shields. She has since modified the damaged shield matrix to perform an entirely different task. Since her shields don't work, she is unable to tune their operations to produce a stealth effect.

Rewiring the damaged shield matrix, Abigail was able to tinker her way into harnessing the power of the suit to channel electrical currents into the repulsor nodes in her gloves. This allows her to arc electrical blasts toward her enemies.

The repulsor nodes in her gloves remain largely unchanged despite the modifications to allow electrical blasts. However, she has been able to direct the repulsor node in such a way as to push a foe back, something her brother has yet to accomplish.