College student Brodie Peterson was a slacker. And not the lovable "Oh, he'll grow out of it and become moderately successful." kind of slacker. Determined to skate by on the bare minimum of effort one can put into life and still "succeed", Brodie spent his nights partying and his days sleeping in, only occasionally showing up for class. The only reason the university endured his less-than-exemplary behavior was because of his two very well-off parents, who generally didn't pay much attention to him in the first place.

Completely plastered one night during a rave on the campus grounds, a few of his "friends" dared Brodie to drink the contents of a beaker in one of the labs the party had spilled into. Not one to back down from a chance to (what he assumed would) impress the ladies, Brodie didn't hesitate. He downed the glowing green liquid. Everything after that was a blur.

Brodie awoke to one of the worst headaches he'd ever experienced. And he'd experienced quite a few. As he groggily swung his legs out of bed, a voice spoke to him. Raspy as sandpaper, it whispered to him. "I am you, you are me. Together we are greater than apart." it said.

He'd been infected. The liquid in the beaker he'd foolishly drank actually contained a symbiotic Devouring Earth spore. It lacked the necessary nutrients to survive on its own and surely would've died had Brodie not come along and "saved" it. So, to ensure it's continued survival, the symbiote made Brodie stronger. And healthier. What followed was a twelve hour, agonizing process in which each little piece of harmful bacteria was purged from Brodie's body. His cells were enhanced, his muscles were strengthened, his skin made tougher. All in all, it was a pretty good deal. It was everything else that came afterwards that sucked.

It turned out his friends ratted him out as the one who trashed the science lab during the party. And not even his parents' lofty connections could keep him from getting expelled. Disappointed and fed up with their son's antics, they financially cut him off. Unable to afford a place in Steel Canyon, Brodie was forced to move and rent a ratty apartment in Kings Row. But on the upside he has superpowers now. So there's that.

As a means of self-preservation, the Devouring Earth symbiotic spore that bonded with Brodie formed a symbiotic relationship with him, and granted him a variety of different superhuman abilities, including radiation manipulation and absorption, shapeshifting, camouflage, enhanced strength and healing.

The symbiote is capable of absorbing, manipulating, and converting radioactive energy to strength. With a touch (or punch as Brodie prefers), it can induce severe nausea and dizziness in its foes.

Using the symbiote's shape-shifting abilities, Brodie is able to become completely undetectable. He's not bending light around himself, he's simply altering the symbiote's coloration to match its surroundings and blend in, similar to that of a chameleon.

Hardening its form around Brodie's body, the symbiote is able to form an extremely tough and nearly indestructible, carapace-like armor that is strong enough to withstand high-caliber gunfire. The symbiote is also able to shapeshift the carapace to form shapes such as spikes and spines.

When armored by the symbiote, Brodie is granted superhuman level strength. He is able to lift small cars with ease, smash concrete and punch through steel. Even unarmored, Brodie's strength is much higher than that of an ordinary human's. It's currently unknown to him exactly how strong he is, but he continues to experiment to determine his exact level of strength. 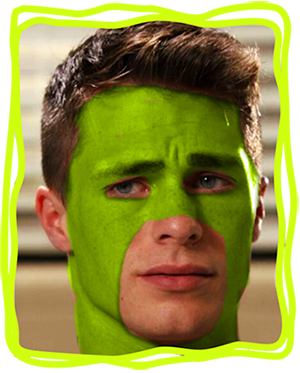 The son of successful corporate parents, who rarely ever made time for their little 'side-project', Brodie craves attention and has spent most of his life learning how to play to an audience. Rarely ever serious and usually the first to crack a joke, Brodie is often the one attempting to relieve tension should the need arise.

Brodie has a soft spot for the ladies and will usually go out of his way to impress any attractive girl he manages to meet.

Desperate to gain back the wealth he'd been so accustomed to living with, he's participated in more than a few get-rich-quick schemes, almost all of which actually end up with him losing money rather than gaining any. To compensate for his lack of funds, Brodie frequently empties the pockets of the criminals he defeats, arguing that "they're not going to need it where they're going."

Only recently has he learned to take responsibility for his actions and accepted the fact that his own ignorance has led him down the path he walks now. A little more selfless than he was when he started out, Brodie still possesses the superhuman power to be a dick despite saving lives.

In his short tenure as a superhero, Brodie has already managed to amass an impressive number of enemies within the super-criminal community.

Herr Silverback and his Chimpanzerfaust Troops

Reinhard Schmultz was a former German World War II scientist, tasked by Hitler to discover a way to create super soldiers for The Fuhrer's army. Unfortunately, Schmultz was killed before he had any noteworthy discoveries. But a rogue faction of the Nazi agenda, well versed in the arcane, removed Schmultz brain, inserted it into a comatose man's body, and brought him back to life, Schmultz resumed his experiments. After a breakthrough test on apes, Schmultz had his team once more transfer his brain into the most powerful gorilla he could find. Repeating the process on many of his (mostly unwilling) followers, Schmultz amassed an army of mind-controlled, monkey henchman. However, Brodie defeated the nefarious Schmultz during one of his earliest plots - liberating the entire galleria of apes within the Paragon City Zoo.

A dwarven demolitions expert with a severe Napoleon Complex and a hyper-jingoistic mentality, Bernard Short was made fun of by his fellow military-bound, high school classmates after he was turned away from serving due to his handicap. Determined to defeat our country's "enemies" hiding within our own borders, Short became a domestic terrorist in an attempt to convince the government to wake up and acknowledge his claims. Really, he just wants to be noticed.

An orphan who's parents were killed in a car accident on Christmas Eve, Emmett Kraminski grew up as an angry youth in Berlin, Germany. Emmett eventually relocated to America after being accepted into MIT, going on the graduate and start his own business. After discovering his business partners had been committing corporate crimes, Emmett's company was driven bankrupt... on Christmas Day. Enraged, Emmett adopted the Tannenbomb persona, developed hand grenade-like explosive Jingle Bells and set out to spread "Christmas cheer" to his enemies and business rivals. Brodie inevitably fought and defeated him, sending him to prison before he could gain revenge on his partners.

Ghostbird: The enigmatic and mysterious vigilante known as Ghostbird is probably Brodie's closest ally, even though he barely knows anything about him. Specifically, his identity. But he's not rich and he doesn't like caves, so he can't be Batman.

Spacejam: Space girls are hard. Noni’nari Inouim. Weird. Alluring. Cute. Unpredictable. Brodie has yet to find the right words to accurately describe the intergalactic rockstar, but when she's around, he finds he can't look away. She's very touchy-feely and has little regard for personal space. Brodie doesn't mind. But he pretends he does.