Adelkaiser is the name of a hero hailing from the dimension of Upsilon Beta 9-6. While outdoors, a foreign object from space entered Earth's atmosphere and ... crushed him. Where he should have been rendered a fine red paste, he found himself feeling better than ever! Clad in a strange blue and gold armor and his natural abilities enhanced to tremendous new highs, he dubbed himself Adelkaiser and, after a brief power-trip, was enrolled in the Powers Division. Following a series of events he has found himself on Primal Earth tearing down the regime he once looked up to for the sake of all mankind. With the war drawing to a close, he looks on towards future threats.

Through concentration, Len can physically manifest all of his inner strength and unleash it to the fullest extent by transforming into Adelkaiser.

As a result of his alteration, Len is physically capable of outperforming most other peak humans across the board. The only limit to his talents is his body, which cannot support such feats for an extended period of time. As Adelkaiser, his natural abilities are improved further, allowing him to handle a broad spectrum of super powered threats.

Using archaic methods, Len can manipulate his own life force to a small degree. The most common application is channeling chi into his limbs to enhance his strikes against objects of tremendous durability.

A grand name for something far more basic, 'Space Karate' is simple fisticuffs enhanced by the strength, speed, and agility Adelkaiser possesses. Len has made very little effort to expand or learn from others in order to improve his methods, feeling that 'Space Karate', in it's current state, is more than sufficient.

Ignoring the fact that Len was born in a world where the most likely thing to kill you were the trees, he lived a fairly unremarkable life. His family moved from place to place before eventually settling in the Imperial City. And so time marched on in the 'utopia' that was the Praetorian empire. His oldest sister was enrolled into the Powers Division shortly after her mutant abilities manifested, while his brother spent his nights at various nightclubs. Len, himself, however, simply grew agitated at the mundanity of it all. With every passing day, he began to feel more and more as if he were trapped. In order to preoccupy himself, he asked his sister to teach him how to protect himself in secret, 'just in case'.

One night, staring out towards the dense foliage that surrounded the city, Len spied a shooting star. Closing his eyes, he thought over his life, pondering on what he could wish for. Realizing there was really nothing he COULD ask for, aside for maybe a giant weed-whacker, he opened his eyes in frustration. It was at this point that he realized two things. The 'shooting star' was not a star, and it was rapidly increasing in size. By the time he realized that it was not growing, but flying towards him, it was too late. The object collided with tremendous force, knocking Len into darkness.

Stirring a few hours later, and feeling perfectly fine, he assumed he had been dreaming.. Until he hopped over a small hill when he started on his way back home, crushed a bench while landing, and then saw his armored lower body. He quickly returned to where he had been struck, to find no sign of whatever it was that hit him. Deducing he had inexplicably been granted super-powers, Len took it upon himself to do what any young adult would when granted a tremendous abilities..!

Len began his crusade as an ally of justice by throwing the sedan of the woman who rejected him two weeks prior into the ocean, then propelling his unintelligible, creepy mohawked neighbor across the street and through his apartment's door with the assistance of his fists. Before long, he found himself in a running battle across the Imperial City with elements of the PPD and a single Powers Division member. With his augmented talents, he was able to disable a dozen of his pursuers before suddenly returning to normal mid-sprint and colliding with a wall. He was quickly subdued and taken into custody. Officially, Len was subjected to the re-socialization and re-education regimens that most law breakers undergo, however.. 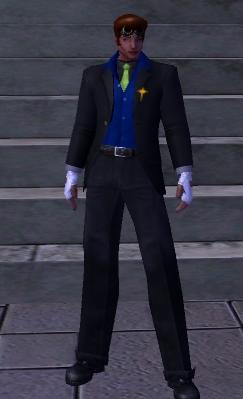 Compounding his troubles, Len was unable to recreate the first incident where he transformed. Instead, they seemed to come and go on a whim, whenever he encountered another super-powered individual. After several failed efforts to control it, he donned a simple martial arts gi, and called himself 'Adel'. In a short time, the skepticism of the public and his fellow members in the Division vanished as he got to work defeating and capturing the enemies of Praetoria. His associates instilled a very 'traditional' heroic MO upon the man, which he did his best to follow. Over time he came to enjoy his new 'career' and the perks it brought about, eventually settling into a very comfortable lifestyle. With the discovery of 'Statesman's World', better known as Primal Earth, his workload doubled. Between fighting off the invaders known as 'Arachnos' and 'Longbow', Len learned as much as he could about this new earth, with all the information he had access to painting the picture of a backwards, crime-filled planet - a stark contrast to the utopia he lived in. It came as no surprise to him and many others when they began to hear talks of an invasion to save the Primals from the decadence of their world.

Over the World Wall