I love unpowered characters. After flailing about with different flavors of Martial Arts scrappers (Batman-inspired, Spidey-inspired...even Spy Smasher-inspired), I happened upon an idea I liked: what if James Bond and Indiana Jones had a baby? What kind of life would that child lead?

So that's Adventure Girl's "power": growing up, she led a life of near-constant peril. The only way she could survive was to learn how to survive every conceivable form of peril. From being attacked by bears to getting caught in eartquakes, Adventure Girl has done it all and survived. So far.

Living a life of near-constant peril has made Adventure Girl a bit...cavalier. Her devil-may-care attitude comes across as reckless and fatalistic, though nothing could be further from the truth -- beneath the grin and jibes, she is quite meticulous. Any other attitude would probably get her killed.

Adventure Girl has an extensive knowledge of various martial arts, including: Karate, Aikido, Judo, Muay Thai, Krav Maga, Sambo, Savate, Kung Fu, Tai Chi, and others. Some of her martial arts training was detailed in Adventure Girl/Do I Have To.

Adventure Girl possesses an encyclopedic and instantaneous knowledge of responses to dangerous situations. From animal attacks to bombs to car chases, she is never caught flat-footed. This knowledge has allowed her to walk away from incidents that would have killed a normal person many times over.

Adventure Girl is a normal human female. It is conceivable, though unlikely, that she could make a mistake, or be confronted with a threat that she can not counter. Should this happen, she would probably die. 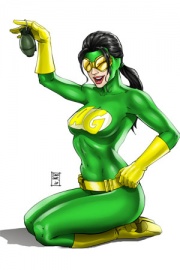 Fiona Danger-Hunter is the daughter of Madeline Danger and Jack Hunter. Madeline Danger is a secret agent in the service of the international anti-terror organization known as "S.I.G.H.T.". In espionage circles, she is often referred to as "the most dangerous woman in the world", thought that claim may be slightly overblown. Her dossier is extensive (see Appendix A, attached), but highlights include: 1.) Operation Daybreaker, in which she stopped agents of S.T.A.R.E. from extinguishing the sun. 2.) Operation Tread Lightly, in which she went undercover as a Council soldier to extract scientist Vladimir Stut. 3.) Operation Come in from the Cold, which ended in a daring snowmobile chase across the north pole to retrieve a missing biological weapon. And so on.

Jack Hunter is a museum curator, archaeologist, and explorer. He is credited with discovering the Mugabu tribesmen of Senegal, and the lost tomb of Tectamatahuatl in Mexico, in addition to numerous other finds (for a complete list of Jack Hunter's adventures, see Appendix B). Our contacts in other organizations indicate that he is exceedingly difficult to kill, possessing indescribable luck and an aptitude with machetes, boomerangs, and his bare hands. He is said to have escaped quicksand, avalanches, a yeti attack, wolves, piranha, boa constrictors, dive-bombing, depth-charging, several car collisions and explosions, and is said to have walked away from being run over by a train. Nevertheless, examination of his genetic material indicates to super-powered potential or meta-genes.

Madeline Danger and Jack Hunter were married in 1978, at an elaborate ceremony that was interrupted when three S.T.A.R.E. helicopters fired heat-seeking rockets at the proceeding (the helicopters were destroyed by the pair, and the S.T.A.R.E. operation from which they were dispatched was disabled). After four years of near-constant adventure, Danger and Hunter were blessed with the arrival of baby Fiona. Fiona's birth was interrupted when one of the nurses, a disguised member of the Rama-Shabba cult, attempted to steal the baby. Eyewitness reports, considered unreliable, indicate that the baby somehow affected her own escape. However, authorities credit the child's father with the rescue (Jack Hunter was dragged three miles behind a speeding jeep while cradling baby Fiona in his arms, as detailed in Adventure Girl/Birthday).

At age 21, Fiona Danger-Hunter disappeared for four years. She was reported to have remained in close contact with her parents, and S.T.A.R.E. records place her at various locations around the globe. She is reported to have spent substantial amounts of time in Okinawa, Paris, and Thailand.

On January 15th, 2007, S.I.G.H.T. filed a report indicating the Madeline Danger had missed a required check-in and was presumed missing. On January 16th, Jack Hunter was absent without notice from his scheduled class at Paragon City University. Neither Danger nor Hunter has been seen since. Fiona Danger-Hunter appeared in Paragon City on January 20th, and made contact with S.I.G.H.T. operatives, before flying to Iceland for a brief meeting with her father's trusted compatriot Ali Fajja Achmed "Big Ali" al Jamal. She returned to Paragon City, filed for a Hero license, and began working her way through low level street crime, investigating seemingly random crimes and tackling cases that seem to have no relation to her parents' disappearance. She filed for a hero license under the name "Adventure Girl".

Adventure Girl has no super-powers. Her main assets are an extensive knowledge of numerous martial arts, as well as excellent physical and mental conditioning. She has an encyclopedic knowledge of dangerous situations and the proper reaction to each -- she has survived animal attacks, falls, explosions, car chases, poisons, traps, bonds, bombs, natural disasters, airplane crashes, and psychic assaults. We have yet to record an incident in which she was captured unprepared. She also possesses extensive knowledge of first aid and wilderness survival.

In addition, Adventure Girl has limited access to equipment from her mother's arsenal of "spy gadgets", including multi-vision goggles, rocket packs, emergency teleporters, and stun weapons. She is deadly with throwing knives and other small weapons.