Jump to: navigation, search
"Technology can do little for people who have nothing to say." - Eric Auchard

There once lived a brilliant and noble inventor, Walter Kingsley, who was kidnapped by Crey for his revolutionary skill. With threats issued against him, and his wife and son, Walter was forced to develop a terrible weapon. A powersuit to vastly outperform all of Crey's current models. He did his job all too well. Donning the newly dubbed Aegis Suit he blasted his way free of his captors. However, try as he might, Walter couldn't flee Crey forever. Agents came to his place of residence and brutally murdered him. Walter bravely sacrificed himself that night so his wife and son might escape. Exactly one year later Walter's son Theodore found his father's legacy, the Aegis Suit, and swore an oath in his Walter Kingsley's name. Now known as the hero Aegis Engine, Theodore fights so that no one in Paragon City is ever subjugated against their will.

For Theodore Kingsley the path to becoming a hero was a long and twisted one. His loving father Walter Kingsley, an unparalleled inventor, engineer, and student of science wove technology into nearly every facet of his life. With wife Juliet Kingsley proud and son Theodore admiring of all his work Walter's life was one of august achievements. However too bright a shine draws eyes of envy. The infamous Crey Corporation extended many offers to Walter in earnest. Time and again he refused them. If promise of riches and comforts wouldn't coax him what would? The Countess herself demanded Walter's expertise "You've tried the carrot. Now use the stick." Agents payed one last visit to the Kingsley home with a simple proposition. Walter's skills would be Crey's or his family would suffer. He left without protest.

Years past as Walter was forced to produce terrible weapons that would lead to Crey's ascent as a leading merchant of death in all forms. Contact with his family, who lived in constant fear for Walter, was his only reward for continued obedience. But over the years Walter secretly plotted an escape. His greatest project would also be the means of his escape. His keepers had long since let their guards down and payed little heed to Walter handling potentially dangerous or otherwise precious materials to Crey. The Aegis Suit he called it. The culmination of all his work with Crey. His guards, unaware of the suits full functionality and extensive capabilities, Walter felt it was high time to give a demonstration.

The original Aegis in combat with a Protector
Donning the Aegis Suit Walter became an unstoppable super powered force who smashed his way free of his captors. In a brilliant display of might the Crey facility where he was being held was reduced to a ruin.

Walter reunited with his family. He abruptly ended his joyful reunion with his loved ones, knowing Crey would undoubtedly pursue him with burning rage for their stolen property. Paragon City would prove an adequate place to hide for the time being. But nowhere was safe from the power arrayed again them. Agents eventually located the Kingsleys and mobilized everything they could intent on bloody revenge and reclaiming what was theirs. Agents, Crey Tanks, and specialized crisis units of all sorts converged on the Kingsley's unassuming, out-of-the-way apartment in the dead of night. Walter emerged with with the Aegis Suit to confront the invaders. He fought ferociously through waves and waves of Crey's goons until succumbing to their overwhelming numbers. Collapsed from severely injury and exhaustion, surrounded by power armor clad fighters a single neatly dressed Crey agent emerged from the crowd wielding a pistol. In his last thoughts Walter wished his family well. Then deafening silence was broken by a single gunshot echoing through the night. The hundreds of men toting power armor and advanced weapons, however, had failed miserably in their task.

Two key witnesses Juliet, the target's wife, and Theodore his son, had escaped in the chaos. Not only that but the Aegis Suit was missing several key irreplaceable components. It was essentially a worthless pile of scrap to Crey. Walter, in death, denied them their victory and bravely sacrificed himself so his loved ones might escape. His family grieved for him in their own way. But something had changed in Theodore. What did his father die for? Why were they the target of attacks? This was wrong. Injustice. He would have to find a way to make things right. This would lead him to clues cleverly left behind by his father which paved the way to recovering the figurative heart and soul of the Aegis Suit.

Yeah he can fly

Yeah I'm not done big whoop wanna fight about it 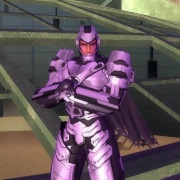 Theodore in his Mark II Suit ready for combat