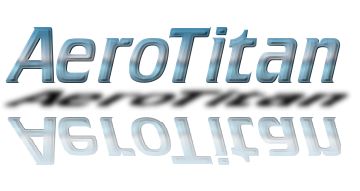 Bruno Harrison, AKA: AeroTitan; who is he? Well he can be best described as the gentle giant. Always ready to do some hard work, AeroTitan is the first into a fight and the last one out. Bruno also values loyalty and seeks so in his friends and affiliations. You can never go wrong with AeroTitan on your team!

Chapter I: A father's dream

Bruno Harrison was born into a powerhouse family. His Father had started a world renown gym and his mother was a somewhat lowly regarded Hero. From his parents, Bruno grew up with a passion for pumping iron as well as inheriting his mother's ability to repel himself from the ground beneath him, granting him the ability to fly. At the age of 16, Bruno stood tall over everyone else and had natural super strength. Eating right and staying in shape were his pastimes. When Bruno turned 18 he was invited into the Worlds Strongest Man Competition. Being that this was Bruno's father's dream, he wanted his son to win so badly he offered his son some genetically modified crops made with "unethical" substances. Being unaware of what his father was feeding him, Bruno ate and ate as he was told. However, Bruno's father had been given a liquid that he was told was made from the strongest protein in the world. Bruno drank the substance and just days before the competition his skin...started to fall off. It begin on morning as what seemed to be a severe case of dry skin then it began to crack and eventually peel away, revealing a metallic underlining.

Frightened that he had taken it too far, Bruno's father became disgusted with himself, he closed his gym and took off. Bruno became depressed, since he was kicked out of the competition for taking "unethical" products. Bruno's mother AeroLass still stayed by his side and showed Bruno the silver living (no pun intended) 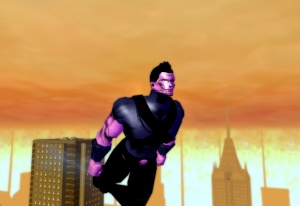 AeroTitan
Bruno lost it all; his father, job, fiancee, but NOT his passion for strength. Waking up one morning, Bruno went out for his morning jog. He often bundled up in clothing to prevent the stares from people wondering what this metallic building-size guy was doing, and if he'd hurt them. As he was going under the tunnel from Steel Canyon to Atlas Park, Bruno could not help but notice a young teenager jogging just a few hundred feet in front of him. He admired the teen's aspiration for fitness and thought of his younger years. Suddenly, a truck began to swerve from the oncoming traffic and was sliding straight towards the young teen! Bruno, being the courageous man that he is, repelled himself against a pillar and shot straight for the teen. Grabbing the teen in, Bruno turned his back against the truck which smashed all around him. After all the smoke and debris had cleared, Bruno was left unscathed and the boy had not even a single scratch on him. The people got out of their cars and stood their shocked, then a slow clap started and grew into a thunderous roar or cheer that echoed through the tunnel. The truck driver emerged, with some slight bangs on his head asking if he was OK. Bruno smiled and replied, "I'm fine and so is he" pointing to the teen that he had released from his protective grip.

Immediately a camera crew surrounded him asking for his comments and all Bruno could say was, "Make sure to eat your vegetables!"

A few weeks had passed since Bruno's heroic act in the Tunnel and his mother was overbearing him with praise. They decided to celebrate by heading out to "EL SUPER MEXICANO!". After sitting down and ordering, Bruno found that he could not stomach the food, and suddenly threw himself on the floor in pain. His mother immediately knew what was wrong, he was feeling the repercussions of being made of Titanium. He was rushed to the hospital and the Doctors guessed that he might live if he drank whatever it is that he drank that made him this way. AeroLass searched and found Bruno's Father in a beat down apartment in Boomtown. With his head held low not even daring to look at AeroLass, he told her where he bought the liquid titanium.

Rushing to the hospital, Bruno chugged the concoction of liquid titanium and immediately felt better and stronger! It was determined that he would have to carry a "medicine belt" that would contain small samples of liquid titanium for him to use throughout the day. Without this....who knows what would happen to our gentle giant friend!

Because of AeroTitan’s superb performance in the field, the PPD decided to throw Aero into Peregrine Island to see how he would do. Well as usual, AeroTitan flourished with a great team and lead them into another great victory over crime! But towards the end of the day AeroTitan checked his belt for more of the liquid titanium that kept him healthy and realized he had consumed his entire stock! Worried about his own personal health he immediately called his mother and she told him that she could not get anymore! The supplier told he, he did not make it anymore and would not make it anymore.

Feeling more and more weak and agonizing pain in his body from the withdrawal of his concoction, AeroTitan searched out Revamp and cried out for help. Meeting at the base, Revamp watched as AeroTitan fell on the floor, knocking over tables and chairs, suddenly Aero passed out, and his metallic skin shed off into….regular HUMAN SKIN! After regaining consciousness, Aero looked at Revamp who had the most dumbstruck face ever on.

Revamp said, “Dude you’re..human!” Then Revamp asked him if he still had his powers, but after Aero failed at lifting at some over sized furniture, horror and depression immediately befell on Aero. Aero discovered that the former supplier of his liquid titanium was Benjamin Blitz. So Revamp and Aero decided to pay him a visit….

Blitz had left a message for Revamp to pick up his dry cleaning so they headed out to there but were ambushed by Arachnos! AeroTitan fell unconscious and Revamp was taken captive! Extraordinary managed to save Revamp and they all met back at the base with Space Age to talk about what they would do next. Well, seeing as Blitz was Extra’s relative in some way they decided to have Revamp shapeshift into Extra (for reasons unknown) and grab some new Impervium Liquid since Titanium was no longer in production at the factory Blitz owned. Revamp returned quickly and AeroTitan guzzled it down desperate to gain his powers back….

Chapter V: Bigger and Badder than ever!

The liquid impervium took to AeroTitan amazingly and he shown brighter, hit harder, and kicked more arse then ever before! Feeling rejuvenated and revitalized, Revamp brought back to AeroTitan’s attention that Blitz had indeed tried to kill them. There was a lot that needed solving and they were going to find out! 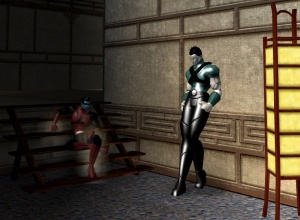