Mercenary. Soldier of fortune. Freelance agent. All of these describe Agent Jonathan Solano, a well-known and esteemed "contract worker" in the Isles. If there's been a big event, it's likely Solano was involved. If an unstable political figure suddenly turns up missing, only to return a week later slightly shaken, it's perfectly possible Solano kidnapped him. A jack-of-all-trades, Solano cares about only two things: the completion of his job, and his subsequent payment.

Jonathan Solano is a freelance mercenary, originally affiliated with Malta. Born and raised in Paragon City, he sought entry into Vanguard, but was denied for a brief history of mental problems, and a suspected growth disorder - both of which turned out to be attributed to an unrecorded genetic modification and enhancement. Though this was almost unheard of, he was scanned and let go after being deemed as a "non-threat" by Freedom Corps officials. This did not stop Solano from trying to get into the action though, and he was eventually approached by the Malta Group. He accepted this offer, he rose in the ranks quickly, soon becoming a well-respected operative in his cell.

The one problem with working with Malta in Paragon City is that sooner or later, your cell is going to be discovered by a bunch of tight-clad punks. This happened to Jonathan Solano all too soon. As the heroes stormed his base of operations, destroying everything in sight, he fled, destroying all the records of his involvement in the Malta Group and 'liberating' as much equipment as he could carry. He was captured and placed into the Zig, and his equipment impounded in the facility.

Luckily for him, Lord Recluse decided to crack open the prison shortly after his incarceration. With the guards subdued, a street war between Arachnos and Longbow raging outside, and a prison riot occurring, Solano decided to get the hell out of dodge before the heroes showed up. A brief reunion with his equipment saw him fleeing the prison and heading for the first Flier onto the Isles.

There he met with Kalinda, and though suspicious of his involvement in Project: Destiny, he shrugged it off, deciding to forge his own path through the Isles the only way he knew how - with guns. Lots of guns.

There is little recent history of note at this time. Jonathan Solano has performed independent mercenary contracts and is eking out a living in the Isles slowly but steadily.

Jonathan Solano was genetically engineered by the 5th Column in an attempt to create the perfect Aryan human. His birth records were falsified, and he was planned to be drafted into the Column along with several others of his kind to be their ultimate supersoldiers, even stronger than the Ubermenschen. When the Council destroyed the 5th Column, he was all but forgotten, and was never initiated into the 5th Column. His 'Aryan' mindset and appearance still remains, leaving him mildly prejudiced against many non-humans and 'undesirables', such as vampires, catgirls, and werewolves. Since it is not known even to him that this is his true origin, this prejudice was seen as a mental issue by Vanguard rather than an engineered behavior. 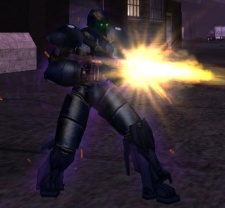 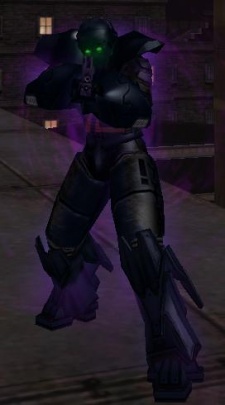 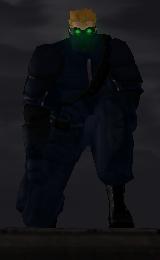 Most, if not all, of Solano's equipment is highly customized for long-term deployment and solo assaults. Rarely does he group with another mercenary or a team, and his involvement with mercenary groups and corporations are usually short-lived. Thus, he must be self-sufficient, and this means carrying a lot of equipment on him.

His primary and most valuable tool is his weapon. The weapon is a completely custom build, modified and outfitted from his Malta service rifle. The rifle itself is not an assault rifle, but an automatic rifle, as it fires a full-powered cartridge. It is operated by direct gas impingement, with a rotating-bolt locking mechanism. It is chambered in a derivative of .338 Lapua, a cartridge he calls '.338 Automatic'. The casing has been thickened to provide support for the cartridge when being fired in a fully-automatic firearm, as well as reloading spent cartridges, at the expense of muzzle velocity. This drawback is mitigated by the sheer amount of bullets Solano is capable of placing on a target.

The rifle uses 45-round box magazines, but can also be fitted with 100 and 200-round drum magazines for sustained fire. The spent cartridges are ejected through an ejection port with a deflector similar to the AR-15s, preventing hot brass from simply flying everywhere. Powerful electronics in the rifle feed information directly to his hardsuit's helmet-mounted display or tactical goggles, allowing him to aim the firearm with limited sighting via infrared laser mounted aside the muzzle.

A breech-operated, single-shot twelve gauge shotgun is built into the rifle as well. This weapon is loaded via a breech that opens by depressing buttons on either side of the forward grip, pulling it out in a similar method as one would use to pump an air-powered rifle. The shell is inserted into the breech, then the grip is pushed back into the rifle, loading the shell into the firearm itself. This mechanism greatly expands the versatility of the weapon, as the shell can be loaded with many different munitions, including, but not limited to, incendiary, high explosive, rifled slug, buckshot, less-lethal, and even some experimental energy-based shells.

When a target is particularly dangerous, or there are environmental hazards, or simply when he chooses to wear it, Solano makes full use of his Full-Body Hazardous Environment Armoured Hardsuit, or simply 'hardsuit'. This fully powered armour enhances his mobility, sheer strength, and accuracy through micro servomotors, hydraulic exoskeletons, neural interfacing with his brain stem, and even magnetic mechanisms in his boots for operating on the outside of aircraft or other fast-moving metal entities. Originally developed by Malta as a defense against super-powered threats, it has been modified and customized by Solano, turning it from a simple unpowered prototype to a lethal death-dealing machine and defensive suit. The electronics in his rifle sync and 'work with' the electronics in his hardsuit, giving him a real-time targeting crosshair and ammunition counter.

His hardsuit also includes a full breathing apparatus, and is pressurized for underwater or high-atmosphere combat. The breathing apparatus filters oxygen from the outside, combining it with carbon dioxide exhaled and captured by internal tanks, allowing him to breathe easily as long as there is some oxygen present in liquid or gaseous form outside of his body. If the oxygen is retrieved from water, experimental "molecule snappers" separate the hydrogen atoms from the oxygen, using the hydrogen itself as fuel for the process. This breathing apparatus gives Solano his almost trademark *kssscht!* breathing sound.

The 'power' in his armour comes from a kinetic barrier system developed by Black Scorpion's technicians and presented to Solano as payment for his mercenary work. The operation of this kinetic barrier, or 'shield', is simple - it deflects any material object traveling over a certain velocity. This way, Solano can be protected from projectile fire and fast-moving objects but can pick up his rifle without it flying away from his hand. It also protects him from directed energy attacks, as they are absorbed by the barrier, transformed into low-power ultraviolet radiation, which can be seen emanating from the field itself in the form of deep violet light. This shield does not deflect the elements, however, and so he is susceptible to heat, cold, toxic, psionics, and negative energy.

Solano's tactical gear, also known as a 'tacsuit', is fairly simple. Soft body armour with Kevlar inserts and ceramic-impervium trauma plates protect the torso and upper arms, leaving the limbs bare. The face is masked and concealed to prevent identification of the operative. Standard navy fatigues and combat boots are used. This gear closely resembles what Solano used in his Malta prime, and is generally used for infiltration missions where superior firepower is either unwise or unnecessary.

Solano has access to a Nullifer Mace given to him by Black Scorpion as a reward for mercenary work. He is able to immobilize enemies using its web grenades, but it is incapable of firing directed energy blasts. In the heat of battle, though, it is capable of serving as a bludgeoning instrument, giving Solano some melee capability.

More vulgarly known as 'traps', Solano has the ability to requisition a seemingly endless supply of traps, devices, and other weaponry. Ranging from tripmines, to force field generators, to caltrops, to even acid mortars, he can use these in a support function, either defending himself and his teammates, or disabling or hindering his enemies.