Lizzy Vela is one of the brightest minds that the Freedom Corps has to offer. She started he work with Longbow as a medic for hurt agents and heroes on the battlefield against villains of Paragon City. With this increase in knowledge of medical ways, her potential was shown to the superiors of the Freedom Corps. As such, they entrusted her with several technologies that only Longbow has access to, Psionic Enhancers. This device was an original project that developers of DATA had been looking into for quite some time based off information they had received about the clockwork king and his psionic connections to machinery. From this experimenting they developed the Psionic Enhancers, PE, which would be installed at the base of the skull and spine in order to help amplify people's psionic capabilities. Lizzy, who wanted to get more involved in the fight against heavy super villain groups such as the Arachnos, volunteered for the PE device to be installed as a human guinea pig for the ability to help fight crime. The increase in psionic brainwaves had an odd effect on Lizzy as she began to develop a device using her medical knowledge from helping the agents of the Freedom Corps and formed a device known as Bioregenative Agent which allows her to administer great healing effects in the matter of moments. With the success of the Psionic Enhancer and Lizzy's development of the Bioregeative Agent, the Freedom Corps felt as if she had made her way up in the ranks and as such gave her a special job as the Longbow Liaison for an upstart super group lead by Universal-Guardian know as the Galactic Shield. Most of her days involve work with either the daily maintenance of the Freedom Corps, helping the Galactic Shield in getting more spotlight within the many fine Super Groups of Paragon City, or helping heroes not associated with either group in order to maintain the highest level of laws within such a chaotic city as Paragon City.

The Psionic Enhancer, PE, was formed by DATA in order to create a closer connection psionically with machinery. It is planted at the bottom of the skull where the skull and spine meet. This version of the PE actually amplifies the psionic power anyone has and as such allows nearly anyone with psychic potential to be able to take and use psionic powers to a much greater degree.

The device itself allowed Lizzy to create one of the greatest health compound known to man, which she coined as Bioregenative Agent. With the worry about what this device could do to a normal human teenage like Lizzy, DATA attempted a dash plan in order to remove it from her. She refused due to knowing that duplicating the same item has the chance of it falling into worse hands. After disappearing for several months and staying ahead of their movements by using her powers acquired from the PE to scramble any thoughts that she were there or a small amount of memory wipe to take away any knowledge of her existence to them before escaping.

With the aid from the Psionic Enhancer, Lizzy was able to create a strong health compound that she referred as Bioregenative Agent in her research notes. The agent has a mixture of different elements within it to which the agent itself is a slightly glowing green goo that sticks onto a person's skin and that allows the skin to absorb the nutrient that the goo possesses to go directly into the skin and into the bloodstream. The properties of the goo do not necessarily kick in all at once; however, the goo has been known to help swiftly mind cuts and bruises, give great vitality and strength, allow the mind to concentrate instead of getting distracted, and actually give the subject acute senses.

The breakthrough in which Lizzy had made in the medical field was amazing; however, to keep the greedy hands of drug companies from abusing it or having her invention reach criminals or other people who would abuse the agent for their own uses, she declined allowing anyone but herself being able to have the agent which she usually has stored in her gloves of her uniforms in order to make sure no one else touches the goo as it would lose its effectiveness at the human touch. When she's not in her uniform, she usually cares a vial or two somewhere on her to ensure that if the time arrives that someone is in dire need of her help, she can heal them on the spot. 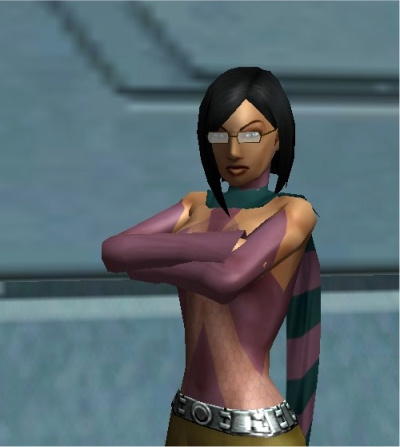