Like her twin sister Hunter, Alexei is a fun-loving individual who is always looking for a good time. Despite her small stature she is particularly interested in full-contact sports, and has earned belts in several forms of martial arts.

Many people believe her to be anti-social, as she is often shy and quiet when not with her sister. However, in the right crowd she is able to open up and express enthusiasm and excitement that is almost infectious in its nature.

Alexei can usually be found wearing a variant of her Cygnian Marines uniform, whether she is actively on a mission or not. Like her sister, she is rarely without her goggles, although her reasons are likely more related to style than function.

In addition she usually wears the Electrostatic gauntlets typical of her Powersuits when working around the Rho, for both the added strength and dexterity they provide.

Though born into what was essentially military royalty, Alexei opted to begin her military career as all others—through entering basic training. It is there that she, like her other relatives, developed her natural talent for marksmanship, becoming proficient with all firearms.

Following in her sister's footsteps, Alexei chose to volunteer for the Powered Armor Battalion (PAB) instead of continuing her tour with the Cygnian Marines. It was there that she first became introduced to the Powersuits, piloted robots designed for a number of purposes including destroying Arcturian tanks and spearheading Cygnian assaults.

Alexei, like her sister before her, took to her new role like a proverbial fish to water, and within a short period of time was awarded several medals for bravery and distinguished service. She is still enamored with the Powersuits to this day, and has since modified her original into three separate models, each with its own function and abilities.

While Alexei, like Hunter, has no superpowers to speak of, she has been trained as a Cygnian Marine. As such, she is physically and mentally fit and proficient in a number of different weapons systems. However, her greatest strength comes from her various Powersuits, each designed for a specific purpose. 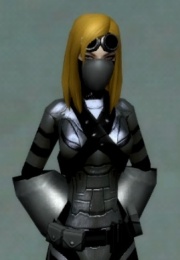 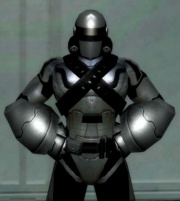 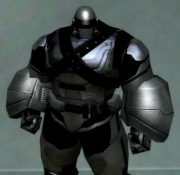 Although she is a Cygnian Marine, and thus physically and mentally fit, Alexei, like Hunter, is as vulnerable as any human being outside of her Powersuits.

In addition, during long missions her muscles may show symptoms of atrophy, causing alternating localized pain and numbness to her limbs. Because of this, she often has to spend time re-strengthening her body between missions using physical therapy and exercise equipment provided by the Rho's medical personnel.

-All of her Powersuits can be operated remotely via laptop, which she carries with her in a backpack

-It takes an average of 5-10 minutes for her to "suit up," depending on which model is needed