Mal is an energetic, rambunctious, and loud person. She loves to always be doing something, and that something better be fun. She has a constant, goofy grin on her face and shakes off her troubles and worries before they weigh her down. She loves to talk, and get in the middle of people's conversations. By many, she's seen as annoying and obnoxious, and those people have some good points. She's also fairly overconfident in her own abilities, and seems to think she's invincible. It will take a lot of hard knocks to work that out of her. Seemingly hand-in-hand with her overconfidence, she has a tendency to start and do things without thinking them through, which has gotten her into trouble on several occasions. Mal is also an unabashed sci-fi and comics nerd who loves to fill her head with useless trivia about both.

Mal doesn't allow herself to be pushed around, and especially doesn't let people do it to her friends. When threatened, she'll often plant herself like a tree and refuse to give up. She also has a bit of a temper when it comes to threats, and when the temper comes out so does the swearing she usually tries to keep to a minimum. When it comes to her friends there's no lengths she won't go to in order to help them, even if they're begging her to leave it alone.

Hank Watson isn't the most famous inventor in the world, but he is a smart man, and his daughter, Mallorie, was getting tired of living in his shadow, especially with his expectations for her her future. The man wanted his daughter to follow in his footsteps and become an inventor like himself, oblivious to, or simply ignoring the fact, that she was not nearly as smart as him, nor did she have the will to study very hard. Mallorie didn't know what she wanted to do with her life, but she was sure it wasn't what her dad wanted.

It was the day her report cards came in that her future was decided. With her father scolding her for her average grades, Mal decided she'd had enough and formed a plan every teenager has thought of at some point: She was going to run away. She decided to prove to her father that she could excel at something other than what he wanted, so that night she snuck into his lab and looked around.

Grabbing a laser rifle and her father's blue prototype chrono-suit, she stuffed them into her backpack and headed up to the garage to grab some transportation: a hoverboard. With an overconfident grin she hopped on and made for the City of Heroes.

"Let's get this show on the road!"

With nothing to her name but her suit, her gun, and her board, Mal camped out in Skyway City as she waited for her hero application to be accepted. She practiced her skills with the gun and the suit on Trolls until she was competent, and then started going for more public stunts. Fame and fortune as a world-renowned hero sounded pretty good to her. When the Shivan meteors destroyed Galaxy City, Mal was one of the many heroes who went in to help, and she assisted in removing Arachnos soldiers from setting up a foothold in Atlas Park when they moved in during the confusion in Galaxy.

In her off-time, and because it was better than hanging out under overpasses and trading insults with Trolls, Mal started visiting Pocket D, where she's starting to make friends. One of these friends, Spiritbound, let Mal stay with her until she was able to find a place of her own. Luckily for Spirit, that didn't take too long. Once Mal's application was accepted and she started receiving a salary for her hero work, she moved into an apartment in Croatoa.

After becoming settled in, Mal went to work forwarding her career as a hero, though she didn't bother hiding her identity behind a mask. While most of her efforts were spent on a more "street-level" cause, such as battling Hellions and Trolls, she was occasionally summoned to fight larger threats such as the Circle of Thorns and Rikti. During these times Mal became a member of Vanguard, though she wasn't often seen helping them in the warzone, preferring to spend her time in the city and preventing things that could turn it into another area like the warzone.

Contacting her father also netted her into a brief bout of trouble, as he informed City Hall that Mallorie's equipment was stolen and pressed charges against her for their theft. It was only thanks to all her good deeds she was able to score some mercy during the brief trial and avoid prison time, though she spent some time on suspension and the city kept her under a more watchful eye afterwards. Meanwhile, someone with a grudge was breaking out of prison... 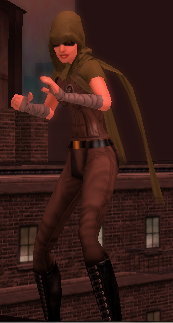 Mal's over-confidence in her safety came at a high price when late one night her apartment was bombed by a thug seeking revenge. The explosion destroyed all of her possessions, including her equipment, and blew the girl out of the third story apartment into the streets of Croatoa. Seriously wounded and near death, she was rescued by Spiritbound. Mal recovered in the hospital until she was able to get back on her feet, then she was back to staying with Spiritbound.

Back to square one, she found herself more determined than ever to prove herself as a hero. Foregoing any gadgets, she decided to start anew, this time keeping her identity a secret to prevent revenge attacks like the one that nearly killed her. With nothing to her name but her fists, she decided to start training in hand-to-hand combat, being mentored by Midnight Mustang, and took on the alias of Alley Striker. Spiritbound also taught Mal the art of swordplay, along with some light magics such as wards and cantrips.

In addition to fighting and magic, Mal began teaching herself to be an amateur detective, and using the fake name of "Karen Holmes" when following a case. How good she is at sleuthing remains to be seen. During this time, Mal was one of the first two people, along with Hurt Kid, recruited to join Midnight Mustang's new vigilante group known as Ferocious Valor.

Comments from friends and enemies. Don't forget to sign!

(Mal's player is a terrible artist, but lets see if we get some anyway) 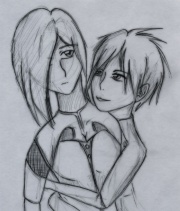 Mal and Susan. Art by Zyxith 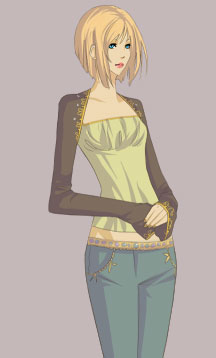