Originally, Ally Phoenix was a character made from boredom and a case of Alt-itis. Without ever intending to keep her, Ally ended up becoming my first Level 50, my first full fledged RP character, and my favorite character.

Born to mutant superhero parents Artemis Leridis (her Greek mother) and Jake Phoenix (her American father), Ally Phoenix was the first of a pair of twins to arrive into the world. Growing up comfortably from the ample income her parents acquired during their Hero careers, Ally and her sister wished for nothing more than to turn out just like them. Born with an ability to read and control things with her mind, Ally only hoped and wished to show the world what she was capable of. Her mother would have none of it however, deeming Ally ill-prepared and too eager to face the real world and use her powers recklessly.

Nevertheless, her mother's refusal only provoked Ally's determination to prove her wrong...

During her younger teenage years, Ally had trouble controlling her telepathy. Having not learned to shut her mind off, Ally's head was filled with people's voices almost at all times. Insomnia was the biggest threat in her life with her over-active telepathy keeping her up most nights.

A Vahzilok member Ally would have encountered

Although most people are asleep during the night, Ally's telepathy could pick up the faintest of noises and thoughts, mainly people having nightmares. But one night, one little boy's nightmare seemed all too real to pass up.

The whimpers and quiet cries in her head were too overwhelming and Ally took it upon herself to find the source. Riding her bike through the night, the voice grew louder and louder; she was getting close. Reaching just outside the city near an industrial waste plant, Ally saw him; a little boy crouching and crying under the awning of a sewer entrance. Jumping off her bike and rushing towards him, she was already too late. In a flash, the sewer gate flung open, hurling the little boy into the air and landing with a loud thud and crack, he was instantly dead. Growing hot with anger and shock, Ally sprinted towards the gate...but out came a huge mob of Vahzilok grabbing at her and pulling her. Screaming at the top of her lungs and kicking as hard as she could hardly affected their goal of getting rid of her. Carrying her to a large vault filled with industrial waste and toxic, they toted her up it's ladder and with the distorted sound of laughing, they dropped her in.

Slowly drowning in the toxic waste, Ally's mind was flooded with thousands and thousands of thoughts, none of which were her own. She even heard her parents' gasps of realizing she was gone. Growing tired and weak from struggling, her mind finally started to drift off. Letting herself sink in the toxic, she thought it was over.

Awakening in a hospital bed startled and disoriented with lights, probes, and wires on her head, Ally thought she was dreaming. Gasping with relief, her parents yelled for the doctor. They explained that Ally had been in a coma for 5 months and 3 weeks. Almost half a year. She had been found, seemingly dead, by a plant worker in a vat after it had been routinely drained for the arrival of another batch of waste.

After being brought into the hospital, doctors found she wasn't dead after all, she was in a deep sleep, even deeper than a coma. Unable to figure out what was going on, the hospital called in consultants from G.I.F.T to aid them. After running test after test, it was revealed that Ally's psychic ability went on auto-pilot, and put her into a "self-induced" coma which protected her body from complete system failure. Not only was she protected, but turns out, she was further enhanced. The toxic waste mutated her DNA even further, leaving her with the ability to manipulate atoms into radioactive material and energy.

Struggling with depression and post traumatic stress syndrome for a couple years put Ally behind. Unable to cope with the fact that she inadvertently caused that little boy's death put a strain on her and her family. Going through many therapy sessions and G.I.F.T counseling sessions slowly helped Ally return to her normal self.

Realizing her newfound potential, Ally set out to once again prove herself, but this time, she wouldn't be so careless about her actions. Turning a new leaf, Ally moved out to Paragon City with her twin sister. There, she hoped to reach her potential with her abilties and fight for that little boy she couldn't save, and those that can't save themselves. Quickly finding her place in Paragon, Ally joined up with a group of mutants also dedicated to her own cause, and thus her real hero career and journey began -- with Evolution-X. 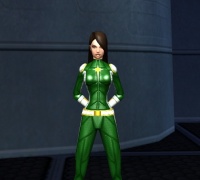 After sending Ally off to Paragon, her parents used a few of their former superhero friends and contacts to get her into the prestigious Evolution-X institute for mutants. After contacting their friend, who was an officer in the institute, they approached Ally and invited her to join them. As soon as her enrollment was official, Ally began her ascent in the ranks of the members. Starting off as a cadet, Ally used her supporting role and her ability to lead and work well with others rather than her raw fighting skills to make an impression on the officers.

Evolution-X administration was so impressed by Ally's skills, along with her fellow graduate Steelo's, that promotion to higher rank was not a question of why, but a question of when. Only a few mere weeks after graduation, Evolution-X held an assembly to congratulate the two and award them their promotional rankings of Executive Officers/Co-Captains.

Now a long time member and Captain, Ally helps the institute's frontline along with her Co-Captains Steelo, Metal Smith, and Attache'.

After joining the many members and students in Evolution-X, Ally was ready to learn more about her powers and make new friends when one of them in particular caught her eye.

Roughly around the same time Ally joined the Evolution-X ranks, one member by the name of Shane Steelo joined as well. Always ending up being partnered with him for various missions caused the two to become attached. Steelo's distant nature peaked her interest, and soon enough, she finally caught his attention as well. After working together as partners and becoming a popular pair of friends among the students, their bond grew further than most people's of their own age. To this day, Ally and Steelo still work together on many mission runs; their qualities combined makes for one fierce match.

Ally is known as the typical Cheerleader type, but without the stereotypical dimwittedness. With a twang in her bubbly speech along with her charismatic air and beauty, Ally's spunk tends to rub off on people. Extremely loyal and free-spirited, she wears her heart on her sleeve, but that is not to be mistaken as a fault. Ally is also tough, strong-willed, and has a great perception of character. Never afraid to speak her mind and let her thoughts be known, her aggressive sarcasm is sometimes mistaken for bitter bluntness. But Ally is far from that. She is protective and kind by nature, almost matronly, usually portrayed as the mother of the group. 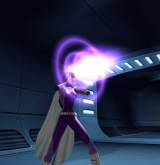 Alpha Phoenix originally only had the ability of a powerful telepath able to use telekinesis and various other telekinetic abilities. She was also able to project "Psi-blasts" as well as possessing limited pre-cognition which happens at random.

Now at the peak of her abilities, Ally is able to psionically manipulate almost anything, including her own secondary mutation. 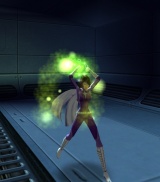 Using radioactive molecules
After the Vahzilok incident, the toxic waste mutated Ally's DNA even further rather than completely obliterating and shutting down her systems. This left her with the ability to manipulate various molecules, atoms, energy forms, and states of matter. Although she can only manipulate these molecules to radioactive/toxic form, Ally can then manipulate it further to use it for her needs such as healing, attacking, protecting, or helping her comrades.

Ally uses her abilities to manipulate molecules to further accelerate her own leading to an increased metabolism as well as peak physical conditioning. Able to run at super speeds and telekinetically "push" herself to leap great distances. She can also use her telekinetics to teleport others but she is currently unable to teleport herself.

-She is unable to consume any type of alcohol and most highly caffeinated beverages due to her unstable radioactive metabolic makeup.

-She must constantly eat to keep up with her extreme metabolism.

-Since Ally is part Greek, she loves to cook Greek food, eat Gyros and baklava, and enjoy an ice cold frappe (low in caffeine of course) as much as she can.

-She is fluent in Greek.

-She hardly speaks of her past.

-She prefers not to show off her telepathic abilities too much.

-Is very into fashion.

-Since Ally's parents were also superheroes, feel free to acknowledge that in RP with her (although she or her family may not be Statesman or Sister Psyche-famous, she would be known in some circles).

NOTE: Although I do not like the idea of people making their characters almost godlike with their abilities, after 4.5 years of playing Ally I'd have to say that by now her powers would be at their peak performance. That includes her ability to telepathically read people at will regardless of psychic blocks/barriers/etc (unless of course you are a robot or possess no "mind") and her other abilities. However, I do not normally RP her to that extent since as stated above Ally prefers not to "show off" her abilities unless she finds the circumstance requires her to.