"Where liberty dwells, there is my country." Benjamin Franklin

American Maiden is a heroine in Paragon City and a member of the Golden Age Heroes.

Elizabeth “Betsy” Burton was born in Boston, Massachusetts. Her grandmother, Annabelle Lynch-Burton, was once known as the superheroine American Maiden during the 40's and 50's. Betsy would often spend hours talking with her grandmother about her many heroic exploits both during and after World War II. Growing up, Betsy had hoped that maybe some of her grandmother's powers had passed to her and that she could become a superhero herself. However, this was not to be; Betsy would not gain any of her grandma's legendary superhuman strength or invulnerability.

After hearing of her brother's actions in the Middle East as a Marine, Betsy decided to join the Army after graduation. Her high marks on the Army's vocational test pretty much gave her a choice of career's in the military. She decided on Military Intelligence as a Military Occupational Specialty, and so after attending basic training at Fort Jackson, went on to intelligence training at Fort Huachuca, Arizona; and eventually led to her entering Officer's Candidate School.

After OCS, Betsy found herself working alongside intelligence operatives within Longbow as well as members of the superhero community. Many of her missions involved gathering information on such groups as Arachnos, the 5th Column, the Council and the Malta Group. It was during one such operation that Elizabeth Burton's life would take an unexpected turn.

Betsy was contacted by an informant about a secret laboratory being run by the Council; who were performing experiments in developing metahuman abilities for their soldiers. Following the information given, Betsy located the base, but was ambushed by the Council, who had set a trap to capture her. Rather than brainwash her and make her a deep cover operative, the base commander decided to use her in the latest batch of experiments the lab was performing. If she didn't survive, it would be one less enemy the Council would have to deal with.

Betsy was subjected to various forms of radiation and energy, and injected with numerous chemicals during the testing phase. But before any results were achieved, a team of Betsy's hero allies located the base and came to her rescue when she didn't report in to her superiors. The scientists and soldiers were captured and Betsy and the other test subjects were freed and taken for medical treatment. After several weeks in the hospital, Betsy was given a clean bill of health and allowed to return to active duty.

However, the Council's experimentation did have a lasting effect on Elizabeth Burton. She discovered that she was able to control a concussive energy within her body and that she could project it as blasts of force or as an added punch to her fists. Keeping her new abilities a secret from her superiors, she asked for reassignment to Longbow where her knowledge of the various enemy groups heroes faced would be more beneficial. As an agent of Longbow, Betsy Burton continued to work with both heroes and the civilian authorities in their battles against these enemies.

When the legendary heroine Lady America had been killed in action against the Rikti, the government began searching for a new woman to assume the name and title. Betsy applied along several other candidates from all branches of military service. After weeks of physical and mental testing, Elizabeth was selected out of the remaining candidates; her existing powers giving her an advantage. And then donning a costume specially made for her, Elizabeth Burton set out to Paragon City as the new Lady America.

However, as Lady America, she received less than a warm reception from the hero community; many of whom greatly respected the original Lady A, and saw Elizabeth as a second-rate hero trying to fill the shoes of a dead woman. This negative reaction caused Elizabeth to second guess herself all the time, and eventually, she dropped out of the project; unable to live up to Lady America's reputation.

When the original Lady America seemingly returned from the dead, Elizabeth was happy to give her back her name and title. After her perceived failure as Lady America, Elizabeth sunk into a deep depression and began drinking heavily. She resigned from Longbow and spent a month in a rehab clinic drying out. After getting out of rehab, she returned to Boston to try to rebuild her life. Even though she still possessed her powers, Elizabeth had no intentions of using them any longer.

This was until her grandmother came to her. She told Betsy that she didn't need to follow in Lady America's footsteps; that she had another legacy that she could proudly carry on; namely that of American Maiden. Realizing her grandmother was right, Elizabeth Burton once again donned her costume and rechristened herself as a new American Maiden for a new generation.

Betsy served as a senior officer to her team, the United Sentinels of America, as well as Longbow's liaison officer, helping to foster cooperation between both organizations. When the Rikti began to step up their attacks on the city, Betsy lead an assault against one of their dropships; which was headed towards a residential district in the city. pushing her powers to their limit, Maiden was able to successfully destroy the Rikti bomber; however, as a result of the stress on her body, her powers faded and eventually burned out.

Betsy went into retirement both from the USofA, and from Longbow after the incident; preferring civilian life to being "useless". She once again returned to Boston to be with her family and would remain there for almost six months; coping with the loss of her powers.

Then in unexpected move, Boston was attacked by the Rikit; after having been spared most of their heavier attacks since the aliens return. A squad of them teleported right into Betsy's neighborhood while she was helping her father in the yard. When one of the Rikti fired his blaster at Betsy's father, she shoved him out of the way and took the blast herself. To hers and her father's surprise, the energy didn't hurt her; but rather somehow triggered the reactivation of Betsy's powers.

Exhilarated at their return, she quickly defeated the invaders and then donned her old costume to aid the other heroes in Boston in beating back the Rikti. American Maiden's presence in the fight was enough to boost the morale of the outnumbered and outgunned heroes; leading to their victory against the Rikti. For Betsy, being back in action after so long helped her to make the decision to come out of her retirement and return to the job she loved so much. And so saying goodbye to her family once again, Betsy returned to Paragon City.

American Maiden is a former member of the United Sentinels of America and Longbow. She is now a current member of the Golden Age Heroes.

For the beginning of her career, American Maiden felt she needed to prove to herself that she could carry on her grandmother's legacy, while at the same time make her own name in the superhero community. Her triumphant return from the loss of her powers and her presence at the battle of Boston however, has shown to her that she is an inspiration to others seeking to overcome their limitations, and to never give up no matter the odds.

American Maiden possesses the ability to control and project powerful concussive energy. She is capable of releasing bolts of energy at her targets which can knock her opponents back, as well as focus her energies into powerful energy punches. American Maiden can also focus her energy behind her to generate thrust, enabling her to fly. 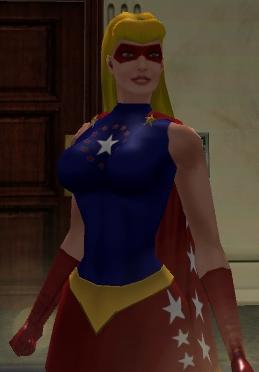 American Maiden's costume is highly resistant to damage and provides her limited protection from the elements.