Amethyst Thunder operates as a hero in Paragon City. However, he originates from Praetorian Earth and has escaped the clutches of Emperor Cole. Before his arrival in Primal Earth, he worked for the Wardens in The Resistance, mainly doing black ops work due to his abilities. He currently resides in Steel Canyon sector of Paragon City. By game mechanics, he is a Stalker. The creation of this character was inspired by the hero Nightwing from DC Comics.

Nathan Mitchell was born on January 28, 1987 in Imperial City. He was born to mother Kendra Mitchell and father Donald Mitchell. Both parents were engineers for Neuron Technologies Unlimited. As he grew up, both parents would discover that he had a knack for the world of science. They would have him read books on anything involving the subject including physics, astronomy, chemistry, you name it.

Nate began school at the age of 7 in the first grade. Teachers would find it difficult to educate Nate because he would get absolutely bored in class. The following school year, he would be skipped to the 3rd grade. Things were still too easy for him so he was skipped yet another year and he'd enter the 5th grade at 9. At 10, he entered junior high school. This pattern continued. Test after test, he would pass flawlessly. Ultimately, he would graduate high school at the age of 14. By then, he was granted admission to CDEC. Even then, educators would find that he was beyond these courses.

He would later be discovered by scientists and they would lay witness to his academic prowess and knowledge at a science demonstration that CDEC hosted that year.

Because of his academic knowledge and grades throughout school, Nate would be offered an internship at his parents' place of occupation, Neuron Technologies Unlimited. Here, he would gain knowledge on elements used for clockwork, how their AI was created, and even learned the basics on how Praetor Berry gave himself powers. Of course, there would be details left out of that and this is what Nate became very interested in.

During his time here, he would be involved with assisting with the creations of Praetor Berry's clockwork and monitor and tweak their AI. However, his thirst for knowledge (so to speak) was mainly focused on the chemistry of humans. Particularly, their genetic make-up. He still did his work diligently and was recognized by the actual employees for his efforts. However, this recognition would be a bit short-lived.

After three years of hard work, rumors started to float about Nate. Word had it that he was stealing confidential documents for his own personal use. More rumors surfaced about his paying people to keep their mouths shut. As time passed by, the rumors got worse. There were even rumors of him actually being a part of The Resistance and he planned on turning Neuron Technologies inside out. There were even rumors that he was the cause of a Resistance raid and was responsible for the deaths of several scientists.

When finally confronted about these rumors, Nate was completely lost. He had a solid alibi against his accusations and even others that he had worked with knew where he was. It was clear that Nate did not do any of these things. However, upper management was still not convinced. They apparently had no choice but to terminate his internship, ending his dreams of becoming a brilliant scientist.

Nate was completely devastated at this. But what hurt him most was that his parents did not defend him against these accusations. He couldn't figure out why they had not backed him when he needed them most. This caused tension between him and his parents. They bit back saying that he should have been more aware of what was going on. Ultimately, this lead to Nate disowning his parents and left them for good. He would be left homeless for a week until he came across a young man who seemed to be about his age by the name of Aaron Walker.

Nate would later be given connections to the Resistance members and would learn that what had happened with all the accusations in Neuron Technologies was all a set up. Many of the veteran scientists apparently did not like Nate for his knowledge and had purposely given the Crusaders an opening to where they could attack the building and later have Nate blamed for it.

Knowing this, Nate knew that he needed to make a decision. He eventually got in contact with Calvin Scott and became a Warden member of The Resistance. During his time here, he would be a member of the medic team, using the knowledge he gained from his internship to heal the wounded. At the same time, Nate would be allowed to experiment with curatives and other chemicals to better help their cause.

There had been several times where Nate was asked to come along on missions carried out by the Wardens and the Crusaders in case of any immediate injuries. But along the way, he would recover blood samples and hair samples from several members of The Destroyers, and telekineticists of The Syndicate. He figured that by keeping cultures, he could figure out a way to splice their DNA and possibly figure out how mutants got their powers. In other words, he wanted to replicate a DNA mutation so that its carrier would get powers.

When carrying out this experiment, there was a factor that Nate did not take into account. The Destroyers regularly take a drug by injection called Fixadine. In creating this serum, Nate was able to splice the DNA of several members of The Destroyers and several telekineticists from The Syndicate. He was hoping for the host of this serum to receive telekinetic powers and he was almost certain this would work. He also noticed that the serum changed color over several hours from green to violet. He thought it was odd, but found nothing different when he examined it after the color change.

He had asked several members of the Wardens to see if they wanted to be a guinea pig. Unfortunately, he didn't find anyone who'd be willing to cooperate. Then, he figured that he'd be better off if he gave himself powers. He'd be able to fend for himself better and he wouldn't be completely useless and become dependent upon others for their fire power and protection. So he injected himself with the serum he created.

He felt fine at first, going about his day normally. Six hours later, everything changed. He started to get excruciating migraines. His vision became blurred and darkened. The migraines did not get better as the hours passed, they would only get worse. His body would also start emitting electrical charges in the same color as the serum he injected into himself. The hair follicles on his head and eyebrows also began changing color. It got to a point where he surged in electricity and not only damaged The Static network, but also several city blocks up above in Imperial City.

Before he knew it, he was being tended to. He woke up to several Wardens staring at him from above. Looks like he passed out, but he actually just came to from a seizure he suffered from. He then knew what he needed to do. He needed to make something else to counteract the side-effects and to soften the blow to his genetics. He created yet another serum which he immediately injected in himself and he felt better several hours later.

Because of factors that Nate did not consider, he actually received electrical powers rather than telekinesis. On top of that, he was able to almost phase himself out of view and run at speeds exceeding 800 miles per hour. Having some discussion about this with Calvin Scott, Nate was placed in his black ops division and began undercover work for him. He weaseled his way into being part of Powers Division in order to uncover what was truly going on with the Praetors, Loyalists, and Praetoria as a whole.

He would discover that he needed to double-cross some of his friends in the Resistance in order to infiltrate the Loyalists. One of these events where this was most prominent was with his run-in with Resistance member Vanessa DeVore. He had to make it look like he was subduing her, though he really did not want to hurt her. After carrying out this mission for "Mother", he would be able to talk his way out of her being disappointed in him.

When he learned all he could about Praetoria, he decided that he would take the fight to the other side. He would arrive in Primal Earth as a refugee and see about stopping this war that Cole had brought on to this dimension.

He would meet a younger man named Cayne while scoping out a place he heard about called Pocket D. Nate would learn that Cayne is a mutant from Praetoria who also came here to have a better life. Despite Cayne's attitude and carefree outlook in life and Nate's own negative perspective, Nate would find himself attracted to Cayne.

Nate currently lives in Rolling Hills Apartments in Steel Canyon and is a teacher's assistant in Paragon City University in the same sector because of his knowledge in sciences. 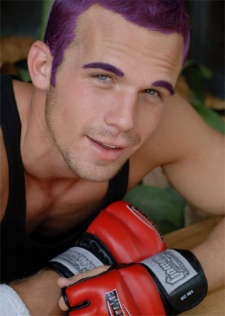 Nate received his powers by mixing, splicing, and otherwise modifying DNA from members of The Destroyers and the telekineticists from The Syndicate. Unfortunately, he did not take into consideration that The Destroyers regularly take Fixadine. Because of this, the Fixadine further mutated the DNA that was present in the serum.

His now altered DNA has allowed him to almost completely phase out of view.

It has been measured that Nate can run at speeds of over 800 miles per hour. Very seldom does he run at this speed, however. Much less half of this speed.

Due to his knowledge of chemicals, he is able to make tranquilizers.

Thanks to Cayne, Nate has started a small blog. He doesn't update it as much as he'd like, but it's kept fairly up-to-date. You can see it here.

People he has met thus far.