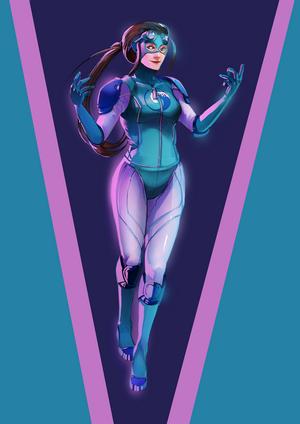 The Awesome Aquanaut is a hero through and through! You can find her on Everlasting on the Homecoming servers currently, a human mutant just looking to make the world a better place while trying to balance out her home life with her heroic life. Tireless in her pursuit of justice that can sometimes have adverse consequences in every other aspect.

Born Kara Cooper in urban Canada, this young mutant has struggled for years to live up to the hero legacy left by those that came before with the powers her genetic lottery provided for her. A young Hydrokinetic, she will fight crime with a big smile and a larger than life attitude! So give her a call and don't be afraid, The Aquanaut Won't let you down.

Born north of the border Aqua led a fairly normal life, going to school, attending classes, making friends. It wasn't until she turned sixteen that her powers had begun to manifest in.. admittedly silly ways. Water would move and avoid her or follow her around. She wasn't sure why or how this happened, all she knew was that she was the direct result of it. It was months of cat and mouse with her and water, learning how to control this wayward ability until it became a non-issue! But the question at the back of her mind, what else could she do?

That's when she turned to comic books, her collection. It wasn't a distant memory she still had plenty of books, games and even a few films that she enjoyed that glorified heroism. It didn't take her long to figure out what she wanted to do with her newfound gift, she wanted to become a superhero. With a little work and time she threw a costume together out of her old one-piece swimsuit, some swim goggles and a pair of shoes; she began to call herself 'The Aquanaut.' Little did the young girl know that hero work was a lot harder than the comics she read made it out to be.

At first she thought she could stop crime, but she had no idea how to find crime in a city like hers to no avail, then she thought she could help stray animals only to get chased off by a pet owner for her efforts. She was stumped, she tried doing a few good deeds like cleaning vehicles or shoveling snow for a little while but it wasn't the excitement nor the sort of good she wanted to do, it was frustrating and moreover a little demoralizing for the young Aquanaut and for a while it was like this, it gave her time to refine and work on her abilities but it wasn't the same as stopping a real crime, She'd soon find out however how dangerous it could actually get.

The fateful day she walked into her favorite corner store for a snack food run she noticed something was off and by off there was a man at the front of the store holding the little old lady up at gunpoint. At first she was excited, it was her big break! But that quickly turned to fear, this person had a loaded gun and it was aimed at a friend.. that fear turned to anger and she sprung into action. That was her first mistake, instead of using her powers to disarm the felon she leapt at them and for her efforts she was shot. Young, foolish, impulsive. She didn't save anyone that day; she was shot and the crook still got away with the money.

It was a dark day for her, scolded by her parents for being reckless and confined to home she had hit a low-point. The Aquanaut and any of her heroic endeavors had been put on hold, she was ashamed. Not because she'd been punished but because in her mind she failed and that had simply put a stop to her dream. It would be years continuing to lead her life as normally as she could, facing the prejudice of being a mutant as best she could and making friend when she was able, though they were far and few. She found comfort in books, keeping to herself to avoid harassment when she thought it could start back up. When she wasn't nose deep in books she worked on controlling her powers, practicing to keep herself on top of them just so she could avoid accidents.

By the time she even considered picking the moniker of Aquanaut back up again was years later by that point, she'd just started her post-secondary when she wandered into that corner store again. It was a place she would visit less and less as the years went on because of what happened prior but she still popped in from time to time. It was unfortunately that day when the events of the robbery played out again, it wasn't the same man and the old lady's daughter had taken over in the years since but the situation felt the same. She trembled, she was afraid, scared. The memory played back in her mind as if it were overlaying the two scenarios together. It was then the familiar anger bubbled inside, she was afraid but this man could harm someone and she wasn't about to let that happen.

Unlike last time Kara's hand would shoot out and the bottles of water in the far corner of the store would explode startling the man with the gun and it didn't take long before that very water would blast into the man sending him into a far wall. The collateral damage amounted to a few shelves but that didn't matter as long as she had the man on the ground. Separated from his firearm she took a defensive position between him and it until the cops arrived to subdue the man. It was triumph, overcoming a fear she had engrained in her for years.

She wasn't hailed a hero but she certainly felt that way, when she got home she told the whole story to her parents and rather than being scolded she was congratulated and even hugged. It was that feeling, that accomplishment that she wanted to feel more of. Fast forward a few weeks later and she discovered an Academy designed to train new and upcoming heroes. She immediately told her parents and they agreed to help her get to Paragon City, so within an hour she sent out her application and she was well on her way toward becoming a hero proper. Eventually she would graduate to become a hero in her own right. She spent her time thereafter protecting the streets of Paragon from the criminal elements that plagued it.

"Ice to meet you!" - Aquanaut during patrol. 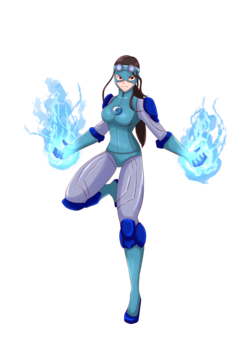 "Hello there, name's Aquanaut and I'll be your hero for the day." - Aquanaut during a rescue.

Kara isn't a totally selfless person but she does her best to help out as many people as she can, she's quiet and a bit of a bookworm which has often led to her avoiding people unintentionally. Her best friends are often the books she's reading when she isn't around her friends and family. Shy and a little closed off until you get to know her but an ever loyal friend.

As the Aquanaut, she's heroic, courageous and filled with confidence. She isn't afraid to run headfirst into danger to help someone even if it isn't always the smartest play of the game. A bit of a sass with a lot of puns in that head of hers that loves to knock a few villains down to size, though her strong moral code will always do its best to guide her away from killing; no matter how much someone might get to her. She is at her core a hero and will always strive toward living up to the example of those that came before, the inspirations for her entire Heroic Persona.

Being human both Kara and Aquanaut suffer from the same faults, she'll never ask for help even if she needs it, she can have a bit of a temper when upset and become indignant when challenged. Not always the most level headed but she'll always act with the best intentions in mind no matter the situation.

"Let's check my contacts list here.. where's my phone?" - Aquanaut after she lost her phone.

Main Theme:When I swing by - Miracle of Sound