Arameah is a member of the Paragon Cavaliers Supergroup. She is currently the band's base player, and the group's expert on demons.

Arameah Azielle is a demon; that is, a person of extra-dimensional origins. She hasn't spent a lot of time around humans, socially, and other than a strong sense of right and wrong, she finds much of their behaviour mystifying. She is kind, has a wonderful sense of humor, and likes to laugh and joke, but often finds herself feeling lost or confused when presented with the many complicated convolutions of Human Society. She isn't afraid to ask questions, though, and often finds herself accidentally offending people by not understanding the reaction they expect her to have - and rarely has. She is very intelligent, and knowledgeable, but often finds that "book learning" is little help in understanding those around her.

With a family well versed in magic, Arameah has a healthy "book" of spells at her disposal. She has many spells that affect the mind, or the transfer of energy. She can confuse, stun, or mentally attack another target - or several targets. She can transfer health and endurance from enemies to allies, or even effect the inertial force of herself and others, making them capable of phenomal leaps. That isn't the limit of her grimoire, but it does give one an idea of her capabilities.

Arameah is NOT human. Humans (whether they be mutant or otherwise non-standard) mystify her. She tries to fit in, and often has little trouble, but when faced by the strange ones, those that seem to expect her to be impressed, in awe, or otherwise inordinately respectful/admiring of, she simply does not understand. Her family taught her that all creatures were equal, and she has never been impressed by posturing or simple words. Since she does not know many famous people, names rarely mean anything to her. This has caused her some trouble when interacting with people in Pocket D and other social settings.

Other than socially, Arameah is fairly set well. She isn't unusually tough, and once she begins to take a large amount of damage, she can be brought down very quickly if not assisted immediately.

Arameah still carries a wedding ring given to her by a woman named Stephanie. The ring has the ability to provide her with a forcefield, but she prefers to keep it as a symbol of something she admires in humans - love. Azielle can and do love, but they do (or did) not have the custom of marriage, the same way humans do.

The Azielle. A Clan of demons (i.e.: Extra-Dimensional Beings from Zell) that were famed for both their magical expertise and their dedication to maintaining the balance of the Universe. Beings came from all over, everywhere and everywhen, to seek out their help. When the balance of the universe shifted to the good, they would extend their services to Evil. When Evil held the upper hand, then assisted those who fought for good. This was their role in the universe, their sacred duty to maintaining true order.

Until the fateful day the Evil One came. Disguised as another applicant seeking the Azielle's assistance, the attack took even the arcane Azielle by surprise. The Clan was slaughtered, souls captured to be use for twisted, evil purposes. Many a magical weapon in the Universe is powered not by simple magic, but by the enslaved soul of an Azielle. Many a sacred book holds within it's seemingly innocent vellum pages the tortured soul of an Azielle.

Few escaped this onslaught. Among those few, were the muscular Auric, and his young cousin, Arameah. Auric escaped by shifting to another dimension with his young cousin, dragging the terrified teenager with him. Their new home - and hiding place - was anything but hospitable, a home for many evils that flourished in the harsh environment. Auric kept his young cousin safe, doing his best to keep them hidden and alive.

The summonings came as a surprise. Auric was whisked from Arameah's side, summoned to another dimension. This was a terrifying time for her. The first time it happened to her, the shock was even worse. She was forced, for a short time, to serve a simple human. His wishes were foten more than her power could provide, and being released from his service was a huge relief. Several more times, she was whisked away, always returned after fulfilling the often bewhildering requests made by the humans.

The last time was the most interesting. The human freed her in the city of Paragon, leaving her to go her own way. Left to her own devices, apparently safe from the seeking eyes oif the Evil that had devastated her family, Arameah discovered the balance of the Universe had shifted yet again, and her family's code brought her to Atlas Park, and the guidance of Azuria and M.A.G.I.

Now, she continues to fight for good, and always she keeps an eye out for any word of her family - and her beloved cousin, Auric. He is free, now, as well, travelling the 'Verse, looking for more Azielle that may have escaped the Evil one's cruelty... and finding the souls of his family where he can, and setting them free. He has found two female Azielles, Avayal and Amphreda, both of whom spend some time in Paragon or the Rogue Isles, when not in their new home. Auric found a place they could start a new warren. He and Avayal will be bonded soon. Arameah herself recently discovered Arcavius Azielle, a male Azielle that had been hiding in Earth's past, in Cimerora. She brought him back to Paragon, where he is finding much success helping out, the same as Arameah did. 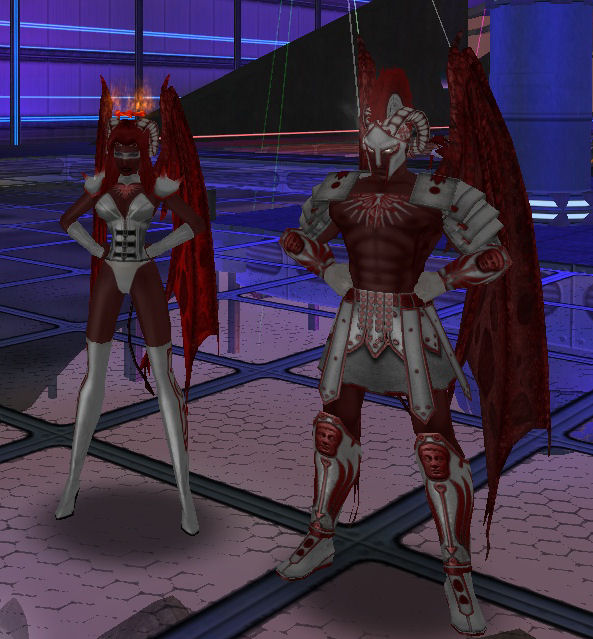 Her early training has been continued with the help of M.A.G.I., and her list of mastered spells has grown. Thanks to the good she has done, the Powers That Be have rewarded her with elevated forms - human, and recently, angelic. These forms are a reward and a boon, giving her the ability to somewhat blend in with the humans around her, as a human. As an angel, she retains much of her original form, with the addition of wings and an aura halo that heralds her true good nature.