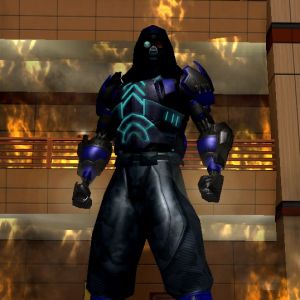 Mark Frost was born to functionaries within Praetoria's bureaucracy. Named for Emperor Marcus Cole, he grew up loyal to family and state, served by Clockwork as he wiled away with indulgence. With no need to work, he was free to pursue his hobby, archery. As an archer of Olympian caliber, he was approached by Praetor Sinclair. Frost took his offer without thinking, overjoyed at serving Emperor Cole.

Frost was brainwashed into Project Phoenix, a unit of deniable state-sanctioned assassins, and underwent grueling abuse to hone his body to kill. He slew dozens of suspected Resistance members before Sinclair demanded he kill his own parents, to make him truly unaccountable. Frost couldn't follow through, and turned in his resignation. Sinclair, disappointed, bade him return home... a home that erupted into lethal shrapnel. No loose ends.

Now, arrows in the night find the skulls of PPD and Powers Division. Screams of pain are silenced by servomotor arms. Archenemy doesn't die so easy.

Archenemy is easily recognizable as a small mass of scarified human tissue grafted to a blue-painted Clockwork. What little remains of his face is contorted in a near-perpetual scowl, ane he fusses with his remaining few tufts of hair like a celebrity fashionista. Most of his clothing is modified to accomodate the modularity of his clockwork limbs, and he is especially fond of the ease of tank tops when in his civvies. He has two uniforms that he wears when 'on the job' - a modified Longbow jumpsuit for stealth operations, and his old Resistance blues for when something needs to be blown up.

Mark Frost is aloof, caustic, and mean-spirited. Although not a sociopath, he has a severely atrophied sense of empathy and often distances himself from the suffering of others with sarcasm and irreverence. He is not especially intelligent by metahuman standards, but possesses the sort of intuitive technical understanding common to bomb-makers, machinists, and other terrorist-adjacent engineers. He is vindictive and quick to write off others as acceptable casualties in the name of a cause. Although that cause is presently personal liberty, a feature of his time with the Resistance, he once killed just as fanatically for the diametric opposite. His opinion is easily changed if the new stance means he can affect more mayhem.

In short, he's an asshole.

Mark was the child of Leonard and Marie Frost. His father was a manufacturing stockist for NeuronTech and his mother a civic coder who did work for Imperial City's traffic infrastructure. His family drank deep of the Kool-Aid (or Enriche, as it were) and he spent most of his upbringing steeped in pro-Cole propaganda. Like most Praetorian youth, he attended school via a system of computer holography, giving him a lot of free time to pursue hobbies. Although he dabbled in tinkering like his father, the hobby he would most take to is archery, which he eventually trained in to a competitive level. He holds three medals for Imperial University archery competitions, which presumably lie abandoned in a biomass-infested sewer somewhere in Fallen Praetoria today.

It was Mark's listlessness at school and great talent for archery that saw his family approached by Praetor Sinclar - colloquially known as Chimera - for an 'internship.' Blinded by the Praetor's fame, Mark accepted, only to fall down a rabbit hole of grueling physical training, brutal emotional abuse, and Behavioral Adjustment psychosurgery. Mark had been drafted into Project Phoenix, Sinclair's black-budget project to create silent assassins to dispatch threats to State control. Anonymous behind a respirator and cowl, Mark ended innumerable Resistance lives with his arrows, until one contract broke Sinclair's brainwashing.

When Sinclair tasked Mark to assassinate his own family - to erase his own past and eliminate all record of his existence - the young assassin couldn't do it. He dispatched a notice of resignation to Chimera and fled to embrace his family. Unwilling to let the secret of Project Phoenix be so jeopardized, Chimera made sure that the Frost family were obliterated in a "Resistance House Bombing" shortly therafter. Truly, these terrorists would stop at nothing to kill good Loyalist citizens.

Unbeknownst to Chimera and his Phoenix assassins, Mark Frost's body was recovered by the Neutropolis Resistance cell - or more accurately, a portion of his body was recovered. He awoke in the filthy Praetorian sewer system to find his vital organs, spine, and part of his head grafted to a hacked Clockwork as a temporary life-support measure. DeVore's men knew that he was one of the shadowy assassins who had been hunting them like animals, but a turned Project Phoenix asset was too valuable a capture to let meager ideology get in the way. Mark was all-too eager to meet the Resistance's expectations that he prove his loyalty in blood. He had no more family, no more friends, no more ideology, no more human body. All that was left was the drive to do violence against the society that had done this to him. The 'temporary measure' of a Clockwork life support system soon become a permanent one.

Archenemy - as he identified himself - is tied to several of the most heinous crimes of the late Resistance period. He participated in the Precinct 5 gas bombings, the Nova Praetoria neutron bombings, and the siege of Sinclair Industries. When Chimera fled from Resistance pursuers, Archenemy accepted an offer of exfiltration from Arachnos and moved to Primal Earth's Rogue Isles for additional training and material support, under the full expectation that he would return to Praetoria at the head of an army of supervillains. This expectation was cut short when Praetoria was devoured by Hamidon and Chimera killed. All those years of senseless revenge, now for nothing.

Archenemy defected from the Resistance fairly early on following the end of Praetoria. He'd only cared about its mission statement of fighting tyranny inasmuch as it meant he could hurt people who'd wronged him, and with most of those people now absorbed into the teeming biomass of Hamidon, the fire for vengeance left Mark Frost. Calvin Scott's alliance with the Council to battle the New Praetorians was the last straw, and formally cut the cord between Archenemy and the Resistance in favor of fully embracing the life of a solo supervillain. However, Archenemy likes power, influence and - to an extent - structure, so he was easily tempted into the service of the Conclave villain group rather early in his hero-hunting career. It provides a base of resources that he's happy to draw on, and its mysterious paymasters always have a need for jobs that indulge his thuggish nature.

Today, Mark "Archenemy" Frost is a super-hitman who kills metahumans for profit in both Paragon and the Rogue Isles. It's something he got exceedingly good at as a Project Phoenix assassin and later member of the Resistance, and on Primal Earth he sees no reason to leave the hero-hunting business as long as he turns a profit.

His prices for dead capes are, however, exorbitant, seeing as he has to do the research and make the specialized ammunition to counter sundry invulnerabilities and healing factors himself, not to mention bypass the emergency medporter system. This means that in practice, Mark is usually more affordably contracted to thin the herd of expendable superthreats such as Longbow or Freakshow. His favorite target is Wyvern, and he's gained some notoriety in underworld circles for absolutely terrorizing Justin Sinclair's pet PMC. This has lead to some underworld speculation regarding a secret history with Wyvern, which he actually doesn't have; he just hates all Justin Sinclairs in all dimensions on principle, and likes to break Sinclair's stuff.

Archenemy first came into contact with Lette Hirthal and her Court of Acanthi when he was subcontracting for Crey to gather a tissue sample from the Vindicator, Mynx. After Mynx trashed one of his Clockwork bodies, it became clear that additional personnel support was required, and when he accepted an offer of help from - of all things - a woman identifying herself as a fairy queen, he didn't think twice about the zany habits of the Primal supervillain diaspora.

As it were, he learned the hard way that fairy boons and debts can be used to compel their holders, and soon fell into the (brief) service of the Court of the Acanthi, tracking down Arachnos agents who had threatened some servants of the Queen. This in turn lead so some uncomfortable interactions with the Ivory Tower, as expanded below under "Spider Drama."

Freed of his boons now, Archenemy still works with Queen Lette Hirthal of the Swamp as a sort of 'preferred client.' Her checks don't bounce and she covers his weaknesses to magic as a tech-origin hero, although he's shifted from his role as an investigator into that of a Rogue Isles fixer. He was, for instance, the one who put the Court of the Acanthi in contact with the supervillain Zeyiri Valdrus, in exchange for a hefty finder's fee.

The culmination of Archenemy's active service with the Acanthi was when he dug into an Arachnos plot to distribute a new narcotic, Death Dust, to the Skulls, through agents seeded within the Paragon City Council. After Archenemy infiltrated the City Archives and positively identified Arachnos Agents working within the civic apparatus, he was confronted by agents of the Arachnos intelligence officer Lord Supremacy and bribed to destroy City Hall's employment history, which he did.

This, unfortunately, alerted Longbow to his presence and instigated a multi-day running battle through Paragon's abandoned Sewer System, a smelly affair that lead to Archenemy earning the pejorative nickname "Sewer Sniper" for his troubles.

In the end, however, he got the last laugh. The Ivory Tower sidelined a number of lucrative contracts Frost's way, and he took on these easy - and high paying - jobs to solidify his ceasefire with Arachnos intelligence. Sometimes, in the dog-eat-dog world of the Rogue Isles, everybody wins.

The Assassination of Paxil Zap