An axiom is an assumption which is taken to be true a priori, either because it is self-evident or as an initial necessary consensus for building further theory. In Axiom Man's case, the axiom is conviction; a belief in the importance of our actions, the validity of logic and reason, and the value of our own innate moral sense over nihilism, superstition and relativism.

With AM I wanted to do a classic hero, one who isn't plagued with doubts and who doesn't really have a dark side.

As one half of the Axiom Man & Paradox Girl team, he is the powerhouse of the duo, bringing his might to bear directly upon antagonists while Paradox Girl uses her more subtle magical powers to manipulate probabilities and temporal rifts to confound their foes and turn the tide of battle. Out of combat, he maintains their abandoned subway base and attempts to explain Paradox Girl's more surreal pronouncements to the bewildered.

The symbol of the duo is a simple ying/yang; one partner exemplifies light, reason and technology, the other darkness, mystery and magic. One dresses in chic street clothes, while the other wears a bodysuit and armour in bright primary colours.

Alec's brother Peter was a former linesman for the Paragon Power Company, and until recently active as the Iron Guardsman. After a crushing defeat at the hands of Andrew Spartan and his ex-wife Jan Benton, he retired to civilian life to look after his adoptive daughter, Courtney.

Confident, focused, analytical and impulsive. Alec is always building something or trying to solve some problem. He's a man of few secrets and with the exception of his sister-in-law, he has no known skeletons in the closet. Prior to his encounter with the Tryl aliens, he suffered from depression and a disillusionment he tried unsuccessfully to shake off by diving into his work.

Most of Axiom Man's powers derive from his equipment. He's something of a packrat, combining gadgets with a mixture of light and heavy armour.

Alec is a gifted philosopher, physicist and engineer.

Beneath the suit Alec is only human, and vulnerable to mind-affecting abilities.

The axiom suit was designed for scientific research and exploration. It consists of 2048 identical nickel-sized hexagonal cells, each containing a tiny power plant, force field generator, and networked computer along with an array of scientific sensors and power conduits. With no central generator for either power or the suit's forcefield, these systems are very difficult to disable. The suit can continue to function when up to 85% of the cells have failed. However, the cells are fairly fragile so the system is vulnerable to attrition.

Armoured rocket boots and repulsor guantlets. Each gauntlet contains a supplemental power core and a Rikti-derivative antigravity device to offset the weight thereof. When supported by the forcefield of the Axiom Suit, the Guardsman armour also provides Axiom Man with superhuman strength. 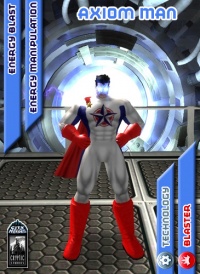 Axiom Man transformed.
One of Portal Corp's brightest stars, Alec Benton developed the Axiom Suit and explored many new universes that had been previously off-limits due to the unpredictable and hostile conditions there. He became Portal's first necronaut, stepping through a portal into a timeless realm of light inhabited by the souls of the dead. There, he became trapped.

He floated for an age before he encountered the spirits of the extinct alien race known as the Tryl. They told him that the reason he was unable to return to earth was that he hadn't 'forgiven' the world. Without truly acknowledging it, he had seen the world as cruel and meaningless, and sought an escape through his work - hoping to find worlds without brutality or ennui.

When he asked for their help the Tryl explained their philosophy of 'everything is best'. The world is precisely as it should be; anything aberrant exists only in our mind. The Tryl had died out voluntarily, reaching a kind of nirvana. Alec told them their complacent philosophy wasn't for them. To his surprise, they agreed: "This, too, is good and perfect."

They explained to him that he was a part of his world, and that his very dissatisfaction with his world proved that it was becoming a wiser, kinder place. His existence was part of that equation. This realisation gave him the strength to return home and turn his invention toward his new-found purpose.

When he arrived, the time-traveller Paradox Girl was waiting for him with the weapon system he needed, having foreseen his return.

He continued to explore other dimensions, and during one such trip he entered a world where only concepts and ideas exist. Upon returning to Paragon City he found himself transfigured into a form which made no distinction between Alec, Axiom Man, or his equipment: A caped, muscular giant who could channel all the powers of the suit through his body.