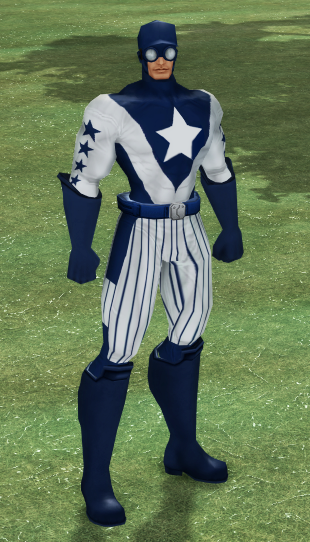 Richard "Ritchie" Jacobs was born to play the game of baseball. He knew it, his parents knew it, his friends knew it. Everyone who knew him knew it. Born in Cedar Falls, Iowa, Ritchie practically grew up with a bat in his hand. At the age of four he learned to pitch and by the time he was seven set his sights on becoming a professional baseball player. As he matured, his father pushed him hard, forcing him to wake up at five in the morning every weekday to train. But Ritchie didn't mind. He loved the game. He was a star athlete in high school, scouted by agents from across the country and was offered a scholarship by half a dozen different colleges. He centered the minor leagues after graduating, and a few years later the major leagues, having been drafted to the Paragon City Paladins.

During a particularly heated game, Ritchie was up to bat. After several innings of tension, he was hit by the pitcher as retaliation for an exchange that took place earlier in the game. Having lost his temper, Ritchie charged the mound. He and the pitcher fought in what resulted in a dugout-clearing brawl. In the chaos, Ritchie was knocked down and kicked repeatedly. Over and over again. Then suddenly, there was a ringing in his ears, he saw red, and then a loud BANG. When he was clear enough to stand, there was a six-foot wide crater around him. The players were all scattered around the field, yards away. The ones that weren't unconscious were shouting in pain and clutching broken limbs.

Ritchie was rushed off the field and when the smoke cleared, he watched the replay. In the middle of the brawl there was a bright pulse of light, then an explosion. One that had permeated from around him. In the days that followed it'd be determined that Ritchie was a mutant. And because he was unable prove that he never used his powers in competition, he was stripped of his medals and accolades. Everything that he'd built was gone in a flash. It was like his entire life and been erased. The entire ordeal shattered his confidence in himself. Embittered at the turn his life had taken, his relationship with his friends and family deteriorated. His girlfriend broke up with him. His sponsors dropped him literally hours after his status as a mutant was revealed. He lost his house and was forced to move into a dingy apartment. Basically, everything turned to s***.

With few options, Ritchie seriously contemplated a life of crime. He even planned on robbing a bank. But before he could work up the courage to threaten the teller, three masked men stormed into the building, fired into the air and demanded everyone's valuables. Unbelievable. Laughing at the irony of the situation, the robbers assumed he was laughing at them and beat him down as an example. For the second time, Ritchie's mutant ability was activated. The robbers were literally blown away. Thinking he had saved everyone on purpose, everyone in the bank cheered him. They actually cheered. It was almost as if he were on the field again

Reinvigorated, Ritchie had a new lease on life. He'd only used his ability twice and both times unintentional and during extremely stressful situations. Triggering them again was... difficult, to say the least. But like his old man always said. Championships are won at practice. Ritchie consulted with an expert on genetic mutations named Dr. Frederick Myers who determined that his specific ability was "absorbing and redirecting kinetic energy". Ritchie has no idea what that meant but the doctor broke it down as "get hit, go boom." With a relative handle on his abilities, Ritchie created a costume using his old baseball uniform. The whole of Paragon City was his diamond now. 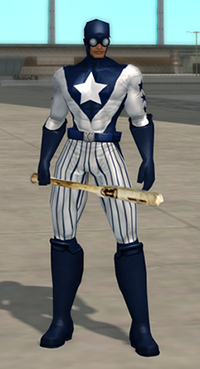 KINETIC ENERGY ABSORPTION: "Stand tall, talk small, play ball."
Ritchie's body is capable of absorbing kinetic energy through physical impact, temporarily enhancing his physical attributes. After absorbing enough energy, his strength and durability are enhanced to the point where he is nearly bulletproof and able to lift five times his body weight. He can also expel absorbed energy in the form of a large and extremely powerful concussive blast around himself.

ENERGY CHARGING: "Hit, Run, Score, Repeat."
Ritchie is able to transfer absorbed kinetic energy to objects. The power of his explosions is dependent on the mass of the object he is charging. For example, a charged baseball explodes with the concussive force of a grenade. He can also use this ability to accelerate an object's kinetic energy instead of converting; for example, he can charge his baseball bat with energy to cause wh
atever it strikes to explode with massive force.