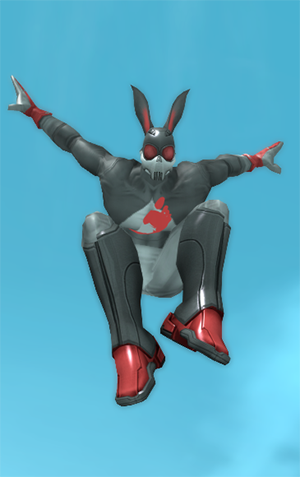 Roger Reed was born in Kansas and raised on a farm thirty miles outside of Wichita, the son of Jonathan and Gwendy Reed. Roger’s sister Lily died in an automobile accident chasing after Roger while the two were playing outside. Since then, he’s blamed himself, convinced he could have easily prevented her death. Wracked with guilt, Roger ran away and with few skills to speak of, he ended up joining a traveling circus, Moriarty’s Magnificent Menagerie, using his mutant ability to leap incredible distances to become an acrobat.

While a member of the circus, Roger thrived in a way he had never before, forging strong bonds with his fellow performers. Roger adapted his leaping ability to become a star carnival attraction, wowing the crowd with his amazing powers every night. His time there would come to an end however when declining business forced the circus to close.

Eventually Roger became a professional wrestler for a small promotion in Nevada. His time in the circus served him well as he’d developed a natural charisma that drew people in. However his promoter treated him with open disdain, having made his opinions about “freaks” clear on more than one occasion. He forced Roger to wear a grimey rabbit costume (because of his abilities) but Roger got over despite it, charming the crowd every night. He quickly became the star of the show so the promoter was forced to keep him on even though he hated him.

After some time wrestling, he discovered his boss was embezzling and taking a cut of the profits for himself. Before he could turn him over to the authorities however, he threatened Roger, claiming he’d frame it so it would appear he was in on it as well. Roger was forced to leave his job once again, traveling across the country, working odd jobs to survive.

Roger eventually ended up in Paragon after hearing the city was a haven for those like himself. Almost immediately after stepping off his bus, he and his fellow commuters were taken hostage by the master of table-tennis, Killer Serve. Roger managed to stealthily slip away into the bathroom and change into his wrestling costume. Because of his offbeat outfit the "supervillain" underestimated Roger who defeated him with a swift kick to the face.

In the weeks that followed, Roger would have at least half a dozen more encounters with super-powered individuals, all completely coincidental. There was a lot of crime in the city apparently. It got to the point where he just started wearing his costume underneath his clothes just in case something happened and he needed to spring into action. Finding himself continually underestimated due to his “silly” gimmick, Roger has actually managed to stack a few wins, earning himself an actual real life moniker - BOUNCE, the rousing, rabbit roustabout!

SUPERHUMAN LEAPING -"Hippity hoppity, there's no stoppin' me."
Bounce's primary power is the ability to leap to heights and distances far greater than that of an ordinary human. He possesses a degree of superhuman strength, particularly in his back and legs, which grants him his superior leaping abilities (able to reach 25 feet in a vertical leap and 40 feet in a broad jump), as well as deliver kicks with superhuman force.

SUPERHUMAN AGILITY & BALANCE -"You just can't knock me down..."


Bounce's overall balance is enhanced to a degree that he is able to achieve a state of perfect equilibrium in any position, able to adjust his position by instinct, which enables him to balance himself on virtually any object, no matter how small or narrow. As a skilled acrobatic, he possesses the prowess of an Olympic level gymnast, able to walk a tightrope as easily as most people can walk on a sidewalk. He can also walk on his hands for many hours, or perform complicated sequences of gymnastic stunts such as flips, rolls, and springs. He has incredible reflexes and coordination, and when combined with his leaping ability, can seemingly “bounce” off walls.