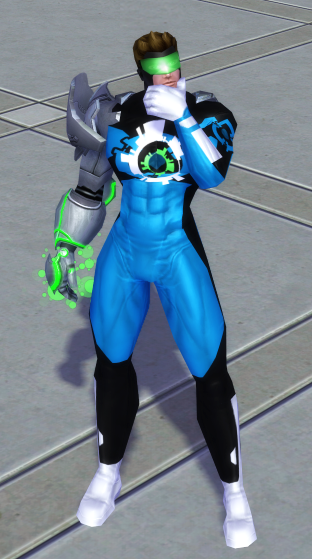 Disaffected youth Cooper Davis was born in Paragon City, Rhode Island to two average, hardworking parents who loved him very much. Which is why he had no right to be as angry as he was all the time. Spoiled as a child, Cooper frequently acted out, and it only got worse as he "matured". In high school he started hanging out with kids he shouldn’t have. On the path to becoming the living embodiment of an after-school special about the dangers of following the crowd and falling victim to peer-pressure. Drinking, staying out late at night and skipping school became Cooper’s favorite pastimes.

Cooper couldn’t see it but his “friends” frequently manipulated him. Whether it was sneaking them beer from his dad’s garage, lending them money, or staying behind and taking the rap for any of their misdeeds - In his mind, Cooper thought he was doing what friends do. Looking out for each other. He couldn’t see his loyal gestures weren’t being reciprocated. And when his parents warned him, it only served to push him further away.

One night, after an especially hard night of partying, Cooper and his buddies snuck into the section of the city called The Hollows. Formerly known as Eastgate, the now hazardous district was cordoned off by the city after it was destroyed by The Trolls gang, who set off a series of explosive charges in the many caves underneath the area. Cooper and his friends were challenged to venture into The Hollows and bring back some sort of trophy. Fueled by alcohol and an unhealthy amount of defiant confidence, they began their trek and were very nearly successful until they happened to run afoul of a group of Trolls.

It was Cooper’s first brush with the gang. Actually, it was Cooper’s first brush with any sort of gang. Angered by the youths’ presence in their territory, the group of Trolls gave chase. Knowing almost nothing of the local topography and also still fairly inebriated, Cooper and his friends made the worst decision possible - they tried losing their pursuers in the caverns. The teens doubled down on bad decisions when they decided to split up. Quickly realizing their mistake, it was all too soon before they were lost. Disoriented by the dark and his own drunken panic, Cooper stumbled his way through the maze-like tunnels.

Fortunately, he did actually manage to shake his stalker, slipping down into a crevice the troll was too large to fit into. Using his phone as a flashlight, he found himself in a large grotto. He called out for his friends but the only thing he could hear was the echo of his own voice. He stumbled around, attempting to find an alternate exit to the outside but discovered something else instead. Wedged into the dirt and rock was some sort of metal device. As he got closer and brushed the dust from his eyes he could see it was actually some sort of gauntlet. Cooper attempted to pull the device free but it was stuck. He was just about to give up after one last pull when the rock suddenly gave way.

He fell back into the dirt and before he could properly look over the gauntlet, its form began to shift and change. When Cooper reached out to throw it away from him, it latched onto his arm, attaching itself to him. It lengthened and expanded and soon, Cooper’s entire right arm had been encased by the device. Panicking, Cooper found he was unable to remove it, and in this panicked state, the gauntlet hummed to life and emitted light from its grooves. Before Cooper even knew what happened, a bolt of energy was discharged from the palm of the gauntlet. It sizzled and blew a hole in the wall of the cavern. As he made his way through it, he quickly became accustomed to this new appendage. It reacted to his thoughts and after a few more blasts, Cooper emerged from the caves. His friends had followed the sounds of his blasts and managed to find their way out as well. Unfortunately, as they regrouped, more Trolls found and surrounded them. But Cooper defended himself using his new weapon and he and his friends made it home relatively unscathed.

Upon exhaustive testing and examination, experts from both DATA and SERAPH concluded the device Cooper found was alien in nature and origin. Unfortunately, they were unable to remove it. Now that he was literally armed all the time, Cooper was forced to register with the FBSA, as they designated his new cybernetic appendage as a "weapon of mass-destruction". That night in The Hollows had a profound affect on Cooper. Shaken by his brush with death, he straightened his life out. Witnessing the effects Superadine had on a person first hand, Cooper swore off drugs. He registered as a superhero shortly after that, determined to set an example for other wayward youths like himself.

An immensely powerful alien weapon. The shapeshifting device appears as a armored-gauntlet-like attachment to his right arm. Disconnected from its original extraterrestrial host many years ago, the "Omni-Fist" gauntlet fell to Earth, landing in Eastgate, the section of Paragon City now known as The Hollows. The Omni-Fist is capable of discharging powerful bursts of several types of energy. The gauntlet's standard offensive weapon are pulse rays that are fired from the palm. Blasts of concussive bolts that pick up kinetic energy along the way; the farther they travel, the harder they hit. It is also capable of emitting sonic waves, bursts of high-intensity sound that range anywhere from sixty decibels up to one hundred and thirty decibels which is equivalent to that of a jet engine.