Cherry's father did a bad thing. He got a bit too drunk at his bachelor party, and slept with the entertainment. Like many times men do this, neither he nor his friends told his bride. However, nine months later the woman knocked on his door and informed him that she had cancer, only a few months left, and that the baby girl in her arms was his. Why he believed this woman, he was never sure, but he did, or maybe it was because he felt it was penance for cheating on his wife. Either way, he told his wife what he did, and this baby girl was the result. Her name was left to her father and stepmother, so they chose to name her Cherry Olivia DeOrleans. (When she was finally informed of her true parentage, Cherry chose to have a paternity test done, and found out that her mother was correct, he is her father.)

Cherry was taken care of as a child, and that's about it. When she did good, she was not praised. When she did bad, she was punished. She could tell her "mother" pretty much hated her, and that her father was just uncaring. When she was 4 years old, her parents had another child, Lemon. Lemon was their little princess, and though Cherry had all the reason in the world to resent her little sister because of this, she didn't. All the love she didn't get from her parents, she got from her little sister.

When she turned 12, Cherry was sent to a private Catholic school where, whether it was "prostitution in her blood" or "desire for a father figure", Cherry quickly became the stereotypical naughty Catholic school girl. When her parents found out about her blatant promiscuity, she told them she was still a technical virgin, honest! They didn't believe her (and today, she thinks the whole "technical virginity" idea is stupid) and tried their best to keep their high society friends from finding out their daughter was the school whore. Then, one day when she was 14, Cherry was walking home from a football game after party when she was attacked, dragged into an alley and raped. Her rapist then slit her throat and left her for dead. As she laid their, bleeding to death she thought of all her Catholic training and realized she was going to Hell, and she cried until she fell unconscious from the blood loss. A few days later (nobody found her for those few days) she woke up and touched her neck. Other than a scar, she was alive and her throat was healed! She ran home to find out that she hadn't even been reported missing, which hurt for a bit, but then she realized she was alive when she should be dead, so that was enough for her, even if she also couldn't speak. At least her little sister was happy to see her. Cherry enrolled in sign-language classes, and after a month or two, it was obvious Cherry was pregnant. Again, caring not about Cherry but only their reputation in the community, Cherry's parents took her to a doctor willing to perform an abortion against Cherry's will and keep it quiet. However, when they administered the anesthesia to Cherry, nothing happened. At first the doctor was not willing to perform the abortion without anesthesia, but Cherry's "mother" slipped him an obscene amount of money, and he did. For the first and only time in her life, Cherry became violent, trying to stop the doctor. But, being a 14 year old girl vs. two men and an adult woman, she lost the fight. The abortion was botched from it being forced upon an un-sedated and unwilling patient, and after actually falling unconscious for a time afterward, Cherry was sterile. After that, Cherry became even more promiscuous, even to the point of bisexuality (which she'd always been curious about... but never actually tried). By that point, her parents gave up on trying to cover up her actions, and just told their friends she was a horrible girl, and they were very ashamed of her. Also, after this incident, she decided there was no God, no Heaven, no Hell. However, as she realizes that people need their faith to not fear death, she usually uses her Catholic school training to pretend to believe, especially with dying children.

When she turned 18, Cherry left New Orleans, moving to Lawrence, KS. She enrolled at KU in pre-med with the desire to be a gynecologist eventually, but doing some volunteer candy-striper work, she realized her heart was in nursing.

A Note on her powers

Cherry is an Empathic Healer in the sense that she takes on the wounds of others. Her faster than normal healing allows her to do this with all but the most deadly wounds.

Cherry is a pacifist. She heals others, she does not hurt them. So, on the rare occasions she actually uses her Psionic Blast powerset, it is roleplayed as all sleep powers. No actual damage or pain is suffered by the enemies.

Cherry is also telepathic, which she developed after she became mute from having her throat slit. Also, as part of her personal healing, she is immune to disease, poison, etc (hence why the anesthesia didn't work on her). She can however choose to "turn off" her healing and be affected, like if she actually wants to get drunk.

Each of Cherry's alternate costumes are various "fetish" outfits that she uses at the club she works at. She's got a Sexy Teacher, Catgirl, Naughty Nurse, and a Playboy Bunny (this one she doesn't wear at the club, it's just me, I had to give her a playboy bunny outfit for fun, though grrr no bow tie without a shirt, so that's the only thing missing is her bow tie). 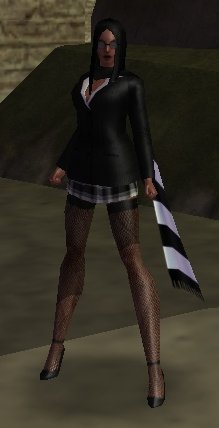 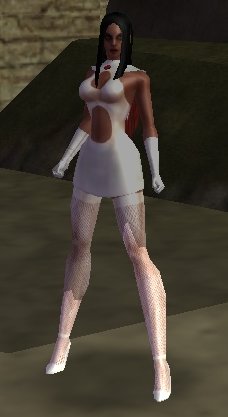