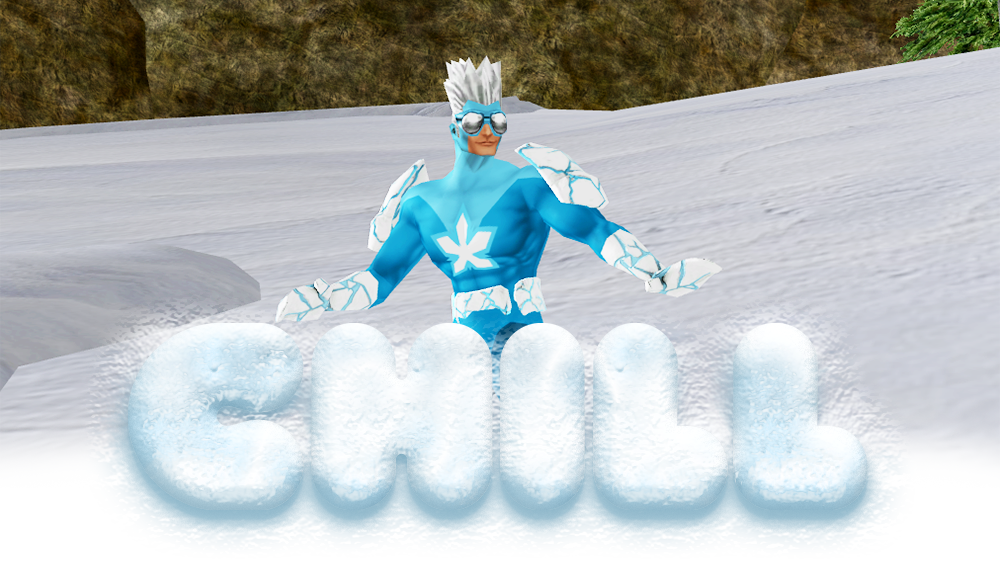 
ABILITIES: Ability to form a protective coating of extremely durable ice around his body.

The year was 1976. Born one month early, Donnie Hopkins was given a thirty percent chance to survive. But, against all expections, Donnie managed to beat the odds. However, he was diagnosed with a rare genetic birth defect which dramatically weakened his immune system and left him incredibly susceptible to infections.

A frail and sickly child, even the slightest bit of bacteria caused him to become deathly ill. Donnie was confined to his home, which his parents had retrofitted into a state-of-the-art clean house, at all times. Home-schooled and kept away from other children, Donnie led a lonely life as a child, which did not go unnoticed by his parents. Often sullen and depressed inside his pristine prison, Donnie’s only enjoyment came from watching television and playing video games.

Unable to watch their son grow up unhappily, his parents searched for a cure. Treatment after treatment failed however, and since Donnie’s cancer was so rare, the amount of doctors working to develop a cure was relatively low.

But one day, out of the blue, the Hopkins family were approached a man. A doctor who’d spent the last decade rsearching and studying the cancer and how to counteract it. Donnie's case was brought to his attention and he proposed an experimental treatment that consisted of a series of injections over the course of one year. Donnie's parents were apprehensive initially, but after some research they agreed.

One year later, their prayers were answered. Donnie had gone into remission. Strong and healthy for the first time in his life, eleven-year-old Donnie took his first steps outside. And nothing happened. Ecstatic that he was now “normal” , Donnie embraced the world with open arms. Public school and a healthy social life followed in the years to come.

But tragedy struck ten years later when Donnie’s parents were killed in a plane crash. Alone for the first time in his life, Donnie’s luck worsened even further when he collapsed outside of his apartment. Rushed to the hospital, it was discovered that his cancer had returned. Only it wasn’t just attacking his immune system. His organs were failing. He was given six months to live and since the elderly doctor who’d treated him as a child (the only one in the world with any type of experience with his condition) had long since passed away, Donnie’s odds at cheating death a third time were incredibly slim. A month before his expiration date however, Dr. Janice Cooper, an old acquaintance of his mother’s, visited and presented him with an offer he couldn’t refuse.

Dr. Cooper and her husband William were experts in the field of cryogenics. She proposed they place Donnie in cryogenic stasis, while they worked to find a cure for his condition. Though their initial tests with cryo-stasis were somewhat successful, they were still years away from human trials. But as his mother was a dear friend of hers, she was prepared to circumvent the traditional safety precautions if there was even the slightest chance she could save his life. Figuring that he was going to die anyways, Donnie had nothing left to lose. He accepted.

The husband and wife duo carried out the highly illegal procedure in secret, in a private bunker they owned. Donnie was inserted into a pod and cryogenically frozen. His vital signs stable, Dr. Cooper and her husband had done it. Now came the hard part. Finding a cure for Donnie’s condition.

The pair of scientists were unable to achieve any sort of progress in curing Donnie’s cancer. And when Janice herself contracted brain cancer from exposure to faulty lab equipment, William turned his attention on saving his wife rather than Donnie. He was unsuccessful in replicating the conditions that led to Donnie’s stasis however. After his wife died, William attempted to sue the company he viewed as responsible for her death. He was killed in a car bombing a few weeks later. With no one to monitor it or even knowing of its existence, Donnie’s pod was left abandoned and forgotten about.

A battle above ground between a hero and his nemesis brought about a power surge in the city’s electrical grid, causing the generator powering Donnie's cryo-pod to short out. The pod was overloaded with absolute-zero energy before shutting down and forcibly thawing Donnie. Stumbling above ground, a groggy and unfocused Donnie was caught between the hero and villain. When the villain attempted to take Donnie hostage, he was frozen solid. Donnie was hailed as a hero.

Discovering he’d been frozen for just over two decades, Donnie was amazed to find his cancer had been eliminated. Not only that, but he’d gained superhuman abilities as well. As he practiced and eventually learnt to control these abilities, he decided to use them to protect and defend the innocent and become a superhero.

Thermokinesis: Chill possesses the ability to lower both his external and internal body temperature, which projects intense coldness from his body. He his able to project blasts of cold air strong enough to knock his enemies off their feet and several yards away.

» Cold Immunity: A side-effect of his ability has rendered his body tissue unaffected by sub-zero temperatures.

Cryokinesis: Chill possesses the power to instantly decrease the temperature of ambient water vapor in his immediate environment to below zero degrees Celsius, thereby freezing it into ice. This ice can be formed into any object of his choosing: including projectiles, swords, shields, or clubs. The only limitations are his own imagination and the ambient air temperature which determines how long his ice sculptures will stay frozen.

» Ice Armor: Upon further training in the use of his abilities, Donnie found he was able to form a crystalline protective armor made of solid ice around his body when using his powers, which affords him some degree of protection against concussive force, projectiles and other weapons.

Having faced death and come out on top in three separate occasions left Donnie with a thrill-seeking, devil-may-care attitude as he takes every opportunity to live life to its fullest. Though he’s fearless in the face of danger, Donnie frequently finds himself in hot water when his daredevil-like behavior gets him in over his head.
Retrieved from "http://www.virtueverse.net/wiki/Chill"
Categories: Character | Everlasting | Hero | Dominator | Science