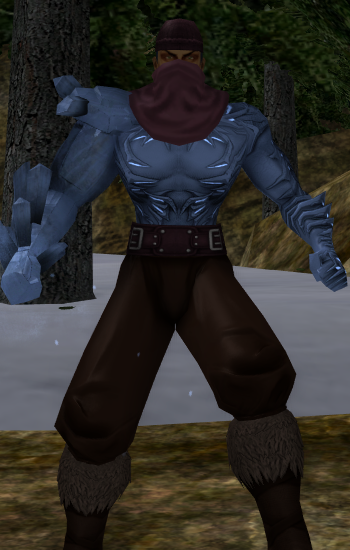 The peak of Mount Kailash has always been shrouded in a veil of snow. The high summit towers above the Gangdisi Mountains on the Tibetan Plateau. According to public record, it remains unclimbed, unexplored, and completely uninhabited. That is a lie, however. Nestled among frozen sediment atop Mount Kailash is a hidden village called Gaanv Kailash -- a society of disfigured humans that were exiled decades ago. In 1951, after the Chinese government began an invasion in an attempt to exert control and occupy Tibet, they encountered a number of people developing a strange genetic mutation. Parts of their skin were hardened and stone-like. In order to stop the spread of what they thought could be a harmful defect, these mutants were rounded up and exiled to live on Mount Kailash. Though it was spun as an act that would bring 'the afflicted closer to the gods,' (as the mountain had religious significance) it was effectively intended to be a death sentence.

No one expected the exiles to survive in the cold environment of Mount Kailash -- and though many died on their path to the peak, the initial settlers were enough to sustain a new generation. Every member of the community carried the Mountain Mark, their word for the mutation that put them there. Exposure to the elements exacerbated the condition in some people, turning more of their body into malformed rock. The transformation robbed some of their sanity, and conflict broke out between those who still wanted a civilized life, and those who opted to instead rely on feral instinct. These trials made life on the mountain a constant fight for survival, and yet against all odds, Gaanv Kailash refused to fall into ruin.

Generations later, Voss Kailash, an able-bodied youth in the village, asserted himself as a leader to his people. He captained hunting parties, logged trees, and built entire structures on his own. This selfless behavior earned him respect from the elders -- as well as gratitude from his peers. But Voss' goals were not purely altruistic. After his parents were lost during an avalanche, Voss harbored an anger towards the perceived weakness of his society. For too long they considered themselves victims of their circumstances -- instead of agents for change. Voss used his position in the community to gain control. The previously group-led village was amicable to his idea: a new role -- the Village Protector. Voss Kailash would be the first to fill those shoes.

As Village Protector, Voss turned the exiles of Gaanv Kailash towards thinking of the outside world. He blamed them for everything from tainted wildlife to rising temperatures. For the first time in years, individuals began to come down off the mountain to not just forage for food, but to spy as well. What they reported back disgusted Voss. Sacred mountain ranges like the Gangdisi and Himalayas were being desecrated and polluted. Trespassing tourists were being led to their peaks in exchange for monetary sums. These problems seemed to extend beyond just their region as well: suffering plagued the planet. The world that deemed Voss and his kind 'unfit' to be a part of it appeared unfit to even care for itself.

No longer content to just hide, Voss Kailash made a solemn oath to ensure Mount Kailash would not fall to catastrophe caused by the frivolity of outsiders -- by any means necessary. Voss started using his superior mutant power to raid food and supplies from the modern world. Branded a criminal, he embraced this new infamy, and reveled in crushing those he now viewed to be from an inferior species. His jagged, icy growths made him known and feared as The Crag, a living mountain.

Joining the ranks of supercriminals everywhere alerted the Crag to the presence of many others like him who wielded immense power beyond normal human means. A special disdain in his heart was reserved for them, as he claimed they were fools for not enforcing their will upon humanity. Truthfully, he had another reason to hate them -- a fear of his own. In his village, no one could challenge Voss for dominance, and he assumed the same was true of the outside world. The realization that others wielded mighty gifts akin to his left him vulnerable -- which meant Gaanv Kailash was vulnerable too. If his village were to fall to one of these superpowered strangers, or if it was destroyed by untold chaos that they wrought, Voss would be an utter failure. Such an outcome could not be allowed to happen. His duty as Village Protector was to prevent that at all costs, and nothing would get in his way of doing so.