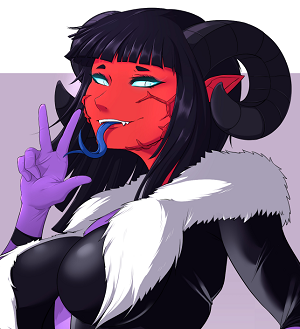 Makani is a half-devil related to the Eidolon strand of demons. She later became known as the junior hero known as Psy Kick, who eventually went missing after involving herself in a case against a group of cyborg cultists known as the Benevolent Church of Nyx. She later emerged as the vigilante known as 'Devil Horns' in the Rogue Isles, having awakened to her demonic heritage as a half-devil. She now serves as a menacing protector in the isles.

Origins + Life with the Wardens

When a powerful Fortunata Mistress gave birth to a half-demon child thanks to Dranoth, she expected to keep it and offer it as a gift to her Lord Recluse as a powerful potential psychic. Unfortunately for her, Dranoth had other plans. He kidnapped the child upon birth and escaped from the Arachnos facility, taking the child to the Wardens of Babylon headquarters located in Iceland, where he gave the child to the highly regarded Deacon King to look after. The Wardens of Babylon are a paramilitary mage group that originated as a splinter cell to the one and only Knights Templar. Deacon King never meant to become the Van Hellsing-esque archetype he is now. It wasn't until the fateful day as a young boyscout that some sort of cryptid mothman creature dragged him into the forest and mauled him. Luckily, he survived thanks to having a 'Tieing-a-knot' badge he used to strangle the cryptid to death. Unfortunately, there's no cryptid strangling badge. When he opened up to the vast world of secrets before him, he found he couldn't live a normal life. He spent years dedicating himself to not only fighting but understanding monsters and allowing them to adapt so they do not need to be slain. He was later recruited by The Wardens of Babylon, where he became the adoptive father of many monster children. You ever play Mario Kart with seven demon children? He played it a lot with his new daughter - his daughter he named 'Makani'. 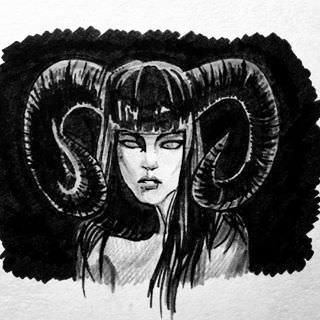 Makani grew up in the Wardens of Babylon compound with limited contact with the outside world. She would sometimes be taken to town while wearing a hood and baggy clothing, but her demonic origins were kept very much a secret. She was raised alongside many other half demons and given a home school life as well as the regular birthday party events and Christmas, Hanukkah, and Kwanza. She became the closest child to Deacon after spending a lot of time with him and learning all about his favorite hobbies, which included listening to music and playing video games. She was a natural at video games, and Deacon admired that. Though he didn't admire that as much as he admired her kind, giving heart.

Makani's seer ability made her useful as a beacon and anchor to connect to and traverse other realms without using physical manpower. Because of this process being rather taxing on Makani, Deacon made sure she was never pushed beyond what she found comfortable. To the ire of some, not much progress was made. Makani always tried to make it a little further each time to make Deacon proud, but he only cared about her well being.

When Makani turned fifteen, things changed. Deacon never returned from what turned out to be a suicide mission against a powerful magical entity and a new boss took over the Wardens, who had no regard for the half demons living there nor saw them as humans. He pushed Makani constantly and she eventually was in danger of her mind permanently collapsing. She went into a several day severance from her body where her physical mind was trapped in a world called the Fae Underground, a realm that physically encompasses the human tie to the fae. She was saved and protected by a changeling named 'Richter' and his crew, who helped her find her way back into her conscious body.

Makani, having come to, refused any further tests and was punished accordingly by being locked in a cell. She was released from her cell that same night by some other Wardens, who found her punishment unjust. They told her that she has no place in the Wardens anymore and that she needs to flee. When Makani asked where, she was given a boat ticket to Paragon City. She was told to seek out a specific person by the name of Scott MacNeal, who would take care of her. When she asked about her fellow demons, she was informed they will be taken care of - but she needs to spread the word: The Wardens have been compromised.

Makani had a lot to think about on the boat ride over, and quite a few quiet tears to shed. Her cheeks were at least dry by the time she reached the Americas.

Scott and Linden O'Neil were at the docks to meet Makani, who took her home and fed her and provided her with her own room while she adjusted to her new surroundings. She enjoyed her time with the two visiting the sites around Paragon and taking in the views, both beautiful and strange.

The Rise and Fall of Psy Kick

Over the years, Makani had the misfortune of witnessing many of the horrors that plague Paragon City. From superhuman to super mundane, such as poverty. She had a puppy love summer relationship with a teenage gangster by the name of 'Punch Out', who is best described as a bully who bullies bullies. She had open infatuation with his confidence and strength. He got her her start on fighting for herself, both physically and verbally, and helped her regain the confidence she lost when Deacon died. They grew intimately close for a short while before some form of dispute temporarily drove them apart, but they reconnected as friends at the very least, and the desire to love and protect one another has not lessened any. Punch Out and Makani protected Kings Row from crime and reckless street heroes to protect the homeless for quite some time before Makani left to register as a hero officially at age seventeen, where she became known as the hero Psy Kick. She felt her status as an official hero would give her a proper voice to the people her and Finn (Punch Out) were protecting. While she wasn't wrong, the hero gig would eventually lead to all sorts of new problems.

Her hero group, The Guardians, was not listed on the official roster, therefore it did not receive official backing from any hero groups. And those who showed initial interest would eventually peter off and feel it's not worth it. Because of this, the group often bit more off than it could chew, such as dealing with assassins and sometimes awakening a lesser magical horror. Makani spent most of her time in the Guardians associated with the junior hero known as Spellcaster and his Praetorian Hexblaster. Eventually, Finn joined the Guardians, too, if only to keep an eye on Makani. 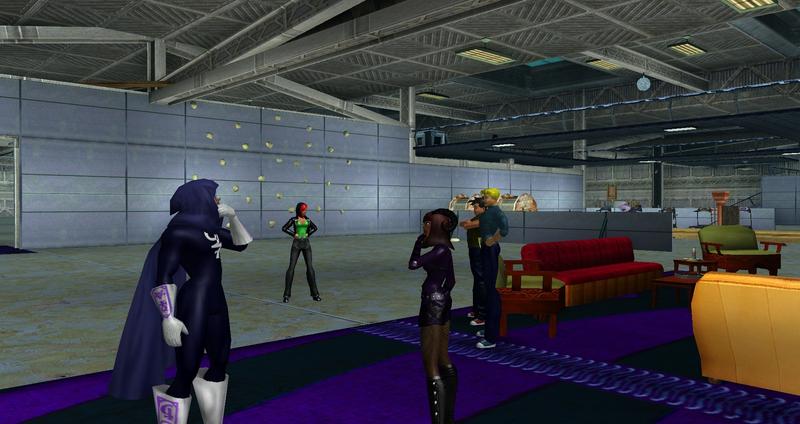 She fought alongside the Guardians for several long months until she got involved with a case to investigate some strange disappearances around Paragon (and apparently even the isles). The culprit behind these disappearances was a group of cybercultists known as the Benevolent Church of Nyx. Their primary objective seems to be to kidnap and augment people of interest in order to "reprogram" their faith towards a dead pantheon goddess, whom they intend to trap inside a machine vessel and control. They gain influence through parties and the media outlets they have the ability to influence.

Makani infiltrated one of their parties, but stuck out like a sore thumb. Having been one of the highest performing members of the Guardians, she overestimated herself and was dragged into a private room and nearly beaten to death. While fighting for an inch of her life to hang onto, something snapped inside of her, and she went berserk, tearing each of the men in the room limb from limb and feasting on their bodies, blood, and even souls. When she came to after passing out in a pool of blood, she could hear distant police sirens, and knew that she had to disappear. She couldn't be caught like this. She fled to the isles to start anew there, returning to her life of aiding the homeless, but this time under a cloak and cowl appearance. She only ever returned to aid the Guardians in one final mission against the villainous Anti-Mage of the Sinister Squad.

Having grown cocky in her pursuits against the Squad, Makani spent her time in the isles taunting them until she fully gained their attention, which ended, least to say, a mistake on her part. She was beaten again to an inch of her life and recovered by the vigilante known as Dead Zone, or Rizzo, who showed her the ropes of operating in the isles and toughened her up. Having joined forces with Dead Zone, Makani learned to embrace her powers and learn all over again to love herself through the continued support of allies such as Dead Zone and the rest of the Battle Ready Organization and the redeemed assassin known as Sideswipe. By growing comfortable with her demonic origins, she took up a new mantle as Devil Horns, the demon terror of Etoile. 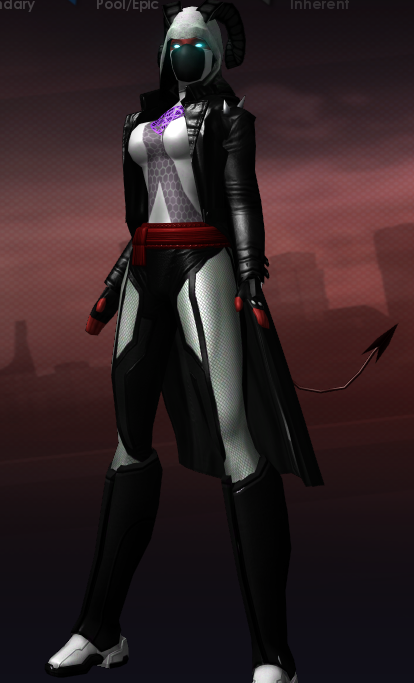 Makani's starting gear in the isles consisted of the long coat she inherited from Deacon, a mysterious demonic greatsword she woke up with, and an enchanted chain she wrapped around her right arm in order to channel her spiritual power into devil beams from her arm. The greatsword eventually broke in another skirmish with the Church of Nyx. She no longer requires the use of the chains to channel her power, and still uses the long coat to this day.

She was eventually approached by the Shattered Seven, to which she's among their ranks still today.

Makani practices a form of mixed martial arts she learned from various teachers such as; Deacon, Punch Out, Dead Zone, Web, Sideswipe, and Jun Long. Because of this, she is able to 'shadowbox' with her enemies and adapt to various fighting styles. While she fights like a human, she still draws from her demonic power. Like the trees her ancestors spawned from, her body is able to adapt to various environments and she's naturally immune to toxins. She is able to mutate her right arm into a devilish tendril and cleave chunks out of her enemy and immediately integrate it as energy for her body. (Basically, she can drink someone through her arm if she really wants to).

She is able to run along wind currents for a boost, though she is not up to par with most speedsters. She has the ability to eat and digest just about anything, for better or worse, though she requires bio-matter in order to regenerate her wounds.