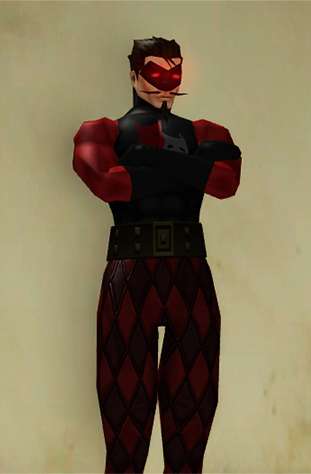 Born and raised in Brooklyn, New York, Leonardo Paige was lucky enough to discover he possessed the metahuman gene in the safety of his own home, away from the eyes of the frightened strangers so many other metahumans were forced to deal with. When he accidentally slashed his wrist with a knife while cooking dinner, he was stunned as he watched the wound heal within a minute.

In the days following, Leo found himself feeling faster, stronger and more agile. After discovering his abilities he withheld from competing in any sports in high school as whether he performed a little "too good" or he unintentionally hurt someone, there's a good chance his status a metahuman might be revealed. Instead, he got into drama and after graduating, went on to become an actor. A stage actor, specifically.

"I happened to come into some money out of the blue so I decided to take a vacation. Now I could've gone to Madrid or Bora Bora or someplace like that but I had some friends who'd just come back from Paragon City and they couldn't stop raving about it."

Paragon City was everything he'd hoped it would be and more. He spent a week sightseeing, eventually ending up at the renowned Copper Crown Theater in Kings Row, one of the riskier parts of the city. And that was where he met Alexandra Cooper, the love of his life. She was the leading lady in the theater's latest show, Othello and Leo instantly fell in love. He worked up the nerve to ask her to dinner after one her shows and that was that. The two just clicked.

As a stage actor himself, Leo eventually managed to become a regular member of the theater's ensemble. Leo was doing what he loved as well as working alongside his girlfriend every week. Everything was swinging his way.

And then Reinaldo Lara came around.

Lara was a notoriously arrogant and hard-to-work-with actor, who achieved most of what he had accomplished through bullying and coercion. It was even rumored a cousin of his had mob ties. So when Reinaldo was brought on board there was nothing much everyone else could do but grin and bare it, including Leo.

Until he started flirting with Alexandra, anyways.

"This guy comes to me and he says 'I'm going to take your girl' and there's nothing I could do about it. I mean, are you kidding me?

Reinaldo not-so-subtly suggested something bad would happen to Leo if he didn't break it off with Alexandra and leave the city. Leo promptly laughed in his face. But sure enough, he got jumped while out picking up groceries that night. His attackers left him bloody and beaten in an alley.

So you can imagine Reinaldo's surprise when Leo turned up at the theater the next day, as healthy as he'd been the day before. He let Reinaldo know that he knew he was behind his mugging but Reinaldo played dumb. They tried running me down in one of their SUVs but Leo managed to jump out its path in time. The woman who'd been standing next to him wasn't so lucky. In trying to kill Leo, Reinaldo and his goons had killed in innocent bystander.

"I blamed myself for not being able to save her. But eventually I realized it wasn't my fault. It was everyone who'd ever let guys like Reinaldo get away with whatever they wanted. Everyone who never stood up to scum like him. Someone had to. Why not me?"

For a month Leo followed Reinaldo in an attempt to catch him in some kind of illegal activity. One night he got lucky and caught him in the middle of some kind of large scale drug deal. He beat them all down. Albeit, clumsily.

"I can't remember how many times I got shot that night but I hadn't felt that exhilarated since the first time I stepped foot on a stage. I put the fear of god into Reinaldo and his thugs. He confessed that night. I made sure Reinaldo wasn't hitting Broadway anytime soon."

It all just made sense to him after that. Someone needed to punish the guilty. When he wasn't on stage performing at night, he was out fighting crime.

Powers:
Accelerated Healing: Leo's primary ability is his superhuman healing factor that enables him to regenerate damaged or destroyed tissue with far greater efficiency than that of an ordinary human. Leo is able to heal from injuries such as cuts and abrasions, puncture wounds, bullet wounds, broken bones, and severe burns within moments.

Enhanced Stamina: Leo's cardiovascular, respiratory, and metabolic systems are far more efficient than a baseline human. His body generates virtually no fatigue poisons, allowing him to physically exert himself for far longer than an average person.

Skilled Acrobat: As a natural athlete, Leo possesses a superior level of agility, balance, and coordination. Combined with training as an aerialist and acrobat, Leo is capable of doing numerous complex acrobatic maneuvers in combat scenarios.