Dynamo-Man was originally created by Tom (player) on the Victory Server, but was re-created on Virtue in order to be able to team with the many members of CoHGuru.com forums. Dynamo-Man's main influences include The Thing, Colossus, Superman, Luke Cage and Mr. Incredible.

Dynamo-Man is a jovial giant, always eager to lend a helping hand. He thoroughly enjoys being a super hero. He is also an insatiable flirt, often targeting those female supers with whom he has no chance. But it's all in fun for him, and when the chips are down, he backs his allies to the fullest.

Dynamo-Man in action.
Joe Steinbeck was an orphan who grew up in St. Christopher’s School for Children, located in Seacoast City, California. After graduating high school, he moved to Pittsburgh Pennsylvania, where he attended college for four years, earning a BA in History. After graduation, he spent two years taking graduate courses in Archaeology, Psychology and various foreign languages. He wasn't sure where he was going with it. But he loved the process of learning, and initially had hoped to become a real-life Indiana Jones. However, eventually his money ran out, and he couldn't get any more grants, so he dropped out of school for good. After college, for reasons unknown, he took to the roads, wandering the countryside, working odd jobs for cash. He managed to hitchhike across most of the southern states and was making his way back through the Midwest when a life-altering event happened.

It was late one night, and Joe was trying to make it to the next town before collapsing from exhaustion. As he slogged along an empty back road, an extra-terrestrial craft of heretofore unknown origins crashed in a field nearby. After recovering from the shock wave of the explosion made by the ship's impact, Joe ventured close to investigate. He was surprised to find that the sole occupant of the craft had survived. The alien saw Joe, and something akin to recognition passed across his alien features, and it immediately bombarded Joe with mental images in an attempt to communicate with him. The images were of war and destruction, but the landscape was not Earth. Joe got the feeling that the alien was giving him a warning. This could be Earth's fate if it wasn't stopped in time. The alien then produced a small device and bathed Joe in a strange radiation. It was to be the alien’s last action. But before he passed, he imparted on Joe the knowledge that he and many other people on Earth had been visited in the past, and infused with a genetically engineered “organ” that spread itself along the nervous system, and became dormant. This membrane is virtually undetectable to Earth medical equipment, and only becomes active when exposed to a specific type of radiation. Joe also got the feeling that the result of the activation of this organ was potentially different for each person. He realized then that this alien landed here on purpose, and that it had been seeking Joe in particular. It was one of the last of it's race, and with it's dying act, it meant to give Earth a chance to save itself from the fate of his own world.

As this all was becoming clear, Joe’s body began to alter. The organ caused his muscles to grow substantially, and it created an energy field around his body as thin as a layer of skin, but resilient as steel. The organ itself seemed to generate an endless supply of energy that powered his newfound abilities.

On a whim, he searched through the alien spacecraft for anything useful. What he found was a spare red and blue "spacesuit." As he was taking that he noticed a timer in the cockpit was counting down. Not sure what it was, Joe hurriedly put some distance between himself and the craft, which dematerialized shortly after, leaving nothing but a smoking crater.

Joe had heard of Paragon City, and had always wanted to visit. Now that he had superpowers, he felt compelled to go there, and do his part. Based on the organ being a sort of "living battery" Joe took the moniker Dynamo-Man, and registered as a hero within days of arriving.

Super Strength - As a result of the field generated by the spinal membrane, Dynamo-Man possesses superhuman strength, enabling him to lift overhead approximately 75 tons, under optimal conditions.

Invulnerability - Dynamo-Man possesses a high degree of durability and invulnerability to physical harm. Additionally, his resistance to damage can be greatly increased when he concentrates.

Flight - By focusing the energy that fuels his powers, Dynamo-Man is able to fly at high speeds, and with great maneuverability.

Energy Mastery - Recently, Joe has also developed the ability to focus the energy his body produces, and project it in a concussive force, as well as an almost laser-like beam from his eyes.

Dynamo-Man has been trained in hand-to-hand combat by Masked-Revenger, and has developed a unique fighting style which effectively utilizes his great strength and durability to his advantage.

As a youth, Joe spent a lot of time doodling in class. Subsequently, he is a talented artist (though not so much as to be a professional). He also has a healthy interest in History, Archeology, foreign and ancient languages, and Mythology. He can often be found researching those subjects at his leisure.

As a result of his heroic activities, and his inquisitive mind, Joe possesses a keen wit and attention to detail, making him a somewhat capable detective as well. 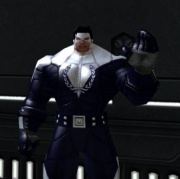 Dynamo-Man sports his Dawn Patrol colors.
Although Dynamo-Man has been seen around Paragon City for a long time now, he has yet to develop a particular feud with any specific group or villain (though he does seem to have it out for The Council). Rather he dips his heroic hand into any pot that needs stirring. Dynamo-Man often finds himself either going it solo, partnering with the heroine known as Diana Cutthroat (with whom it is rumored he also shares a semi-romantic relationship), or teaming up with members of various other groups, such as The Dawn Patrol. He recently accepted an invitation to join them as a member.

In the past Dynamo-Man has teamed with many other heroes. He had once formed a very close friendship with Masked-Revenger and the two fought as a team for a long time. But as their goals and lives began to diverge, they stopped teaming up on a regular basis. Yet they remain close friends, and often call on each other for aid in special circumstances.

As a member of The Dawn Patrol Dynamo-Man has fought alongside many heroes from many origins and places in life. He has developed a strong relationship with his newfound comrades, and often answers their call to arms whenever he is able.

A recent development has taken center stage in Joe's life. With the return of the Rikti, changes have come over his body, possibly as a result of further exposure to alien radiation. For a short period, Joe was forced to wear an armored enviro-suit that he designed with the help of the Vanguard.

But not all of his adventures have been dire. At one point, Joe was hurtled back in time to ancient Greece, where he suffered from amnesia, and was mistaken for Hercules. Naturally the real Hercules showed up to confront the "pretender," and an epic tussle ensued. In the end, Joe regained his memory, and was spared, and even befriended, by the Greek demigod, and sent back to his own time by Zeus.

A "Phantom Menace" of his own

Recently, Joe has become aware that many of his adventures and foes may not have been the random encounters he thought them to be. After interrogating a recent Malta operative, Joe learned that there is a person or entity that may have been pulling his strings all along. He believes it to be related to the alien "invasion" he was warned about in the visions imparted on him when he first gained his powers. He suspects now that such an invasion may not be a race of aliens, but a single, highly powerful, invader who has, for as-yet unknown reasons, focused his energies on Joe's destruction.

Dynamo-Kid
Through careful investigation and research, Dynamo-Man has located a few others who were subjected to the same genetic manipulation and radioactive bombardment as he was. Most notably is Sarah Adams, aka Dynamo-Kid. Dynamo-Man had been investigating a lead on some strange weaponry being used by some members of The Lost. Sarah and her mother were attacked by members of that group, one of which held a strange "gun" unlike the Rikti weapons they often carry. This device bathed Sarah in the same radiation that Dynamo-Man had been subjected to, causing the dormant membrane in her body to activate. The Dynamo Effect caused her body to accelerate in many ways. Specifically, her metabolism is highly refined, granting her superhuman regenerative powers. Additionally, her muscular reflexes have been altered to the point of granting her Super Speed abilities. With the help of D-Man, whom she had always admired, they were able to defeat the Lost handily. Sarah had been a practitioner of the martial arts since she was very young, and after her powers emerged, she donned a costume similar to Dynamo-Man's, and began trying to fight crime herself. He later took Sarah under his wing and guided her into becoming a hero. She has since joined a group of teen heroes known as the Sidekick Squad. However, this team has recently fallen off the radar due to some personal crises within the ranks.

Others have also displayed powers derived from the Dynamo Effect, but none have come forward to register as heroes as of yet.

Note: If anyone wishes to incorporate The Dynamo Effect into their own character's origin, feel free to do so. Please let me know that you are using it, so I can enter your character's name here. And you can link to this page in your Wiki.