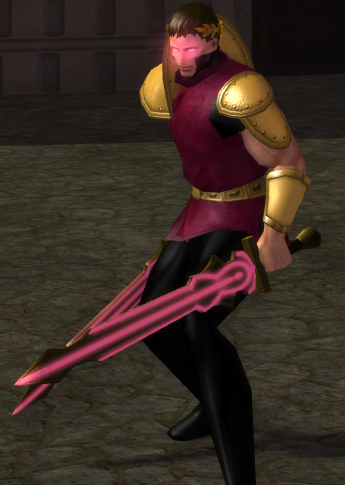 NAME:
Raziel, All-High Guardian of Genesis and Enforcer of Elysium
AGE:
Damn OldTM
POWERS:
Wields the power of Genesis, a wellspring of creation magic that powers his homeworld and allows Elysians to craft spells directly from imagination.
ABILITIES:
Trained from birth in many forms of combat, although his specialty is the use of twin blades and close-quarters spellcasting.
EQUIPMENT:
Twin swords named Demiourgia ("creation") and Seira ("order") that are capable of channeling Genesis magic for empowerment.

On a mystical plane parallel to Earth's home dimension lies the realm of Elysium, which exists as a paradise afterlife for gods and warriors across all of reality. While most of Elysium's inhabitants are the deceased, there are beings native to the realm who are tasked with maintaining the eternal peace of the afterlife.

These Elysians, the native children of Elysium, live in a society that exists entirely behind the scenes of the Elysium paradise. The dead who live there are blissfully unaware of what it takes to keep Elysium running. The Elysians' entire culture revolves around perpetuating Elysium throughout eternity, and every Elysian is given a unique role to fill in the overall production and execution of paradise.

Most Elysians never leave the realm, but there are some who are tasked with special assignments and are sent throughout the universe in the name of Elysium. Raziel, All-High Guardian of Genesis and Enforcer of Elysium, is one of the few Elysians able to explore beyond the Elysian fields. As an Enforcer of Elysium, Raziel is the equivalent of an intergalactic cop. He was chosen and trained from a young age to fight back the tide of evil throughout the universe and ensure that nothing from outside the realm causes harm to Elysium.

Fueling the impossibilities of an eternal afterlife is something the Elysians call Genesis, which is a wellspring of creation magic that sits in the heart of the realm. Without Genesis, there is no Elysium, and so the Elysians expend a lot of manpower making sure that the flow Genesis remains protected.

Genesis, when properly harnessed, has a lot of interesting applications. While Genesis is capable of mimicking the magic of Earth, it is not a form of magic that non-Elysians are capable of utilizing for themselves. As raw creation magic, Genesis is able to manipulate reality in ways limited only by the imagination of the Elysian who is wielding it. All Elysians are naturally able to tap into Genesis and they all use it regularly throughout their work.

For Raziel, Genesis is primarily a means of travel and a form of proactive defense he uses in combat, although he is capable of using it for much more. As a Guardian of Genesis, he is a master manipulating Genesis and understanding its potential. Genesis is a part of him, so to Raz, using it is almost like a reflex.

Genesis' entire existence hinges on a delicate balance between the cosmic forces of good and evil that exists throughout the universe. When reality descends too far into chaos, the power of Genesis weakens. Eventually, chaos will bring about the destruction of Genesis if left unchecked. When the universe is falling into darkness, Elysium sends its Enforcers out into the universe on a mission to fight on the side of good and reestablish order where chaos has taken control. This is the mission that has brought Raziel to Earth, a world that has been a hotbed of destruction for years.