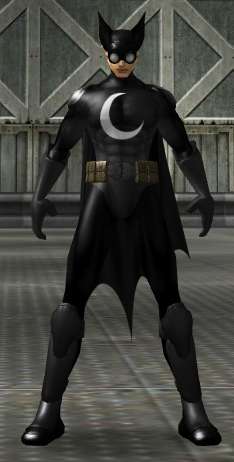 Born to two straight-laced, no-nonsense investment bankers in a small, nondescript town in middle America, Reilly Parker was a fairly ordinary teenager. A bit more rebellious than most, if only because his parents kept him on a tight leash. Much to their dismay, he found his passion in music in high school, forming a punk band called The Black Bats with a few friends. Being the lead singer in a band was not what they had in mind when they suggested he ‘find a hobby’. Early on his parents attempted to stifle his interest in his newfound passion by suggesting it was a waste of time, but he would not be deterred as they lined up gigs around town on the weekends. And when they put their foot down and actually forbid him from performing? He simply snuck out off into the night.

In his junior year of high school he made up his mind - his dream was to become musician. His parents insisted it was just that; a dream, and that any attempt in chasing that dream would only lead to disappointment and time wasted. He’d be better off focusing on achieving something actually attainable. Their mantra was ‘Do what pays well, even if you don’t enjoy it’. Reilly just couldn’t get down with that.

Perhaps he should have though.

During what would definitively be The Black Bats’ last performance, Reilly’s metahuman abilities first manifested. He produced an ear-splitting ultrasonic scream that shattered all the glass in the building and ended up causing temporary hearing-loss to nearly every person in attendance. It was truly a performance no one would ever forget.

News spread fast in the small town. Reilly was treated as an outcast by nearly after that. His bandmates kicked him out, furious that he had ruined the their reputation. Out of peer pressure, the rest of his friends distanced themselves from him and eventually just stopped talking to him altogether. No one tried bullying him, however. The threat of permanent deafness put a kibosh on that. No, the rest of his school’s population treated him more like a leper, quarantining and completely refraining from interacting with him.

And though he parents insisted they still loved him, he noticed they looked at him differently. Quick glances between the two of them whenever Reilly would get the slightest bit upset. The hushed whispers he’d hear whenever he left the room. He could tell they were trying their hardest not to show it, but they feared him.

Luckily for Reilly, he was able to keep his abilities in check, never really losing control. But that didn’t stop him from getting kicked out of school when “concerned parents” petitioned for his expulsion, arguing that his presence was a threat to the safety of the faculty and their children. The school board caved to the pressure and two weeks into his senior year, Reilly found himself without a future.

A day later his parents sat him down to talk. Refusing to uproot the family and leave their jobs behind, they’d decided to send him away to someplace he’d be more accepted. Not permanently, they promised. Just to finish out the school year. They were sending him to Paragon City to live with his aunt Eliza, the free-spirited, bohemian black sheep of the family.

Truthfully, Reilly had always gotten along better with his aunt than his parents. With a large bush of kinky auburn hair and round glasses too big for her face, she was a bit eccentric, but clearly good-at-heart. Though he only got to spend time with her at family get-togethers and whatnot, she was the one who encouraged his artistic endeavors and insisted he pursue whatever dreams he dreamed.

At first, Reilly was angry at the world. He hated his parents for pushing him away when he needed them most and his friends for doing the same. He hated himself for being a freak. He took up kickboxing as a means to channel his aggression.

On his way home one night after a sparring session he came across a woman being mugged. He chased away her attacker down an alley and when he pulled a knife on him, Reilly accidentally unleashed his sonic scream, knocking the thug off his feet and disorienting him long enough for him to be apprehended. Reilly felt a rush like no other and had an epiphany. He realized he'd been wasting time being angry at the world instead of attempting to fix it.

Sonic Scream: Flock is a metahuman that possesses the ability to vibrate his vocal chords over a wide range of sonic frequencies and produce a volume of sound ranging up to at least 200 decibels. This ultrasonic scream allows him to project incredibly loud and destructive vibrations whenever he screams, allowing him to severely damage both organic and inorganic objects. His screams are powerful enough to knock a person off their feet, shatter glass, punch through brick, and bend steel and other metals.

» Sound Immunity: Flock's eardrums have a thick membrane which makes him immune to the effects of his own powers as well as other loud noises.
» Enhanced Hearing: When he focuses, Flock can hear a person's heartbeat at a distance of over twenty feet, people whispering on the other side of a standard soundproofed wall. When he emits high-pitched sound waves and listens the echoes they make when they bounce off nearby objects, he is able to navigate perfectly in pitch black darkness, similar to bats' sense of echolocation.