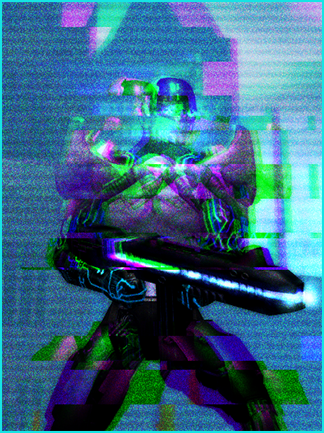 Contrary to popular belief what might he tell you, anti-establishment hacktivist Abel Hawkins came from modest beginnings. As his parents' constant back-and-forth bickering eventually snowballed into a bitter divorce, Abel found solace in computers instead of friends as he was frequently bounced between homes until he permanently moved in with his mother. A naturally gifted whiz with a keyboard, Abel was often looked to for tech support from his neighbors. He was seven. So when his single mother’s house was foreclosed on, Abel helped in the only was he knew how - he brute forced his way into the bank’s network and simply hacked their debt troubles away. If Abel had to pinpoint one “defining moment” in his life that led him onto the path he walks now, that would definitely be it.

From there, his obsession hobby grew. As he matured he became fully entrenched in the hacker scene. Apathy towards his mother’s financial hardships by everyone who could have helped planted the anti-establishment seed that would later be sowed by numerous injustices that Abel both witnessed and suffered. He became a “hacktivist” around the tender age of eighteen, discovering backdoors and exploits within local network systems and righting wrongs, with his biggest feat being toppling a corrupt governor, revealing his numerous illegal dealings.

By the age of twenty Abel had become a full-fledged cybercriminal - a notorious black-hat hacker wanted by more than a few federal agencies. On his twenty-fourth birthday, Abel planned his most ambitious attack yet - an evil maid attack on Obsidian International, a megacorporation he suspected were culpable in the illegal dumping of chemical waste in Kings Row, Paragon City that eventually led to the deaths of dozens of civilians. It was during this Trojan Horse attack on Obsidian that Abel would find something that would change his life forever.

Successfully infiltrating one of their black-site facilities outside of Paragon City, Abel was surprised that while the intel he’d gained was correct, he'd been led into a trap. Obsidian was well aware he was coming. Seized by security personnel, Abel was thoroughly interrogated as to the scope of what he'd discovered about Obsidian. During a short intermission of this questioning, he managed to escape, though he was still trapped inside the facility. He scrambled to find a way out but he was eventually cornered by security and mortally wounded as he fled. Hacking his way into an advanced applied sciences lab, Abel prepared to make his last stand. But he discovered something that saved his life.

The "Ambrosia" Serum. It was a military project he'd heard whispers of on the dark web. Named so after the drink from ancient Greek myths often depicted as conferring longevity or immortality upon whomever consumed it, it was an experimental injection of nanites; microscopic machines that would mold together to cover its user in an techno-organic muscular exoskeleton. Figuring he was going to die anyway, he injected himself with the serum. Immediately healed, Abel used the serum's technology to escape his captors.

Abel used the abilities granted to him by the serum to expose the black-site's illegal activities, though the Obsidian corporation distanced themselves from the situation, claiming the facility had long since been abandoned and those operating inside it were not affiliated with Obsidian in any way. Abe vowed to bring them down eventually and decided to use his newfound abilities to become a vigilante.

Developed by scientists and created for the military to provide combat support for soldiers, The Ambrosia Formula is a delivery system for a serum of nanites that are not only able to create a suit of battle armor on mental command but also grant its user a degree of technopathy. This armor is composed of trillions of techno-organic nanites which can spread across and encase its user and materialize into a fully-functional armor in a matter of seconds. It is neuro-kinetic, meaning it responds to its hosts subconscious thoughts. This composition makes it possible for Abel to vary the hardness and flexibility of the armor's material at will, in turn allowing him to redistribute the suit's components and shapeshift it into a variety of tools and weapons. When the armor is not in use, its nanites remain stored within the pores of Abel's skin. 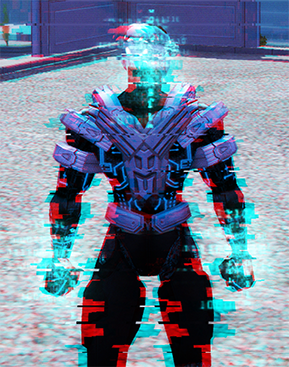 Technopathy: Abe is able to mentally interface and control technology by force of will. His abilities only have a radius of about ten feet, meaning Abel is not able to control technology beyond that which is not in his direct vicinity.
Technomorphing: Abel can reshape parts of his armor into various weapons and technological equipment, including energy cannons, wings, and shields, just by thought.
Enhanced Durability: The nature of Abel's armor offers resistance against both energy and concussive attacks.
Enhanced Sensory Array: Includes tracking/homing systems, microscopic and x-ray vision along with physiological/medical scanners.

A rebel in every sense of the word, Abel absolutely loathes those in power who use it to profit off those without. He's no fan of authority figures and will go out of his way to make sure they know it. But, going to war with the people who own the world inflicts a lot of collateral damage on both him, and his friends & allies. Some of them suggest that he's not so much a champion of the oppressed so much as an adrenaline junkie who uses powerful and amoral opponents as a source of schadenfreude.

If he volunteers information about himself there's a good chance he's either lying, or telling half-truths. 'Abel Hawkins' may not even be his real name.

Braggadocios when it comes to his skills as a hacker, reputation is everything to Abel. He'll often boast how talented he is, but he always makes sure to prove it after he does so.