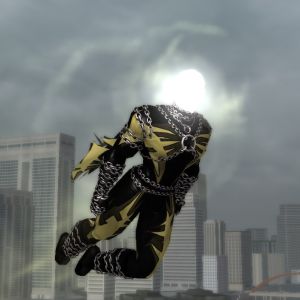 Profile VERY under construction. Bear with me.

Decadent super-sensate. Protector of Praetorians. Big obnoxious glowy lightbulb man. Damon "HardLight" Demora is all of these things and more. Both superhero and superhedonist, he fights tirelessly for his community, and plays even more tirelessly for his own gratification.

Hardlight was fairly well-known under his superhero codename in Praetoria, with the public-facing backstory of being a lesser demigod descended from Helios and acting in service to Emperor Cole. Most Praetorian characters would have at least heard of him. By contrast, on Primal Earth he's a sideline hero and occasionally a guy who appears on TV to talk about issues facing Praetorian refugees.

Damon Demora is a man with a tall, triangular build remeniscent of an aesthetic bodybuilder. His most immediate and (literally) glaring feature is his incandescence: his body radiates white light that vacillates in intensity between looking directly at a lightbulb and staring at the sun. Any of his features are hard to glean without powerful glare protection, but beneath the glow he has Mediterranean features including full lips and a prominent aquiline nose. He shaves his head and face for aesthetic purposes: hair casts a really unpleasant-looking shadow when underlit from the follicle.

SENSORY ABSORPTION: One-half of Damon's primary superpower is the ability to intercept the nervous signals of metahumans in an approximate 50-foot radius around him. This absorption generates a euphoric high not unlike stimulant use to him, regardless of the sensation absorbed. He uses this ability primarily to siphon pain from wounded friends and civilians, as the use of his powers produces a numbing, analgesic effect in those affected. He can hypothetically absorb pleasure just as easily as he can absorb pain, but that would be pretty rude, wouldn't it?

SENSORY ENERGY CONVERSION: The other half of Damon's primary superpower is the conversion and amplification of nervous signals - both his own and those he absorbs - into usable bioenergy of near-infinitely greater magnitude than the sensation input. He can project this energy in any number of ways, from crude force blasts to generating thrust for flight, but the trade-off is not 100% efficient and produces light and heat as byproducts of wasted energy during the conversion process. This is what accounts for his perpetual glow: even if he's not actively absorbing sensation from those around him, the feeling of air or clothes on his skin is enough to suffuse his body with a similar output to an incandescent lightbulb.

ENHANCED SENSES: Owing to his supercharged nervous system, Damon's five senses are noticeably more acute than those of an ordinary human. Although objectively his eagle-like vision is the most useful enhanced sense, he far prefers the touch and taste perks.

In-person, Damon is graceful and comfortable in his frame, with loose body language and an aloof demeanor. His natural speaking voice is smooth and androgynous, with a lilting musical affect that can often make him sound comical when dishing about the latest cape gossip. When out doing superhero work, he consciously slows and enunciates his speech and deepens his voice to better fit his public image.

In private, Damon plays the part of the sarcastic gadfly, but not very effectively; he's far too transparently self-conscious to pull it off. He holds few strong opinions beyond an unspoken preference for state over popular authority (an artifact of his Praetorian upbringing), his duty to the Praetorian diaspora in Paragon City, and an all-consuming dedication to the principles of ethical hedonism. Damon isn't shy about letting others know that he lives for self-indulgence, and tends to write off less libertine capes as prudes who haven't taken full advantage of the lack of accountability intrinsic to being a superhero or villain.

Damon Demora was born into a privileged family of Imperial City functionaries with strong ties to robotics and heavy industry - the cornerstones of Emperor Cole's power base. He was a monumentally boring child, as children of the idle rich often are. [UNDER CONSTRUCTION]

During the 2010 war between Praetorian and Primal Earth, a 21-year-old Damon was embedded with a unit of the Imperial Defense Force during the failed occupation of Steel Canyon. Though due to the nature of his powers he served primarily as a force multiplier and support element, he did kill or severely injure a large number of Primal defenders in the process, including Paragon Police, Longbow, Vanguard, and Primal Earth heroes. During the combat he was badly injured and, cut off from his homeworld by the September 30th Nova Praetoria Riots, captured by a Vanguard detachment and interned as a Prisoner of War for the duration of the conflict.

Since being released from Vanguard custody in 2015, Damon was naturalized as an American citizen and has passed the tests to obtain a standard Paragon City hero license. As a legal hero, he works primarily with Longbow and Vanguard to combat global threats. He's reprised his role as "Hardlight," seeing no reason to abandon a name with established associations, though uses a different costume that invokes less Praetorian imagery. He eschews "street level" hero work with the exception of Brickstown, where he is a fixture of the Praetorian refugee enclave and staunch defender of Praetorian citizens from the predations of Freakshow and Council.

When not off blasting supervillains he works for a nonprofit associated with Provost Marchand's New Praetorians movement, advocating for improved living situations, increased trust, and reconstruction funding for the Praetorian refugee community. He's appeared in daytime talk shows and news programs under his real name as a "Praetoria specialist," usually using his soapbox to highlight injustices committed to the Praetorian community and systemic discrimination in Primal institutions. His public-facing persona in this role is considerably more professional than how he presents in private, leaning heavily on his "Roman Demigod" optics.

Damon's private life has fallen off in standard-of-living since his Powers Division days. In Imperial City he had a penthouse apartment and the funding to throw lavish parties, but now he has a condominium in a warehouse retrofitted as apartments. He tries to take the shift in stride, but his appetite for monstrous excess has lead to him being something of a voyeur and social parasite. He's a common sight in Pocket D, because he can sideline on the ambient excess native to the super-community to keep a steady flow of novel sensation.