A man trying to rectify one of his greatest mistakes, Chester Jenkins lives with his guilt over the blight that he has brought upon the city.

A far cry from the happy go lucky playboy that he once was, Jenkins has all but alienated many of his closest friends in his desperate bid to try to reclaim the glory that he once knew while attempting to lock up and cure the 'monsters' that he has helped create.

In his glory days, Chester Jenkins was a member of Codex Prime, a supergroup/advertising vehicle concocted by Jacob Stround, the CEO of Primary Industries, in an attempt to capitalize on the growing number of superhero celebrities that seemed to be popping up. As a member of Codex Prime, Chester Jenkins had access to near unlimited financial resources to improve and perfect his arsenal of crime fighting equipment. But life wasn't all business for Chester Jenkins. Like some of the other team members, Jenkins loved the limelight. He dated actresses, models, and the occasional heroine. But Jenkins found love in the one place that it was truly complicated. Work. Jenkins fell in love at first sight with his boss's administrative assistant, Jennifer Espinosa. The two dated in secret for a few months before making their relationship known to their boss, who was arguably against the idea.

All the while, Jenkins was racking up a rather unimpressive rogues gallery that managed to keep his name in the paper, and his family in strange predicaments. Though hardly ever taken seriously do to his showboating behavior, Jenkins managed to make a great deal of friends in the superhero world.

After a couple of years of dating, Chester and Jennifer were married atop City Hall in Atlas Park. Around that same time, Chester and his friend and colleague Phoenix Stormhawk managed to successfully lead a hostile takeover of Primary Industries. As the new CEO of Primary Industries, Chester retired from the team so that he could focus his attention on the operations of the company. After a rocky start involving an embezzling accountant, Primary Industries became one of the world's leaders in technological and medicinal innovations. But there was a great cost that Jenkins hadn't considered. His relationship with his wife had become strained and ultimately dissolved. She left him with his money and expensive toys, but tore the very heart from his chest. Jenkins threw himself into his work, even occasionally putting his costume back on in suicidal attempts prove his worth.

After about five years, Primary Industries, under the leadership of Jenkins, had created an experimental cancer cure that was versatile enough to lessen the number of chemotherapy and radiation treatments by 75%. During the press conference, something went horribly wrong back at the lab where the chemical was being stored and finalized. An armed robber fleeing the cops took shelter in the lab, and the facility employees hostage. When the gun accidently discharged, the police stormed the building and opened fire, puncturing the storage containers and emitting a noxious cloud of gas that spread half a city block. Some were treated at site and released, but others went unnoticed, and some such as the armed gunman who triggered the event, went into hiding, giving the gas's unknown side effects time to blossom. The chemical was based on a temporary gene randomizer that allowed the body to counteract the cellular mutation that cancer is known for. Unfortunately, in too large of doses, the chemical warped the mind, and in some cases, the body as well. After the incident, many petty criminals began popping up with strange abilities and normal citizens were driven insane.

With the sudden surge in the metavillain population, Jenkins enlisted the help of some friends to quell the uprising that had begun in the streets. Many of the criminals were simple to apprehend, but some were not so simple. One such was The Good Humour Man. A criminal granted vast, yet demented, levels of intelligence, GHM managed to arrange to ambush one of Jenkins' closest friends, Cap Bourbon, also known as Happenstance. The mbush and brutal beating left Cap in a coma with minimal brain activity.

Jenkins sank into a disconnected state, ignoring his job duties as well as his relationships with friends and family. Jenkins has one goal left, to bring in the man who he created, and avenge his friend.

In the beginning, Chester Jenkins was a happy go lucky goof ball. He hadn't a care in the world, and knew that he liveda charmed life.

Over time, Jenkins became jaded due to the many emotional and physical problems that began ailing himself and those around him, most notably his comatose friend, and waning fortune. 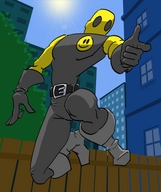 Martial Artist: Humor has the fighting ability of someone who has been thouroughly trained in several forms of unarmed combat.

Invention: Jenkins has a very creative mind. And when combined with his engineering prowess, Jenkins is capable of near Macgyver level inginuity.

Though in great physical condition, without the aide of his suit, Jenkins is only capable of lifing a few hundred pounds. While in full costume, Humor is able to lift between 10 and 25 tons

Though Humor's battle suit amplifies his strength, speed and endurance, he is still subject to normal human exhaustion over time.

Smiley Bombs: Though originally a device that emitted a chemical gas that targeted the pleasure centers of the brain, the devices have been adjusted to house a modified form of the antidote to the mtuagen's side effects that negates the mutagen's effects temporarily and leaves them in a euphoric state.

Sad Bombs: Simply localized explosives that can be set to timers as well as to different degrees of strength.

Suit: The Humor Armor aplifies the strength of its wearer neary one hundred times and increases the relfexes to nearly five times those of peak human performance. In addition, the suit in durable enough to suppress hollow point rounds as well as capable of protecting its wearer from a fall from several stories up.

Mask: Humor's mask is equiped with state of the art targeting systems as well as infrared and x-ray capabilities.

Boots: Working in conjunction with the suit, Humor employs spring heeled jumping boots that allow him to spring several feet into the air as well as carom off of walls.

Humor relys on his boots to help him traverse the cityscape.

Originally envisioned as a villain, Humor was changed to a hero at last minute for no real reason. The screw ball behavior and persona of the original version of Humor was to play off of the name as best as possible. Over time, I allowed Humor to mature, at least in my head if not 'on paper'. I began to think that it would be more interesting to take a formerly careless and immature character and force him to realize that life wasn't all fun and games.

Humor is at his core a Speedball parallel. He was more interested with entertaining than getting the job done. Power-wise, he was more of a combination of Spider-Man and the Green Goblin.

Later in the character's life, he began to more resemble Tony Stark, with a little Booster Gold mixed in. Well, Booster Gold if they had used 52 and Infinite Crisis to allow him to grow into a serious character.