"I DON'T SUFFER FROM INSANITY.
I ENJOY IT." 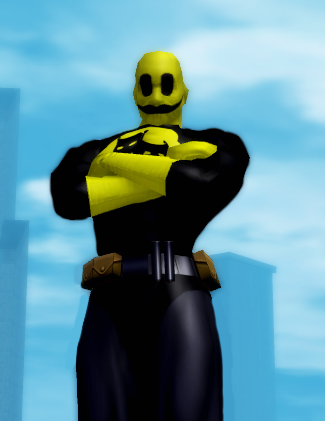 Born in Rhode Island to a fireman and a baker respectively, Eddie Edwards lived an exceedingly normal life with his parents, Jim and Maggie, on the edge of Paragon City. More of a bookworm than his father would have liked, Eddie was one of those kids who'd rather watch the Discovery channel than play football. Bullied for his bookish nature, he found it difficult to make friends and often retreated into the world of comic books. Living so close to a city full of superheroes had a profound effect on a young Eddie. He'd daydream about being super strong or able to fly. His father however, disapproved of both his interest and the idea of the caped crusaders in general. "Always taking the credit from the real heroes" he'd say, practically every time he picked up a newspaper and read a headline he didn't like.

"Don't get me wrong, I always admired my dad growing up but man did he have a grudge against Capes. I think they made him feel week. Or maybe he was a little jealous. Or both. Hell, I don't know." - Humor

Eventually his father's inferiority complex festered and grew into full-blown alcoholism. Compounded with financial troubles as well, Jim found himself unable to support his family and when his drinking cost him his job, he became something of a monster. He'd openly cheat on his wife and chastise Eddie for being weak. He became abusive and eventually, Eddie's mother up and left. Unfortunately, she didn't take Eddie with her.

"Y'know, it's funny. Not ha-ha funny, but. I did eventually toughen up. But in spite of my old man, not because of him." - Humor

As soon as he turned eighteen, Eddie moved out and never looked back. He grew up wanting to be a superhero but eventually... He grew up. After years of abuse at the hands of his father, he locked those childhood fantasies in a box, focused on more realistic goals, and decided to put his smarts to good use. He waited tables and worked for a moving company for about a year, slowly scrounging up enough money to go to a decent college and after majoring in both biology and chemistry, Eddie managed to score an internship at Apogee Labs, a research company focused on bleeding-edge biotechnology. Over the years he worked his way up from intern to full-fledged scientist.

"Back then, I loved my work. I was helping people. Not in the way I'd have liked to as a kid, but. This was just as good. Things were finally going my way. But you know what they say about luck..." - Humor

Assigned to Apogee's latest project, Eddie and his think-tank were tasked with perfecting a working gaseous formula for cellular regeneration to help amputees. Thrilled to be a part of such a groundbreaking and revolutionary undertaking, Eddie threw himself into the project. To say the work was difficult would be an understatement and the group reached more than a few dead-ends. The mice that served as their test subjects all ended up displaying symptoms of mania and dying before any significant regeneration could be achieved.

And then they were suddenly put on a deadline. The funding for their project would be pulled and they would all be re-assigned to other (far less exciting) projects if they couldn't come up with any significant results. They tried everything they could think of but it just wasn't working. Unable to give up on the project that he'd spent years working on, Eddie hid in the bathroom until the work day ended so he could stay in the lab overnight, on the off chance that he managed to come up with something, anything he could bring to the higher-ups.

"Oh I found something alright. It wasn't results if that's what you were expecting. Hell, I wish. My life would be a lot more simpler if I had, that's for damn sure. No, I found out I wasn't the only one who decided to stay behind that night." - Humor

In the labs, one of his fellow team members was met by the head of their division. Eddie followed them to an elevator they rode down to a dingy basement sub-level of the building he didn't even know existed. In it was something he couldn't have prepared for. Dozens of containment cells, filled with people in various stages of health. Apogee was using human test subjects. Naturally horrified, Eddie hightailed it out of the building. But not before snapping a few pictures.

"I thought I was some kind of super-spy whistle-blower about to bring this whole house of cards down. So like an idiot, I took what I discovered to the very top." - Humor

The next night Eddie met with Jameson Clark, the CEO of Apogee, in secret. He personally brought Clark down to the illegal labs to show him what was really going on. It never occurred to poor Eddie that he might have already known. And know he did. He revealed that the formula was never intended to be available to the general populace. It would have been auctioned off to whoever had the capital to buy it. Terrorists. Private armies. Warlords. But the lack of news and progress was frustrating the potential buyers. And now that he knew, Eddie had to be dealt with. Not waiting around to be caught, Eddie made a run for it as security guards ran after him.

"I couldn't believe it. Here I am being chased by the very people I worked with. The security guards I joked with and saw every day. I was on Nelson's softball team at the last company picnic. S#%!, I went to Craig's wedding!" - Humor

Panicking and with nowhere else to go, Eddie locked himself inside one the containment cells. "Fine. We're cleaning house anyways. What's one more body among the trash heap?" Clark mused. He activated the distribution system and the cell was flooded with the poisonous gas. The irony wasn't lost on Eddie. Choking to death on the very formula he'd spent the last six years of his life working on. It was almost... funny.

"Everything after that's a little hazy from my end. I don't remember much, but what I do remember... well, you ever have a really intense dream and you wake up and find that you can't shake it off? It was like that. Times a thousand. I wouldn't wish that experience on anyone. Well. Maybe a few people." - Humor

For some reason or another, Eddie didn't die. No, the gaseous formula that had killed every test subject mutated Eddie as he emerged from the containment cell, laughing wildly. In a crazed and manic state, Eddie threw himself into his would-be captors. They riddled him with bullets but were horrified as Eddie shook them off. A terrified Jameson fled as Eddie singlehandedly overpowered and dispatched the security guards. The unstable Eddie pursued and confronted Jameson, who accidentally crashed through a window in his penthouse office and fell to his death.

With Apogee's human testing trials exposed, the company folded and Eddie ironically found himself out of work.

"So. There I was. Jobless. I was hesitant to jump back into the world of super science after everything I'd work for had been misused by rich a**holes. That and the side effects I was experiencing would have made a regular nine-to-five somewhat... difficult." - Humor

Running tests on himself, Eddie discovered the regenerative formula had successfully interacted with his body chemistry, albeit with a negative side effects. Bouts of mania, uncontrollable laughter and schizophrenia. Unsure of what to do with himself in his new "condition", it was only after being mugged on the way home from picking up groceries did Eddie have a real revelation.

"This bozo pulled a gun on me. he laughed and called me crazy when I resisted. It was in that moment, as he pulled the trigger, that everything just clicked. I looked up at him through the blood, laughed right back at him and said 'I'm gonna' become a f*%#ing superhero'." - Humor
Powers

As a result of being dosed with the experimental healing formula his team of scientists had developed, Humor's body was changed at a cellular level, and granted him with various superhuman abilities.
Accelerated Healing: Humor's primary power is his accelerated healing factor that enables him to regenerate damaged or destroyed tissue with far greater efficiency than that of an ordinary human. Humor is able to heal from injuries such as cuts and abrasions, puncture wounds, bullet wounds, broken bones, and severe burns within moments. He can even regrow missing limbs in a matter of hours.

•Foreign Chemical Resistance: Humor's body is also highly resistant to poisons and most drugs. He can, however, be affected by certain drugs (tranquilizers) if exposed to a large enough dosage.
•Disease Immunity: The unique regenerative qualities of Humor's healing factor also extend to his immune system; he is immune to all diseases, infections, disorders, imperfection, and resistant to elemental extremes

Enhanced Strength: Humor's physical strength was similarly enhanced as well. While he's unable to stand to-to-toe with various other super-strong heroes, he's able to lift grown men above his head with ease.

Enhanced Agility & Reflexes Humor's agility, flexibility, dexterity, balance, and bodily coordination are enhanced to levels that are beyond the natural physical limits of even the finest human athlete.

Brilliant Chemist: Humor is a proficient chemist, creating and maintaining the sedative and hallucinogenic vapors in his weaponry and equipment.
Expert Inventor/Engineer: Humor possesses a deductive mind and a talent for invention, able to maintain and augment the arsenal of gimmicks and devices he's created and utilize them expertly in furtherance of his crime-fighting career.
Competent Hand-to-Hand Combatant: Though he possesses no formal (or informal for that matter) training in personal combat, through pure practice Humor's developed his own personal form of hand-to-hand fighting, consisting of leaping and wild brawling techniques. These erratic movements help keep his enemies guessing and his moves that much harder to predict.