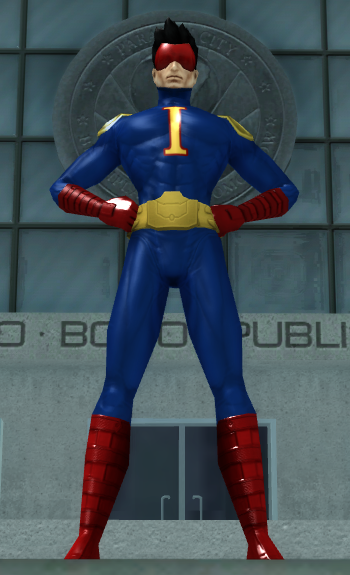 Nicholas Oleander Thyme was destined to become a superhero. His father, the original Incrediman, was a legendary do-gooder. His legacy started all the way back in the 1970s, and classic pulp comics of Incrediman's earliest bank robbery busts and superpowered slug-fests are still available today. There's something timeless about a true blue American hero. Someone who stands up to evil without batting an eye. Someone who defends the innocent and asks for nothing in return. Someone who represents the most Incredible part in us all. The original Incrediman first hit it big after teaming up with the two other heroes, Greenthumb and Dynamica. Together, they were the Super Pals, and well, their toys practically sold themselves. For unknown reasons, the trio eventually went their separate ways, and Incrediman was left a solo act. In the ensuing decades, Incrediman's list of heroic accolades and accomplishments ballooned. He battled countless old-timey supervillains, fought the Rikti, even saved people from the catastrophic earthquake in Faultline. It was a career anyone would be proud of, but eventually it was time for the world's most incredible man to settle down and start a family.

That's where Nick comes in. He's the first of two kids in the Thyme family, the other being Justin. As the oldest, Nick always looked out for his younger brother. If anyone gave Justin a hard time, Nick would be there to stick up for the little guy. This responsibility only deepened when he learned their father's incredible abilities had passed on to him... but not Justin. Nick knew that evildoers would always be out to get their family, and if Justin couldn't defend himself, well, he would need to be as strong as his dad was to save him. Unfortunately, the name 'Incrediman' came with many secrets. After his superhuman ability fully manifested, Nick was somewhat quarantined from his brother to be groomed into a proper hero. He lived to please his father, but the stern figure's approval was always elusive. All Nick ever wanted was to be a hero, but the path laid out for him was paved with corporate sponsorships and shady government dealings. In other words, to become the next Incrediman, Nick had to sell his soul.

With his father guiding his way, Nick stepped into the limelight proudly. He was a modern take on his father's classic persona, and became known throughout Paragon as the new Incrediman. Sure, behind closed doors there were payoffs from Crey and quid-pro-quo arrangements with corporate lobbyists, but all that was a small price to be living the dream. The hardest pill to swallow was campaigning against mutants, but Nick's father assured him that mutantkind, left unchecked, posed a grave threat to the rest of the world. The government needed to be able to catalog them -- control them. The first bill that Nick, as Incrediman, publicly endorsed was written to strip mutants of their rights if they were ever involved in an incident where their powers caused collateral damage. His support was key in winning a few battleground states. For the first time, Nick's father was almost proud of him.

During Nick's manufactured rise to prominence, his brother Justin took a desk job at the United Nations. Unwilling to let his un-super body prevent him from being a hero, Justin trained to become Ace, an agent of a United Nations subdivision called ProForce which specialized in worldwide peacekeeping endeavors. Justin worked alongside some of the finest superheroes on the planet (even if most of the time he was acting as a butler or valet). Each stride Justin took forward as Ace, the more Nick began to resent him. He didn't have powers. He wasn't Incrediman. He never could be. That all changed when an attack on the defenseless ProForce HQ left Justin no choice but to use an experimental serum on himself. Ace, now artificially raised to peak human ability, repelled the assault, and Nick's greatest fear had come true: his little brother was super.

Incrediman now has a bitter sibling rivalry with Ace. Their family squabbles often spill out into their superheroic endeavors. Primarily, this manifests in Incrediman doing whatever it takes to stonewall Ace's new team, The Vanquishers. Fully brainwashed by his father, Nick has become a true douchebag older brother from hell.
Retrieved from "http://www.virtueverse.net/wiki/Incrediman"
Categories: Character | Vanqendersverse | Hero | Mutant | Brute | Everlasting | Crey | Legacy