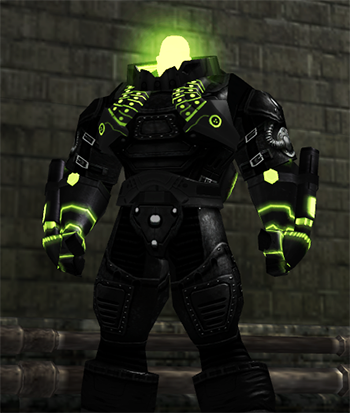 Clumsy and awkward Terra Volta reactor technician Guy Allen was accidentally locked in an unshielded closet by an inexperienced superhero who attempted to defend the reactor against Freakshow saboteurs by himself. When the reactor overloaded, Guy was bombarded with deadly radiation. But instead of killing him, his body absorbed the radiation. Now able to emit toxic radiation with a mere thought and blaming superheroes for his condition, Guy acts as a lethal assassin with a reputation for targeting caped crusaders.

Transformed into a being made solely of radiation, Guy must wear a containment suit lest he kill any living thing he comes into contact with. Though he no longer requires sleep, food, or air to breathe, he must regularly absorb a large amount of foreign radiation to remain corporeal. He is able to convert the radiation he absorbs into physical strength, greatly increasing the force of his strikes and the amount of weight he can lift.