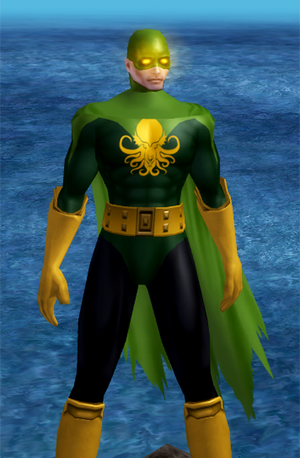 Thousands of years ago, a group of like-minded men and women, fed up with the conformity and oppression of their church, formed a religious group, calling themselves The Children of the Beast. These men and women believed that the Kraken, the legendary and mythic sea creature, had shaped the world and was responsible for man's existence. The strongest and most charismatic among them became the leader and was presented with the Cowl of the Kraken, an extremely powerful and supernatural artifact that when worn allowed its wearer to sap the life-force from their enemies and increase their own physical attributes in the process. To appease their "god", the group made regular ritualistic sacrifices, routinely kidnapping both the willing and unwilling.

Over the years, as they grew in both power and influence, they became more and more careless in their operations. Whispers of the groups' existence began to spread as they became less of a secret religious order and more of a feared, shadowy entity. The general population began calling them The Cult of the Kraken. For years the cult operated in secret but their reckless behavior brought about their eventual demise. A young warrior began investigating the cult after discovering his mother had been one of their sacrifices. He single-handedly hunted down and killed every member of the cult, exposing their existence and bringing a light to their corruption. Having learned of its power, he confiscated the cowl and hid it away so it could never be used again. Before he died, he charged his daughter with its safekeeping. 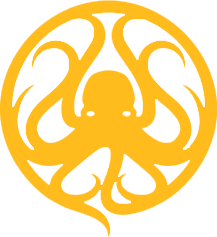 Unbeknownst to him however, before he was killed, the leader of the cult had hidden away their sacred texts, detailing their tenants and beliefs. They possessed a far more "heroic" retelling of the events that led to their downfall and eventually, the scriptures were found. As it spoke to the oppressed and the spiritually despondent of the time, the groups beliefs began to take root once again. Eventually, The Cult of the Kraken was reborn. To regain their lost power, the newly reformed cult searched for the cowl once more. Having passed its location down over the years, the young warrior's descendant gathered allies of his own in order to protect the artifact. They called themselves The Keepers and the two orders fought for supremacy over one another for centuries.

Fast forward a thousand years. In 2019, The Keepers were losing. As their numbers dwindled, a young and headstrong member of the order named Lucas Lawson suggested they use The Cowl of the Kraken to combat the cult. The elders forbade it, as the power of the cowl was said to corrupt the wearer and eventually drive them mad. But after the cult discovered the last of the Keepers' hidden sanctums and slaughtered most of the remaining members of the order, Luke saw no other option. Disobeying his superiors, he absconded with and donned the cowl. Possessing considerable willpower, Luke was able to harness its power, fighting off any agents of the cult that attacked him.

Unfortunately, by the time he did so, Luke was the last Keeper left standing. Now an army of one, Luke is tasked with both keeping the cowl out of the hands of the cult along with the eventual re-establishment of The Keepers. He's traveled from New York City to Paragon to both gather allies in his fight and better understand his enemy.

It's unknown just when the Cowl of the Kraken was created or how even the Cult came to possess it all those years ago in the first place. All that Lucas knows is that its an artifact of immense power that must be kept out of the hands of those who'd use it for evil. The cowl itself possesses a host of powerful, mystical abilities.

Life-Force Absorption: The Cowl of the Kraken allows its wearer to drain the life forces of other human beings by either physical touch or direct, prolonged eye contact. The victims are paralyzed during absorption and if so willed by the wearer, can be drained of life until they're dead.

The Dread Gaze: The Dread Gaze is a supernatural ability that incapacitates the victims of those who lock eyes with the cowl's wearer. It induces paralysis by way of imposing intense feelings of terror and dread upon its victims. They experience their greatest fears, whatever they happen to be.

The power of Cowl can incredibly addictive. The absorption of another's life-force provides a rush comparable to the most powerful of narcotics and though its continual use won't physically debilitate its user, it may have extreme negative effects on their psyche.

Addiction: The Keepers of the Cowl forbade its use for a reason. Its power eventually corrupts the wearer to the point of megalomania and insanity. Legend has it that everyone who's ever worn the cowl has succumbed to its effects and its led to their eventual downfall.

Luke has been described by senior members of The Keepers as impetuous, impulsive and reckless, often acting without forethought. He arrogantly believes he can accomplish anything if he puts enough effort into it. Though its true that he possesses incredible willpower and fortitude, his overconfidence in his abilities often leads to him underestimating his enemies. He takes his duty as Keeper of the Cowl seriously however.