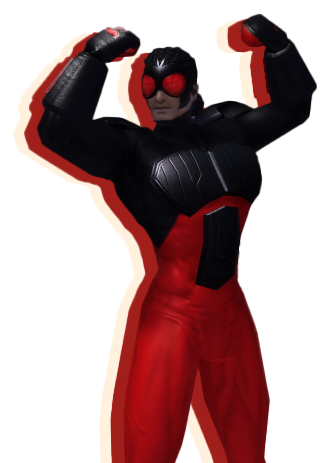 Andre Parker's parents moved from the hood in Kings Row to the sunny suburbs of Steel Canyon when he was just eleven when too many instances of gang violence reached their block. He didn't take to his new surroundings well as he was made fun of often for being "the poor kid" in class.

A lot of noses were bloodied on the playground those first few months.

While his father preached non-violence, his mom was proud of him for standing up for himself. But they both agreed it'd be best for him to not get in anymore fights. Hoping for him to make friends, his parents pressured him to join the school's science club. It didn't really help. It actually made him feel like more of an outcast, as science wasn't exactly his strong suit. His parents', either. So when he brought home some pretty advanced homework, his parents were stumped. They pointed him towards their next-door-neighbor. They claimed he was friendly enough, albeit a bit... eccentric.

Not a "take over the world with a giant laser mad scientist" or a "reanimate the dead" mad scientist. No, he was the "I'm going to create a transparent toaster that plays elevator music for no reason" kind of mad scientist. But he was brilliant. And help Andre he did. The two actually became friends.

The Doc would go on to become something of a mentor to Andre the next few years. Not just regarding science, but life itself. He managed to quell the hostility in Andre as his academic pursuits flourished. He'd stop by Edmund's cluttered and cramped makeshift lab in his garage after school and help him with whatever wacky science experiment he'd thought up that particular week. There was the bike helmet that read your mind and controlled your bike for you. Air-conditioned shoes. Edible books. So when Edmund came to Andre with an idea that could actually change the world, he was shocked.

Edmund claimed he was on the verge of perfecting a machine that manipulated the density of an object.

"Imagine it, Andre! This will revolutionize the construction industry! Steel beams made light as feathers! Hospitals and schools built in weeks rather than years!"

And it worked. After a few less-than-successful trials, Edmund and Andre actually managed to make his junker Chevy Bel-Air float like a balloon. The prototype machine was no longer a prototype. Then they went and tried to move it.

As they wheeled the matter manipulator from Edmund's lab to his backyard a drunk driver swerved and hopped the curb, narrowly missing the Andre, Edmund and the machine. But as Andre dived out of the path of the oncoming car, he accidentally switched the machine on and fell backwards onto it. There was an explosion of sparks and light as the machine erupted and Andre was thrown across Edmund's front lawn and through his house. Literally. Andre phased right through the house.

Miraculously, Edmund found Andre unharmed. But when he attempted to help him to his feet, his hand passed through Andre's. He had become trapped in an intangible form! After a week or two of trial and error, Edmund managed to undo the damage to Andre, but afterwards... well, Andre discovered he wasn't exactly the same. He could alter his body's density at will. He could make himself lighter than air or as heavy as a tank. He found that with effort, he was also able to pass through solid objects.

Edmund insisted Andre let him continue his tests to find away to return him to normal. Andre refused. Why get rid of superpowers? With great power and all that noise, right?

Andre possesses the power to exert conscious control over the sub-atomic electromagnetic particles that carry the force of attraction between the molecules of his body. This enables him to control his density, granting him such powers as superhuman strength, flight, and intangibility.

Density Manipulation: Mentally willing himself to his maximum density, Andre can make his body ten times harder than diamonds. In this form, he is nigh immovable and nearly indestructible.

Super Strength: His base strength is nearly peak human, and increasing his density to it's fullest will increase his strength to the point where he can lift (press) over five tons.

Phasing & Intangibility: Lowering his body's density to it's lowest point allows Andre to become incorporeal and pass through solid objects. When attacked, he can shift into a "phasing" state so as to allow oncoming projectiles or energy blasts to harmlessly pass through him.

Rough around the edges with a chip on his shoulder the size of Brooklyn, Andre is quick to anger and even quicker to fight. Often underestimated by his looks, Andre actually possesses a wealth of knowledge from years of mentoring by the super-scientist Edmund Clarke. Quick to stick up for the little guy, it's more likely to find Andre fighting street-level crime than giant monsters.