Susan Miller is a self-absorbed, fast-talking, hipster goof-off who makes most of her life's decisions based on what she thinks would be funny. She's amusing at parties, but generally dangerous and reckless. Basically, she's a problem. A real fan's fan of destroying things that shouldn't be destroyed; in Susan's mind, every moment requires a one-liner.

Susan has floated between numerous unsuspecting hero groups over the years, often quitting in the first week. But she has made an assortment of odd contacts over the years because of it.

Her current Supergroup is Battle Ready Organization, because she thinks they let her boss them around, and has a particular fondness for their member Web, who she thinks of as a mentor. God help her.

Susan has only one non-superhero friend; she lets her couch surf at her apartment in Peregrine.

Susan has two enemies. One is the petty villain gang known as The Starship Troopers, who once stole her pet cat. Her other enemy is the supervillain group The Coalition of Paragon Real Estate, which would like to see Susan burn at the stake for her many destructive misadventures.

Susan has ridiculously invulnerable skin, making her very difficult to hurt physically, due to DNA manipulation at the hands of The Devouring Earth.

She also has great strength. This is unfortunately mostly used to toss around large things that shouldn't be tossed around. Her strength allows her to perform "the hyper-leap" (as she calls it)--which is... a big jump.

There are a few, minor problems Susan has due to altered DNA.

Sometimes the gift of incredible superhero powers can ruin a person. Susan is one such case.

In high school, Susan was a good student. And even shy. As her senior year rolled around, she became enticed with the glamor of Paragon, and convinced her parents over a commercial break of American Idol (they are purported to be avid TV watchers) to pay for her college there. They said yes so she would stop blocking the screen. 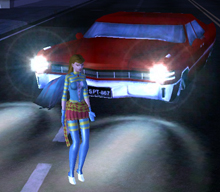 Towards the end of Susan's first semester, while naively collecting geological samples in a cave in Founders Falls for a class, she was apprehended by a derpy horde of Devouring Earth monsters whom stumbled upon her. Susan spent the next twelve months in some sort of coma-like state, deep within the nasty recesses of The Hive. A random group of heroes discovered and rescued her, and she was reawakened with the help of SERAPH.

While still unclear exactly what the Devouring Earth's intention with Susan was, it appears she was some sort of experiment. Her DNA transformed, scientists were worried about her, and deemed her powers "unstable" and "dangerous." These words scared Susan... and rather than try to resolve this, she instead stopped answering these scientists calls, and changed her cellphone number, to avoid running more tests. She also thought her powers were "totally awesome," and didn't want any scientists ruining her wacky, ultra-powered fun.

Over the next few months, Susan's *ego* would make the next transformation, becoming certain that she was very important as a hero. And in general. Soaking up any chance to bask in her objectively-questionable glory, Susan became intoxicated with putting herself in ridiculous situations and challenging herself, becoming more fearless, thanks to her near-indestructibility. For a long time she was obsessed with getting press and the attention of the news, often failing at that.

She'd chilled out a little on the fame-seeking in the last year, thanks largely to her alcoholism. 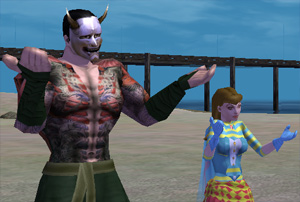 Chillin' with the Tsoo at the beach; "God Bless you."