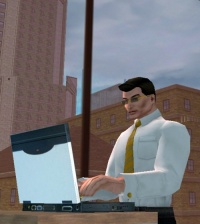 As Novapulse, Andrew strives to emulate those superheroes he grew up with. Noble and virtuous he patrols Paragon city and fearlessly defends it's citizens against any and all dangers. However, Novapulse is more apt to lead by example these days than to actively lead a team of heroes. Due to the circumstances surrounding his departure from the Silver Guard he often patrols alone and prefers to let others take the lead. To this end he has promoted Entropia to lead Novatech's metahuman division offering his assistance when needed.

Born into wealth, Andrew is unfamiliar with some of the realities of life that most people have to deal with. His father, having worked to achieve his success and fortune, made certain that Andrew understood the value of a hard days work. While familiar with the lifestyle of the rich and famous he does not often adopt the air of superiority that is common among the upper-class. Outwardly friendly and charismatic, in his younger days, he often lived up to the millionaire playboy lifestyle. Secretly however Andrew feels more at home with experimental circuitry than chairing a board meeting or clubbing with the "in crowd". Kind, and generous he has made an effort to ensure that Novatech continues its philanthropic roles as well as its commercial ones.

More recently he is enjoying the role of a loving and devoted husband and father. Andrew now spends a significant amount of time with his family, Dakota and Andrea. Novapulse still patrols the streets of Paragon as he continues to create and reclaim a safe environment for all the families of Paragon City. 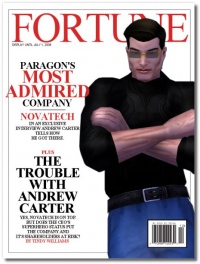 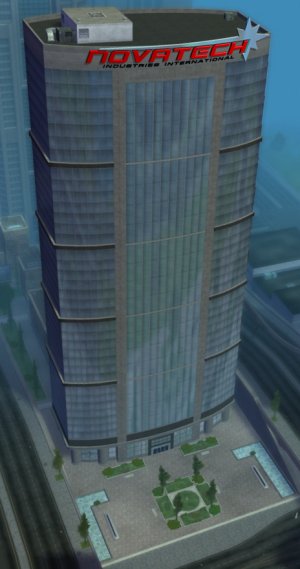 Andrew, like his father, possesses a genius level intellect as well as an inspired creativity. This combination has gifted him with the ability to conceive of brilliantly unorthodox solutions to problems. His aptitudes were recognized early and he was encouraged to study extensively. At the age of sixteen Andrew was admitted to MIT where he studied several simultaneous specialties and eventually graduated at the top of his class. He has several engineering degrees and is uniquely gifted with electronic hardware/software engineering and applied/theoretical physics. His work at Novatech has exposed him to a wide range of disciplines.

Novatech is a world leader in hi-tech research and development specializing in the medical, cybernetic, satellite communications, trans-dimensional transportation, and weapons manufacturing fields. Their client list includes Paragon City Medical, Paragon Police Department, Paragon Transit Authority, Longbow, Vanguard, Pocket D and NASA. As C.E.O. of Novatech, Andrew has unlimited access to the personnel and resources of a multi-billion dollar international corporation and all its subsidiaries. In the past, direct conflict with Crey Industries limited Novatech's ability to expand in the high-tech marketplace. After several costly "encounters" and due in part to the efforts of Novapulse and the Silver Guard in exposing many of Crey's quasi-legal practices there exists a tenuous "cease fire" between the two industry giants.

Recently, Novatech has acquired the cybernetics division of Sohgo Security Incorporated, gaining a foothold in the Japanese technology marketplace. 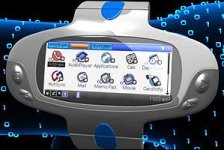 Andrew wears an advanced smart-device which can interface with almost any kind of electronic equipment. This device not only functions as a complete communications and data storage solution it also allows him access to some of the Novapulse systems while the armor is in "storage" (When not in use, the armor is shifted out of phase with normal space-time). From the interface Andrew can access and apply several doses of nanodoctors which can be used to treat a wide variety of medical problems.

He also carries a captured Crey Pistol for personal defense.

The Novapulse Tactical Battlesuit is the crowning achievement of Andrew Carter and Novatech Industries. First developed in 2002 to aid in the Rikti War effort, the prototype armor was crude in comparison but has undergone nearly a decade of improvements and refinements. Constructed with experimental techniques and materials, it remains firmly beyond the cutting edge of modern technology. Armed with an impressive array of offensive and defensive capabilities Novapulse continues to bring comfort and security to the people of Paragon City.

Originally comprised of advanced indigenous materials, over time the Novapulse Armor has been augmented with materials of both alien and trans-dimensional origin. Constructed at the atomic level by an advanced nanotech process, the unique composite materials provide excellent protection from both hazardous environmental dangers and from a wide variety of tactical threats up to and including mundane small, medium, and heavy arms. The armor can be breached however by both specialized armor piercing and meta-human attacks. 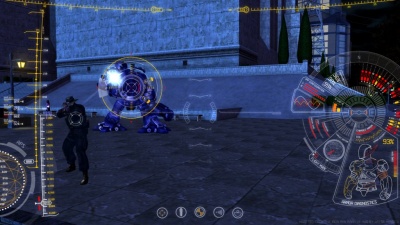 Primary armor control is handled via direct neural connection located in the helmet. The Neural Interface Device (NID) allows for nearly instantaneous command interpretation and implementation as well as bi-directional sensory feedback from both the pilot and the armor's advanced suite of sensors. The armor's next generation artificial intelligence instantaneously processes the data and determines informational priority, disseminating mission critical data to the pilot's heads-up display. Should the pilot become incapacitated, the command AI can override the armor systems for a short period of time. 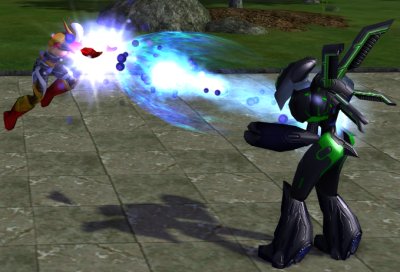 Description: The primary offensive system consists of a pair of Isokinetic Plasma Projectors (IPP) housed in the gauntlets. Target damage takes the form of direct high-energy exposure and high-yield kinetic force. The projectors can be easily configured to create a wide variety of effects ranging from a strong "push", to a massive overload (Nova), severely damaging anyone in close proximity.

Range: IPP configuration settings greatly affect the stability of the projected energy matrix. Under normal conditions the IPP is rated for a minimum effective range of 17.1m to a maximum of 60.1m. 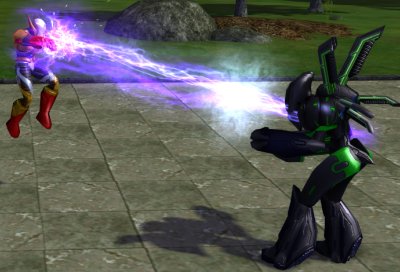 Description: The massive amounts of power available from the armor’s generators can be projected externally in the form of direct electrical effects. Highly effective against various constructs the output can also be configured to have a profound effect on the nervous system of most potential targets, effectively disrupting normal motor impulses and rendering the target helpless for a short period.

Using a series of omni-directional emitters the armor can project a contour-following energy field that provides moderate resistance to both mundane and energy-based attacks. This system has been adapted to give minor protection from psionic-based attacks, however the technology is highly experimental.

Powered flight is accomplished using a gravitational repulsion field piggybacked over the Charged Armor emitter circuits. While this system does not suffer from a limited fuel supply it does require a gravitational field to function. Maximum unassisted velocity is rated at 141.5km/h. The flight system can be supplemented with external boosters when necessary.

Recent contracts with Paragon City have given Novatech Industries access to the Mediport™ system. By accessing a hero's unique Mediport™ ID code Novapulse can teleport them to his location. When used in conjunction with Novatech's Absolute Positioning System (Next generation GPS) The armor can also teleport short distances.

The outermost armored layer is embedded with a crystallized carbon-composite which can be polarized when exposed to a specific electrical field. This composite material has the ability to refract light (and most other EM emissions) bending it around the surface of the armor making it difficult to detect except at close-range. Selectively changing the refractive index also grants the ability to change the perceived color of the armor, a useful if somewhat trivial application.

When required the armor can be shifted, partially or completely, out of phase with our normal space-time rendering it completely invisible.

The armor is equipped with a nanotech-based self-repair system. Damaged systems can be partially or completely rebuilt using multiple sequential applications. In case of pilot injury, the armor also carries a generous supply of nano-doctors. These can be projected externally to aid in the repair of the injuries of allies. Because of the generally complex nature of both the armor's systems and biological life, no other system resources can be accessed until the repair cycle is complete.

In cases of critical injury the armor's secondary systems can be modulated to act as a defibrillator.

Without the Novapulse armor, Andrew has no superhuman abilities.

Following the death of his father Andrew Carter took over as CEO of Novatech Industries International, a strong up-and-comer in advanced high-tech research and development. Three months later the earth was plunged into war with the Rikti. Looking to assist in planetary defense he fast-tracked the creation of a prototype Novapulse Tactical Battle Suit as a field deployable combat platform for military use against the Rikti threat. The amazing efforts of earth's defending heroes ended the war before prototype was completed, and the project was mothballed. In an effort to reclaim some of the resources spent on the project, Andrew was eager to unveil several important breakthrough technologies that would finally allow Novatech to gain a foothold in the Crey dominated technology market. Unfortunately before the public announcement , the main Novatech research lab was decimated by a massive clockwork attack. Unable to just stand by as his employees were attacked, Andrew donned the prototype armor and assisted his security forces in destroying the invaders and rescuing his staff. Unfortunately casualties and damages were heavy. He collected the damaged clockwork and was able to rebuild a partial database. There was enough information to show that a 3rd party had programmed these replicas. Determined to find out who was behind the attack he turned his still considerable resources to finding the source. Updating the Novapulse armor with the latest technologies available to him, Andrew traveled to Paragon City to begin his search.

Obviously this is my Iron Man homage character. Novapulse