Jason Tod Dyson was born into the world of superheroism. His father, a mutant in a military superpowered unit, had a very highly advanced spatial recognition mutation. This meant that he rarely missed when he fired pretty much any type of projectile. His mother had just attained her position as detective when she found out she was pregnant. When Tod (both father and son shared the first name Jason, so it didn't take long for the child to start being called his middle name) was two, Jason retired from the military and devoted himself to the task of stay at home dad (something not quite as popular as it is now, and something a military man wasn't expected to do) so that Kassandra could pursue her career.

Jason, taught archery by his father, something of a family tradition, took up the bow and arrow as the superhero Artemas soon after his brother disappeared. Though at first this caused tension between Jason and Kassandra, the fact that they were both still able to be there for Tod eventually cooled Kassandra's objections. Kassandra, due to her relationship with a superhero, was often caught up in superpowered cases. Tod, the child of a superhero and a Paragon City detective, heard bits and pieces and as he grew up, he began to see himself as something of an "amateur expert" on superpowered affairs.

Tod's passion was photography. He learned this in school when pursuit of extra credit had him picking up a camera for the project. It soon became his passion, joining art clubs for photography, joining journalism clubs for photography, and later yearbook and school newspaper were a given in high school. Life was relatively normal for the small family, going through their lives despite Jason's involvement in superheroics.

That would change when Tod was twelve. Kassandra was working on a case when she disappeared. Following up on his wife's disappearance, Jason as Artemas tracked her down to a warehouse. However, she was dead, bait in a trap. Jason was knocked unconscious by an unseen assailant. Fortunately, he woke up an hour later, apparently (relatively) unhurt. Only his arrows were missing, which he thought was odd, all that effort for a handful of his arrows. Tod took his mother's death hard on the inside, but on the outside he seemed to take it very well. His passion became his obsession. Photography was a thing to lose himself in.

Both men grieved, father and son, but life returned to a routine. Both lost themselves in their work. Life went on. Then the second major event in Tod's life happened. His father gathered information about another Artemas going around sullying his good name. First he thought it was merely an imposter, but a confrontation revealed it to actually be another him. Captured and brought to various organizations for answers, it was clear. This was a clone, with slightly altered DNA. With this information, a few leads, and a few discovered connections to the incident of his wife's death, Jason, Artemas, went out to seek more answers, and renewed his vow of revenge on those who killed his wife.

But the Rikti War broke out. Trying the dual responsibilities of tracking his wife's killer(s) and helping deal with the Rikti was stressing him out, though he refused to show the effects to his son. It was during the Rikti war that Artemas, like so many others, disappeared, presumed to be dead. Tod took it well enough, on the outside. Custody was granted to his Aunt Judy and her domestic partner.

To deal with this second loss, Tod got a part-time job after school as a freelance photographer, primarily for the Paragon City Tourism Bureau. He eventually, despite his schooling and alongside his photography, picked up his father's spare bow and the arrows from the machine his father built to produce them. He took on his father's name of Artemas and vowed to find out what happened with this mess of his life. His mother's death, his father's clone, his father's disappearance and possible death.

It wasn't long after this and his enlisting in the United Paragon Academy that another major change came. Tod dropped some arrow shafts into the machine and typed in the order for the day when the machine exploded. A trap had been set to take care of the budding hero in an attempt to squash future problems before they even started. It was at this time that the Nictus responsible was fought and defeated by a Peacebringer investigating the explosion. Though the Peacebringer, both Kheldian and human, was killed, the Nictus's host was fatally injured and so the Nictus possessed Tod, who was severely injured, but in no actual danger of dying since the explosion would attract the attention of medical aid.

The Nictus whispered its seductions to Tod, skilled in converting hosts to its cause. However, Tod proved to have a strong will, further tempered by his losses. In the end it was Tod who converted the Nictus to his cause and the two joined with each others' consent. It was at this point that Tod woke up from his three-day coma, in a room guarded by a policeman, a Longbow agent, and a Warshade. It was this Warshade who, after determining that Tod was not seduced to the dark side, introduced the new joined being to Shadowstar. 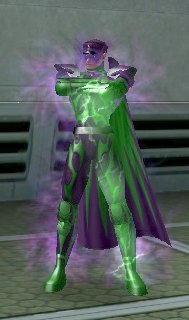 At first, Tod rushed to help Shadowstar investigate some things, not quite ready to go back to his old life. Even after he began to mingle with his former associates and friends, he went through a sullen phase which, in keeping with Tod's tendency to take things in stride, didn't last very long. Tod and Enlightened Darkness, under the joined name of Nox Fox, soon came out of his funk and returned to his life as a hero, a student, and a photographer. Though Enlightened Darkness refuses to identify its previous name, stating that it already has enough prejudice as a Warshade to throw its war crimes out to everyone who doesn't need to know, it fully admits it has done wrong, however vague its admissions might be.

Enlightened Darkness admits few details about itself. It is known that it was born on Earth approximately fourteen centuries ago. It is known that it was involved with the Council in recent history. Though it was born on Earth, it is known that it has been elsewhere, not all fourteen hundred plus years of its life was spent on Earth. Based on its age and birth planet along with various tidbits it has let slip, it is possible to trace its identification to the Nictus known as Hope's Eclipse. The name described the Nictus's personality quite well, as its mode of operations primarily dealt with putting people into a situation in which all hope seemed to have been lost, and then prolong that situation for as long as possible. How a young human was able to turn the sadistic Nictus from its dark path is still much of a mystery. One might believe that the Nictus was deceiving Tod, but anyone who digs into the Nictus's intentions invariably comes to the conclusion that the Nictus's desires of redemption are true.

Tod is a photographer. It is his primary passion, aside from bringing Justice to the world via crime-fighting. While attending college, he also works for a tourist bureau, photographing Paragon City and its residents.

Tod was the drummer for several bands in high school as they formed, reformed, broke up, and formed again. He still plays, though he is not permanently attached to any band, mostly sitting in when a drummer for a band can't play for whatever reason. Tod also learned how to play the piano when he was younger. While he wasn't very practiced anymore, Nox Fox has been a pianist in previous mergings. Including Nox Fox's other hosts, he can play the drum set, piano, alto and tenor saxophones, clarinet, oboe, violin, cello, and lute. While the Nictus's abilities are rather mechanical in nature, Tod gives the music heart and flare.

This was the Nictus's primary area of expertise. Nox Fox still retains the full experience of interrogation, seduction, and torture and could use it if he were so inclined. Given that Nox Fox often goes a little too far in his activities, it's not beyond the realm of likelihood that he could stoop to such tactics if he feels he needs to know something.