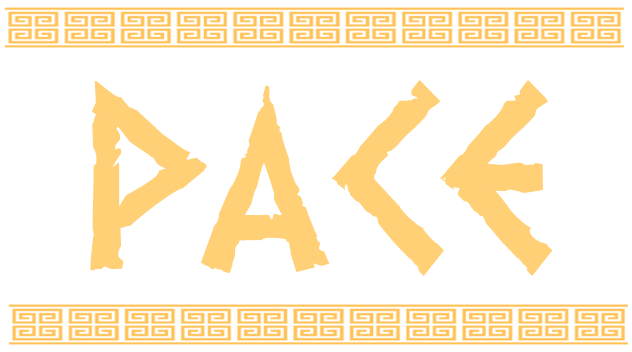 "I've partied with the god of wine, shaken hands with the Lord of the Underworld, and stood toe-to-toe with giants.
What makes you think I'm scared of a gangbanger with a gun?" 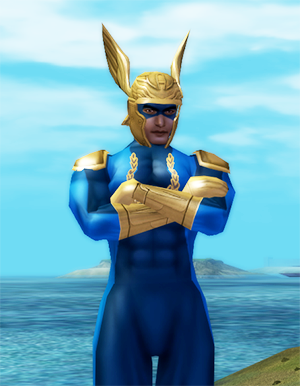 Equipment: The Helm of Hermes

Raised by his single mother, college student and track star Tyler Vega and his friends took a vacation in Greece shortly after graduation. While there, the group went hiking and came across a historic landmark - an ancient Grecian temple on Mount Cyllene in Arcadia being defaced by drunken thugs. Initially, Tyler and his friends attempted to break up the disturbance but once the thugs brandished their weapons, his friends ran away. Defiantly, Tyler attempted to fight them all but the numbers game was too much and he was brutally beaten. Until something happened.

"It was like time stopped and and my spirit left my body and floated upwards as I had this legit, out-of-body experience. I mean, I've never been religious or anything but in that moment I prayed to any god that was out there. And then this guy with an epic beard came strolling along..."

Casually dressed but with a face that seemed out of time, the man declared he was Hermes, the emissary and messenger of the Greek gods and that Tyler's prevention of the temple's defacement hadn't gone unnoticed. Furthermore, Tyler's bravery had earned the god's respect and that if he promised to continue down the path he was on, Hermes would bestow a portion of his power unto Tyler. He accepted.

Physically restored and imbued with the power to move at superhuman speeds, Tyler easily dispatched the thugs and returned home, to Paragon City, to uphold the laws of truth and justice as Pace, the fleet-footed champion of the gods.

Well... until he met Dionysus anyways.

"So I'm at this mixer at PCU, right, and this big hairy drunk dude comes wobbling over to me, says 'I'm Dionysus, god of wine and fertility!' then drops a bomb on me."

As thanks for rescuing one of his many offspring from the clutches of an evil sorceress, Dionysus (drunkenly, of course) revealed that everything Hermes told Tyler had been a lie. The circumstance of his being bestowed his power had been the result of a wager between himself and Hermes. The two gods bet on which of Tyler's group would be the bravest. Hermes in fact, voted against Tyler.

Tyler confronted Hermes, who nonchalantly admitted to his part in the wager. Tyler challenged Hermes to a footrace for the right to keep his speed, and tricked the god into running backwards. Respecting Tyler for his trickery, Hermes allowed him to keep his power.

Superspeed: Pace possesses a portion of Hermes' power, that allows him to run at extremely high speeds. He is able to think, act, move and perceive far faster than that of an ordinary human. He is fast enough to dodge gunfire and by running in circles or rotating his arms he has created cyclone-like gusts of wind which are able to knock men off their feet. He is also able to effortlessly run across water and up vertical surfaces. Moving at such a high rate pf speed makes him appear as little more than a blur.

Superhuman Stamina: Pace is able to physically exert himself without consequence far longer than an ordinary person. While his limits have gone relatively untested, he's ran for a full 12 hours without becoming fatigued.

Kinetic Energy Absorption & Manipulation: Pace is able to create a kinetic field of mystical energy around himself which absorbs all kinetic energy directed against him. This absorption can vary from resisting the effects of physical objects such as bricks and rocks to resisting that of energy and fire and even explosions. He is then able to release the stored kinetic energy in various forms, such as concussive blasts or waves powerful enough to throw men a hundred yards away.

The Helm of Hermes: When worn, the helm grants the wearer enhanced senses such as sight and hearing and allows its wearer to telepathically contact anyone, anywhere in the world unless they are unconscious or somehow shielded. It also grants the wearer the ability to sense pure evil and see through magical illusions to a degree. 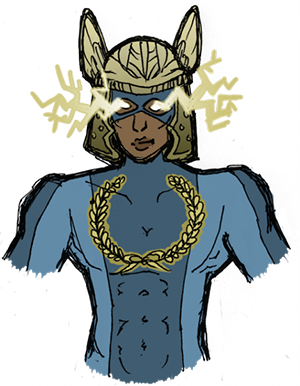 Getaway: Virgil Bowers, rival speedster empowered by Hermes to "keep Tyler on his toes". Uses his speed for crime. Also, kind of a dick.
The Sirens: Adelpha, Alethea, and Alphea - Three seductive sisters who use their vocal powers of persuasion to compel men to give them whatever they want. Cars, clothes, jewelry. Depends on which day of the week it is.
Agamemnon: Nico Diakos, a Rouge Isles-residing gangster with superhuman strength who's convinced he's descended from Greek royalty. Owns The Archimedes Casino in St. Martial. Yes, the one with three different strip-clubs inside.
Diamond King: Warren Ellison, professional jewel-thief who, after stealing the fabled Awazaki Diamond, possesses the ability to transform his body into a super-dense, rock-like material. Not actual diamond though, despite what he claims.
Medusa: Rhea Young, a metahuman with the ability to physically paralyze anyone who meets her gaze. Not a woman you want to cross.

Of Monsters and Men - Tyler comes to face to face with a monster. And a cyclops.
Shortcut - While rescuing a missing woman, Tyler gets sidetracked.

"Devil's Whisper" by Raury
"Better Hide, Better Run" by The Glitch Mob
"Fall Back" by DUCKWRTH
"I Disappear" by The Faint
"Black Magic" by Band of Skulls
"Black Sun" by Congorock
"Six Days" by DJ Shadow ft. Mos Def
"Unshaken" by D'Angelo