Spirit of the Row

The Row is at least vaguely aware of most heroes who operate in his territory for longer than a week. He seldom manifests in "person" to any but the most established, but has been known to give subtle and apparently coincidental aid - loose bricks, unlocked doors, informative ads that appear in discarded copies of the Times, etc.

The Row is also part of the greater fellowship of Paragon City's neighborhoods. He is on good terms with the spirits of Galaxy City and Independence Port, misses Perez terribly, and remembers better times with Skyway. His relationships with City Hall (Atlas Park) and Steel Canyon, however, can best be described as "strained." He has little contact with the rest of the city.

The spirit of Kings Row embodies all that is and ever has been part of the district - the people, the architecture, the fortunes (good and bad), the history and "character" of the neighborhood. The Great Depression was a defining period in the life of the Row, and left marks on the zone and its soul which linger even today.

The Row is the plumber who spends all day fixing other people's sinks and toilets. The Row is the cop counting the days to retirement as he responds to a domestic dispute between a couple he knows well enough to get Christmas cards from. The Row is the homeless woman crooning to herself in an alley. The Row is the unemployed welder looking for a job, any job, that hasn't been sent overseas. The Row is the immigrant family who came here with nothing but the shirts on their backs, looking for the American Dream. The Row is the mother working two jobs and trying to keep her boys in school, out of the gangs, and off drugs. The Row is the garbage man who keeps a baseball bat in the cab of his truck to deal with Clockwork and the occasional Skull. The Row is the elderly couple who've been together sixty years, and who will die within a week of each other. The Row is the little girl who prays every night that Daddy will find work and stop hitting Mommy.

He is tired, and bruised, and sometimes just a little desperate. He gets angry. He has a drinking problem. And yet, despite all he's been through - the heavy burdens, hard knocks and tough times that never seem to end - he doesn't give up. Maybe he doesn't know how. Maybe he's just too dumb and stubborn. Maybe, under all that armor, there's still a heart that cares.

Maybe that's the saddest part of all. 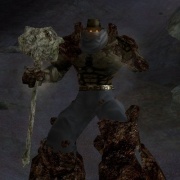 The spirit of the Row is able to manifest itself in the physical world by creating a body out of convenient and familiar materials - brick, concrete, stone, asphalt, loose trash, and so on - and filling this vessel with a portion of its essence. The resulting avatar somewhat resembles a golem, earth elemental, or similar magical construct; its eyes are hot coals, glowing a bright orange-red in the shadow of the fedora's brim. Under normal circumstances, the spirit may leave this body at any time (allowing it to collapse back into a large heap of inanimate rubble) and form another.

The avatar is linked to, but does not contain, the larger totality of Kings Row. It is a focus of awareness, similar to the distinction between what a mortal is concentrating on and everything else that they perceive in the background. Damage to the avatar does not affect the condition of the Row as a whole, but the opposite is true; if something big happens in the Row, the portion of its spirit within the stone form will feel it instantly.

The Row's form is at least as hard and durable as normal stone, probably more so due to the nature of the spirit inhabiting it ("hard" and "tough" being essential qualities of the Row). When damaged, the Row can repair its avatar by drawing on the surrounding earth.

The Row hits like a ton of bricks, literally. (Okay, maybe just a half ton. It still hurts.)

The Row is capable of not only dissolving and reforming its avatar in a different location, but can also pull other beings (both friend and foe) through the spirit world to its side. This is often surprising or even traumatic for those who have not previously seen or entered that realm.

The spirit of the Row itself appears in the spirit world and to those with the Sight as a large man dressed in the style of the 1930s. Some have reported seeing him in black and white, or surrounded by a faint aura. His spiritual presence is quite strong, especially within his own domain; those who encounter him on that plane will be immediately aware that he is more than an ordinary mortal.

The Row can endure considerable punishment and keep going (mostly due to long practice). He has seen much and is difficult to shock or surprise, let alone intimidate. He has a prizefighter's knowledge of where and how to hit someone to make him go down fast. He is a fair detective, with an eye for detail and access to senses and sources beyond the human. Finally, he is incredibly stubborn; once he commits to some cause or action, nothing can stop him from seeing it through, only hinder or delay him.

The Row is gruff, blunt, crude and abrasive, especially to those he doesn't like; a loyal friend, but hard to get along with unless one is of similar spirit. The Row is often indifferent to the plight of those who aren't from the neighborhood, unless it's something that affects the whole city - the Row's got to take care of its own, 'cause who else will? The Row does not like outsiders coming in and messing things up; this includes eager-beaver rookie cops who don't "get it" yet and rising-star heroes who are here one day, gone the next. The Row does not forgive or forget, and has a list of grudges longer than Industrial Avenue (with Steel Canyon at the very top of it). The Row has a tendency to brood, even when it's not drunk.

The Row's avatar is much weaker when outside Kings Row proper, and cannot manifest at all beyond the city limits (so no trips to Salamanca, the Rogue Isles, or the Shadow Shard). The Row is more vulnerable to spirit traps and similar devices than an ordinary mortal firmly anchored to a living (not constructed) body of their own. His stone form is extremely heavy, and cannot swim. Finally, while the spirit of the Row is not greatly inconvenienced by the loss of its avatar, attacks (physical or otherwise) on the neighborhood itself will hurt and weaken it.

As a manifested spirit, the Row has no equipment or possessions other than its usual garb, modeled after the pulp heroes and mystery men of the Early Modern Heroic Age.

Faces of the City

By the Pricking of My Thumbs