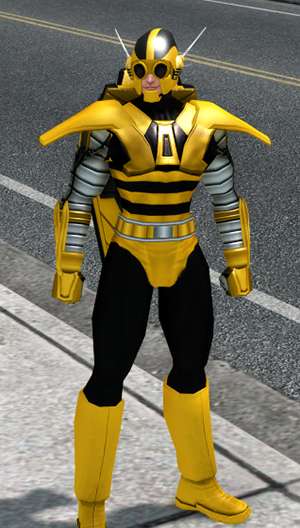 Born in the slummiest of slums in Paragon City, it was clear from childhood that Wesley Wilkinson was different. Frequently caught taking complex devices apart and reassembling them at an extremely young age, his parents were in constant awe of the wunderkind they’d managed to produce. As a kid Wesley would always be building or inventing some doodad to make his parents' lives easier around the house. Recognized by his peers as a prodigy it was clear that young Wesley had a bright future ahead of him. He’d be the first in his family to graduate college. To the surprise of no one who knew him, Wesley earned a scholarship and a full ride to the university of his choice. He chose to stay in the city however to support his poverty-stricken parents. When he graduated, they couldn’t have been more proud. With a degree in engineering, the hard-working Wesley’s faith in his bright future and success was assured.

Until life slapped him in the face.

In a city full of super-geniuses, both natural and enhanced, Wesley’s degree meant very little. Every tech company he applied to applauded his strong application but claimed he “lacked necessary experience”. His long-time girlfriend encouraged him to keep at it, that eventually his talents would be recognized and he’d gain employment at some corporation like Crey or Aeon. But after being turned away so many times, the cynical and disillusioned Wesley lacked the faith in his future that his lover shared. The faith that he once possessed as well. Until the fateful day he picked up a certain magazine.

"The Nation’s Richest Entrepreneurs" highlighted the biggest and most successful developers of technology in the country. Inspired by the tales of their similar humble beginnings, Wesley had an epiphany. Why try and get a job at the bottom when he could make it on his own? He’d invent something! He’d make big business come to him. He’d build his own fortune!

Then life slapped him in the face again. Repeatedly.

Nearly all his inventions failed to catch on. Laughed out of every office he entered and turned away by every investor he met with, they noted that all his ideas had already been trademarked and marketed by others. Not only that but they were all far more efficient. Again, Wesley had been forcibly served a reality check. After years of her encouragement and advice being ignored, his girlfriend broke up with him. The loans he’d applied for to fund his inventions left him crippled by debt. Wesley’s dreams of making more himself were shattered. To get by, he was forced to take a low-paying job in a factory. The same factory his father had been working in since Wesley was a child.

Lamenting on the woeful turn his life had taken, it was a simple news special on television that turned Wesley’s frown upside down. ‘Interview with a Supervillain’ the life and times of King Calamity, the natural disaster-creating knave who’d plagued the city for decades before being incarcerated. From his birth to his rise as a supervillain, his imprisonment, and finally his redemption and his claim that in the end, crime doesn’t really pay.

Unfortunately Wesley turned the interview off before that last part.

Reinvigorated by inspiration, Wesley figured that if gainful and legitimate employment weren't in the cards for him, ill-begotten and unlawful gain it was. He suffered no delusions of grandeur however. He didn’t aspire to become a super-villain. No, he’d aim lower. Thievery would suit him just fine. He used his mechanical know-how to create an armor plated, mechanical suit and embarked on a criminal career as The Buzzer.

The Buzzer armor's made of a magnesium alloy, and enhances Wesley's durability and strength to the point that he's able to lift at least one ton. It allows Wesley to fly as well as stick to walls and his helmet contains a battle computer and heads-up display that's capable of analyzing an opponents fighting style and capable of predicting countermeasures. The gauntlets house miniature sonic cannons that project a concentrated stream sound ranging up to at least 100 decibels. The gauntlets also possess Wesley's own patented 'Stinger' offensive ability; an intense electrical discharge capable of shorting out electrical systems or shocking enemies into unconscious.
Retrieved from "http://www.virtueverse.net/wiki/The_Buzzer"
Categories: Rogue | Blaster | Everlasting | Male