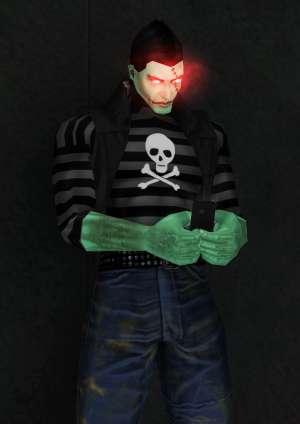 It sounds clićhe, but his story is not for the faint of heart. It's a boy meets girl story, sure. But one you've likely never heard before. Fletcher "Tuesday" Carlson was born in Skyway City, Paragon. A model of cold concrete and steel - a soulless passageway on the way to more interesting destinations, Skyway City was one of the few less cared for areas of Paragon. While not as run-down as Kings Row, there's a strong possibility that it soon might be. A few years later, his younger sister Sadie was born. With hair as golden as daisies (in stark contrast to the rest of her family's naturally dark hair), Sadie stood out like a sore thumb. But in the best way possible. Cute as a button and full of energy, she epitomized the 'golden child' archetype. Fletcher was more proud than jealous.

So when Sadie was clipped by a drunk driver on her way home from school, the family was devastated. Her funeral was on a rainy afternoon. Tuesday never truly recovered.

Armed with a razor wit and a personality as dark and depressing as the metropolis he called home, Tuesday's increasing cynicism alienated him from most of his school's student body. He maintained a very small circle of friends throughout high school, though his dreary personality would often rub them the wrong way.

And then, one night, he stumbled across Maria Harper. They met during a Neverdead show; a post-hardcore indie rock band, rife with guttural guitar chords and murderous lyrics. Their eyes met through the hazy fog of the dingy club and that was it. Tuesday had immediately fallen for her. She very well could have been the spark that lit the fire; the one to pull Tuesday out of his listless slump. She was that kind of girl. With deep and dark eyes, enticing and inviting, she was the one to make the first move. The two stuck together for the rest of the night, chatting and laughing together. With surprisingly similar interests the two headed back to her place after the show to "compare record collections".

Things got hot and heavy after the two had a few drinks, suddenly records seemed very unimportant . Unfortunately, Maria neglected to mention she was currently in a relationship. Her thuggish significant other wasn't happy when he stopped in to surprise his girlfriend. He'd been drinking too. Tempers flared and it wasn't long before things got physical. Tuesday tried to split while the two were arguing, but the boyfriend was blocking his only exit. Enraged by his girlfriend's infidelity he pulled a knife and stabbed Tuesday as he made his way towards the door. Lights out. Fade to black.

A haze of chaotic urban sequences flashed through his brain – a series of macabre visions darkened by the creeping dread of infestation and the smell of rotting flesh. When he finally awoke, it was to escape claustrophobic hell, to leave behind a bleakness so genuinely upsetting that it took him several minutes to recover his senses. Rising from the dead'll do that to you.

Standing over his body (or corpse?) was a would-be Circle of Thorns mage. His robe was open and Tuesday saw his office attire. The guy was clearly not a member yet. Apparently, resurrecting someone was part of an initiation ritual. Lucky Tuesday. He ran off when he realized he screwed up the spell and Tuesday wasn't under his control. For what must have been a half hour, he laid next to his grave, staring up into the inky black sky as he tried to get a grip.

Later, he stumbled back to his home to discover he'd been dead about a year. His parents had left his room and his things untouched. And while he scrounged through his possessions, he could only wonder if they'd ever be able to get over his death. During his furious attempt to dress he caught sight of himself in a mirror. His skin had naturally grown pale and dozens of stitches covered his body. It was then when he decided that he wouldn't return to his parents. Coping with the death of two children is hard enough without having to discover one of them is now undead.

Rather than seek out his killer and bring him to justice, Tuesday was more concerned with finding a place to stay. He found that becoming undead wasn't exactly as bad he initially thought it would be. He no longer required sleep or food. The cold weather didn't bother him. Most of his nerve-endings had gone dead. Pain was officially irrelevant.

Perhaps the best part of being dead is the ability to die over and over again. Knowing he's virtually immortal allows Tuesday to throw himself into the line of deadly fire so his less immortal friends can live.

Retained Consciousness: Although Tuesday is a zombie, he differs from other zombies. For reasons unexplained, his spirit never fully left his body at death. As a result, Tuesday can't be controlled or physically manipulated in the ways your average revenant can be.

Immortality: Tuesday does not require food, water, heat, or oxygen for sustenance. His body won't degrade beyond the state in which it was initially resurrected. He can't be poisoned and can easily survive toxic conditions deadly to anyone else.

Superhuman strength: Like most revenants, Tuesday possess a far greater strength level than the average human being. This is likely due to his denser muscle mass and the fact that he doesn't suffer from other effects that usually accompany physical exertion.

Regenerative healing factor: Tuesday's lifeless and reanimated body possesses a superhuman healing ability that allows him to rapidly regenerate damaged bodily tissue. His healing powers are sufficient enough to fully recover from burns, lacerations, broken bones, and gunshot wounds within the span of a few hours. Not truly alive, Tuesday no longer feels pain and immune to certain other mortal vulnerabilities.

Limb Reanimation: Tuesday can animate and mentally command parts of his body even after they have been severed.