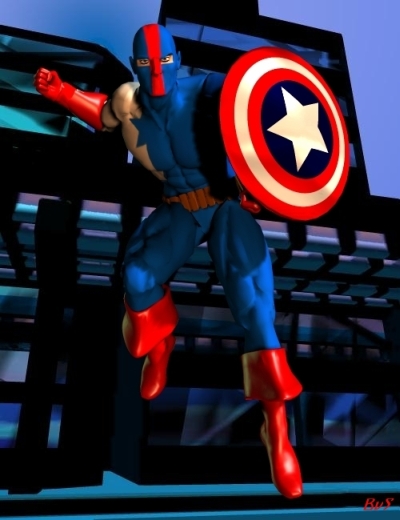 Nathan Ciavarella, aka Radical Justice is a superhero that operated in Paragon City from 1998 onwards. He is often considered to be the first protégé of Xanatos.

Nathan Ciavarella gained his powers at the age of 18, after a freak road accident that almost cost him his life. Nathan had unwillingly run over a superhero, and in time honoured superhero tradition, would have to take the mantle of the man he had slain. The hero Nathan killed is anonymous. And his real identity has never been revealed. Though it is believed his powers came from the shield Nathan found next to his body.

The shield enhances all of its bearers metabolic functions and prevents the build-up of fatigue poisons in his muscles, giving its bearer endurance far in excess of an ordinary human being. This accounts for many of Radical Justice's extraordinary feats, including bench pressing 1100 pounds (500kg) and running a mile (1.6 km) in little more than a minute. Radical Justice is also unable to become intoxicated by alcohol and is immune to many diseases, as he also heals faster than normal.

Radical Justice is also a master of multiple martial arts. Years of practice with his indestructible shield make him able to aim and throw it with almost unerring accuracy. His skill with his shield is such that he can attack multiple targets in succession with a single throw or even cause a boomerang-like return from a throw to attack an enemy from behind.

Radical Justice met the hero Xanatos during a mafia raid on a Crey Laboratory. After disposing of various button-men and assorted mafia muscle. The two heroes realize they have one thing in common: Their utter belief in Truth, Justice, and Liberty. The two heroes quickly become friends.

It was in December 2001 that Radical Justice formed The Defenders of Paragon with his brother Shocstream and heroic mentor Xanatos. This group has become something of a powerhouse in Paragon ever since, involving itself in numerous interstellar wars & battles with various villain groups throughout the city.

In early 2002, Radical Justice quit the team due to the death of his brother, Shocstream. He returned later that year to assist The Defenders against the super villain Sovereign. Suffering two broken arms in the conflict, Radical Justice has been out of action ever since. It is believed that he has returned to civilian life.