Ace's chest insignia (depicted in-game as a diamond).
During the original Rikti invasion of 2002, 12 year old Michael Schwarz was trapped in a park, under fallen debris. He was rescued by Manticore and carried to safety in an ambulance. He was reunited with his parents shortly thereafter, but was unable to shake what he had experienced, and was especially fixated on his brave rescuer.

Ace is an extremely intelligent young man, who gradiuated high school at 16 and is currently enrolled in Paragon City University. He is a huge Manticore fan, hence his interests in archery and gadgets. As with just about anything he takes an interest in, he excelled at the sport and decided to take his hobby to the next level by becoming a super hero.

He outspokenly hopes that Manticore will take notice of his ability and pass the mantle on to him when he retires. Though this is unlikely, Ace has clung to the hope incessantly. Lately, however, he is coming into his own more as a hero and is starting to let go of his fixation on becoming Manticore's successor. If anything, this may prove to catch Manticore's interest more than before.

Ace is a very talkative, excitable young man with an offbeat sense of humor. Like most kids of his particular ilk (read: nerds), he enjoys things like Monty Python, Dungeons And Dragons, comic books, and video games.

He is very inquisitive and fascinated by any kind of gadget or device, no matter how mundane, and his mind is constantly going several directions at once, which can make conversing with him very difficult, as he skips back and forth from topic to topic at the drop of a dime, though he always gets back to the original topic relatively soon.

He enjoys rummaging through salvage racks for odd pieces of mechanical junk to tinker with, and has recently found that his ability to make just about anything from random parts is really only limited by how much he has available to work with.

He is also quite tenderhearted, and has spent a lot of time trying to bond with fellow heroes.

Ace possesses a 194 I.Q., which makes him very quick of the mind. He applies his mental capacity to tinkering and inventing, as well as deduction, problem-solving, and general scientific inquiries.

He is also very proficient with the bow, and uses a customized compound bow mounted with a laser sight. He uses an array of arrows for different purposes. The standard ones are tranquilizers that have a teleport beacon attached to transport the targets to holding cells at the nearest branch of the Paragon City Police Department central booking office (though the drug isn't quite strong enough and he can sometimes go through two or 3 arrows before the target is down).

Ace is a normal human teenager with no special resistances or immunities. He's not exceptionally well-built, so his physical strength is not very impressive. He possesses no immunities to psionics, psychic attacks, or other such mind-probing powers. He also has a strong desire to prove himself, which can sometimes get him into trouble. 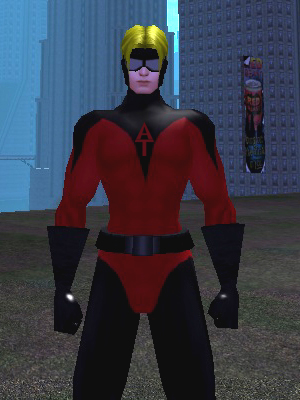 Ace in his recently-adopted second costume.

Ace uses several items in the field to aid him in his work:

Ace is currently a member of The All Star Teen Sentinels.

He also volunteers as a reserve operative for Longbow.

MAJOR RETCONS COMING FOR THIS SECTION!

Ace has started to form close friendships with several of his teammates. 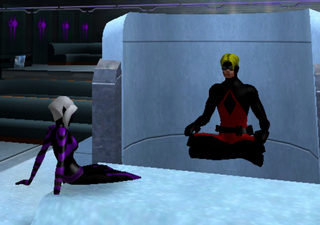 Ace spending some time with "Harley".

The Twilight Harlequin - "Harley", as Ace calls her, is a beautiful, diminutive alien humanoid from a world called A'verelm, covered from head to toe with intricate tattoos, who Ace is romantically involved with. To call them boyfriend/girlfriend would be a gross understatement. It is much more accurate to say that they are true soulmates, bound to each other even from across the stars. Keal'ye is his best friend and truest companion, and their love for one another gives them a strength that others cannot fathom.

{{Current roleplay note: Recently, their teammate Bouncing Jack was corrupted by the Carnival of Shadows, and he, in turn, corrupted Harley. Ace and his teammates De-Frag and Kid Regal thwarted an attempt by Jack to sabotage base equipment, then Jack captured and corrupted Harley the next day. Jack and Harley confronted Ace in the Rikti War Zone, and Ace brought Zeiban in to help him attempt to reason with them and hopefully break the Carnies' hypnosis. Instead, when Zeiban and Ace tried to reatrain the two, it was percieved as an attempt to attack and Harley attacked Zeiban with an EMP bomb. Ace rushed Zeiban to the ASTS base, where she died. Jack and Harley followed Ace in, and while Ace and Jack worked to revive Zeiban, Harley was overcome with grief at what she had done and took her own life. Ace and Jack managed to restore Zeiban, but Zeiban was unable to restore life to Harley. Ace, in turn, took a scalpel and threatened to kill Jack, but Zeiban told Jack to leave before Ace could make good on his threat. Ace holds Jack personally responsible for what happened, and Jack holds Ace and Zeiban responsible. Ace made a personal vow to see Jack dead, and the two were actively hunting each other, however, due to a spell cast by his teammate Heat Zap, Ace was able to visit Harley astrally and he promised her to not continue his vendetta. This has not stopped Jack, however. Ace's ex-teammate, Reichsmaiden, led Ace into a trap of Jack's, where Ace willingly planned to let Jack kill him for the sake of Jack leaving his teammates alone. However, Bodkin-Girl followed Ace and intervened, though suffering a broken hand and cracked and bruised ribs at the hand of Reichsmaiden. Jack and Reichsmaiden fled after Sentinel of Twilight and Zeiban arrived to rescue their wounded teammates.

The grief caused by Harley's death deeply affected everyone on the team, but Ace himself, obviously, was hit hardest of all by it. The events caused him to mature considerably, though he outwardly strives to appear unchanged.

He was unable to get any closure from Jack's eventual arrest, and opted to discretely leave town while the rest of the team was occupied with other things. When he returned, he was still a bit bitter and angry. This was sated for a bit by his short-lived romance with Bodkin-Girl until she ended it a mere two weeks later. He was in a sorrier state than he had been before, overcome with feelings of loss and hopelessness he hadn't allowed himself to fully deal with before. He descended into a cycle of heavy drinking and eventually sought to go to rehab and get grief counseling. Upon his return, he was greeted by a resurrected Harley, who expressed her forgiveness to him. The two are currently planning their wedding.}}

American Promise - Mike and Regina are like the supergroup's male/female version of Turk and J.D. from "Scrubs", but nerdier. After the death of Twilight Harlequin, she had been the biggest source of comfort for Ace, willingly supplying a shoulder for him at any and all times. Ace has recently taken to occasionally calling her Gigi when the mood hits. The two often bond by playfully hurling racial epithets and stereotypes at each other, bonding through being minorities on the team, her being the only black person and he and Ahem being the only Jews. They often joke that they should rally all the non-WASP heroes and form a "Minoriteam". She is heartbroken over her unrequieted love for Ace and his brief (and failed) relationship with Bodkin-Girl, however, and has been a bit withdrawn lately, throwing herself into her heroing to take her mind off her feelings.

De-Frag - Nerds tend to gather in groups. Completing the trio of geekdom in the ASTS is De-Frag. He, like Ace, is a tinkerer and mechanical genius. Ace, Promise, and De are essentially the team's equivalent of an AV club, though De isn't as far gone as the other two. Zeiban is only exempt from this because she isn't as unabashedly nerdy as the other three.

Bodkin-Girl - Mike has always respected Jen considerably, and the fact that she's the pupil of Captain Crosshairs, he feels, speaks leaps and bounds about her. He admires her skill as an archer and felt for a long time that she may feel he was stealing her thunder as the only archer on the team when he joined the ASTS, but the two have developed a strong friendship since Harley's death. He's taken to calling her Boddie or Jenny, depending on the situation, and has become very attached to her, especially since she recently risked her life to save his. They had a brief romance that ended awkwardly, but Ace harbors her no ill will and still cares deeply about her, and would willingly put his life on the line for her.

Sentinel of Twilight and Zeiban - Ace has come to see "Twi" and "Zee" as sisters, and has very different relationships with them both; Zeiban being a confidant and support system, and Twi being the one that Ace has playful rivalry with. He has said on a few occasions that he loves them both, and he would be at a loss without them. Zeiban, in particular, has helped Ace out of more than a few tight spots, saving Harley's life on more than one occasion.

Ace's parents and sister relocated from Paragon City to Providence after he started college, claiming they wanted a smaller house and a lower cost of living. In actuality, they haven't felt safe in Paragon City since the first Rikti invasion, but wanted to ensure that he was in college before leaving to help him transition in more smoothly.

When Ace is in his civillian attire, he is unrecognizable as Ace except to those few who are privy to his alter ego and have seen him out of costume. These people are aware that his identity is to remain secret, and so do not refer to him as Ace, if they even speak to him at all, when he is in his civvies in public.