Though she claims to despise being told what to do as a result of her association with Longbow agents directing her undercover activities, as well as taking orders from her Arachnos superiors, Agent Estrus is a follower. She has little desire to lead and often seems apathetic about self-motivation. She spent close to a year as a soldier of Arachnos, much of which she was assigned as a personal guard to high-ranking individuals who took advantage of her sexually --including loaning her out for "favors" or putting her on display in depraved sex shows for elite personnel. As such, she has little in the way of personal dignity and is capable of acting shamelessly with the same ambivalence she would in purchasing a cup of coffee, brushing her teeth, or any other mundane activity. After returning to Paragon City, she has taken up the role of costumed hero to help her cope with the things she did in the Rogue Isles, including her participation in several criminal acts.

Agent Estrus has no true super powers, though she did recieve some training from Longbow psi-agents before going undercover so that she could conceal her thoughts from any telepaths employed by Arachnos. This takes the form of focusing on positive memories from her childhood, such as her pet bunny rabbits.

After her Longbow crash course in espionage, Agent Estrus was recruited by Arachnos and given the initial standard soldier training and then --upon promotion-- began her advanced Bane Spider training. However, she did not finish this training and never received her Nullifier Mace.

Despite Longbow protests, Agent Estrus has kept her Arachnos gear. These include her armor, cloaking device, surveilance equipment, firearms, and grenades.

Stacy Estavez, the oldest of four children, comes from an average family in Paragon City. Survivors of the East Gate explosion that led to the devastation now known as The Hollows, they currently live in Kings Row. Her mother works a part-time job waiting tables in a pizza parlor, and her father drives a delivery truck for the Paragon Times. She graduated high school at the bottom of her class and couldn't get into college with her grades. Not wanting to "waste" her life in the unexciting job of fast food worker like her mother, she turned to pornography as means to make money. Her first audition was with Longbow agents posing as casting executives and looking for ideal candidates to do undercover work within Arachnos. Though they have many agents more qualified for such assignments, they needed someone willing to do things... the kind of things a female Longbow agent may not want to do. Stacy fit all their "physical" requirements, would have sex for money, and still believed in the ideals of heroism and patriotism. They filled her head with romanticized thoughts about spies like Mata Hari and set her up with telepaths who helped train her to resist telepathic probes so she could maintain her cover. Then she received more --but brief-- training with espionage techniques in sending coded messages and maintaining her cover. Finally, she was given a new identity to protect her family in case she was discovered.

Once Stacy's crash course was over, she was thrust into the web. Longbow had her discreetly moved her over to the Rogue Isles where contacts helped establish her new identity. Other undercover agents already placed within Arachnos moved the plan along by insuring that she was recruited into Arachnos's troops and given basic training, then making sure she was noticed by key individuals. It wasn't long before Staci Estrus was removed from basic patrol duties and transferred to a guard position in St. Martial, and soon after assigned as one of a handful of personal guards for a man named Arbiter Jones. He was a man who enjoyed and routinely abused his authority within Arachnos, Jones took an immediate liking to his new guard and had her put into the Bane Spider training program. Eagerly cooperating with any order or request he gave, Staci quickly rose in rank, passing by others who were more qualified and talented. This didn't earn her any friends with her fellow soldiers, or any of Arbiter Jones' other "personal staff." As Operative Estrus, she became close to Arbiter Jones and gained access to his files and daily operations for Arachnos --exactly the kind of information Longbow had placed her to find and relay to them. However, this closeness brought with it another kind of closeness... the kind Longbow had selected her to deal with. As it turns out, Arbiter Jones was a lecherous man who liked to indulge in a great variety of sexual perversions. He usually used his influence as an arbiter to acquire young women to play out his fantasies and then make them disappear when he was bored. However, his elite guard were all women which he hand-picked for a combination of their effectiveness and appearance along with certain less professional attributes, and he would often have at least one of them participate in his nightly sessions of debauchery. Operative Estrus, a fresh young face amongst his more seasoned veterans, immediately became is favorite. As one of his elite, she was no longer required to wear the standard Bane Spider armor and was usually attired either in a professional business dress or something much more revealing. Proud of his new acquisition, Arbiter Jones frequently showed her off and had her put on impromptu sex shows for associates, sometimes even loaning her out for bodyguard duty which always meant she would have to sleep with the whomever she was guarding. 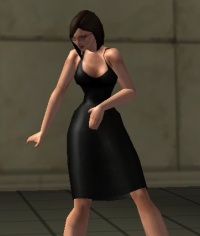 During this time, Operative Estrus found herself having more freedom to do as she pleased but was also more frightened of the attention focused on her. She was scared that any secrets she leaked back to Longbow would immediately be traced right to her and lead to her execution. Arbiter Jones was quick to kill those whom he suspected of betrayal and had the authority to kill whomever he liked without question. As such, when she started to make her reports back to her Longbow superiors, she only included the most basic of information. Enough to let them know she was still working for them, but hopefully not enough to alert anyone else that she was the spy within their ranks. The nightly degradation inflicted on her began to take its toll, though. Just having sex with Arbiter Jones she thought she could handle, but his perversions and the displays she was forced to endure for groups of people weighed heavily on her. After the first such instance, she included a request to be relieved from this assignment along with her reports to Longbow, but the only response she would get back were "mission incomplete, more intel required." After a particularly humiliating experience where she was the center of attention at an orgy held by Arbiter Jones, Stacy decided she needed to do something drastic. Her next report hinted at something big but that she needed a face-to-face meeting to deliver the info in case she was being monitored. A rendevous was soon arranged and Staci met up with an undercover agent at the Golden Giza. She demanded to be let out, but the agent told her that too much work went into getting her placed where she was to just abandon it without some sort of payoff. When she explained what was happening to her, the agent told her she was supposed to have been prepared for such an assignment and that she would have to continue the charade until something big occurred. As it was, her reports thus far enabled Longbow to stop a couple of weapons deals in Paragon City and prevent the kidnapping of one city official, but nothing substantial. "You're here to PUMP Arbiter Jones for information," he told her. "Maybe you just need to be reminded of why we worked to get you where you are." With that, he dragged her to the men's room and forced her to orally pleasure him. Afterwards, he told her again that she would need something big before her assignment would be over. Later, Operative Estrus was confronted by Arbiter Jones himself and asked what she knew of a man named Jon Smythe. She stared at him blankly before recognizing a security camera photo of her and the undercover agent she met with coming out of the casino men's room. She coldly explained, "I believe he's a Longbow spy." Jones nodded and confirmed as much. He had apparently been on the radar for awhile by now, but Jones left him alone so he could discover whom he was reporting to. He ordered Operative Estrus to continue her "investigations" and do whatever it took to find out who Smythe's contact is.

Staci contacted Smythe again and began setting up weekly meetings to deliver her report, usually in seedy hotel rooms or other convenient locations for sexual congress. She indicated ahead of time that she would be under surveilance and that he was now being regarded by her superiors as a potential threat. Smythe came prepared leaked non-vital secrets during their pillow play to help maintain her cover. After a few such encounters, he seemed to disappear and Operative Estrus's investigation went cold. When she reported this to Arbiter Jones, he merely nodded and incated that Smythe apparently died in warehouse explosion a couple of days earlier. Then he explained that he believed it to be a ruse because Estrus was too close and Longbow faked his death to get him out. "Just to be sure, however, I want you to kidnap his family and bring them here. We'll either flush him out... or I'll have some fun for a night." With that, he provided a dossier that revealed Jon Smythe to be Lester Thipsberg who had a wife, as well as a son and daughter both attending Paragon University in Steel Canyon. Estrus was to make her way across Siren's Call and slip into Steel Canyon to abduct the children first, then their mother. Once secured, they would be used as bait to lure the allegedly deceased Longbow agent out of hiding. Unable to contact Longbow, Staci had no choice but to go ahead with the plan until such time as she was no longer under Arachnos's watchful eye. She crossed Siren's Call as planned, then went to the nearest Hero Corps building and made her last official report detailing her departure from Arachnos, and finally her resignation from Longbow as well. She has since acquired new weapons and equipment appropriate to her training and has become a costumed hero to help her cope with her past actions and distance herself from Longbow's organized approach to battling evil.